Lagos State Government Reacts As Family Of 3-Year-Old Boy Cries Out For Justice Over Sons Death In Childcare Centre, Lekki

A Nigerian woman identified as Favour Pauls from Abia State calls out for help against her family who subjects her to dehumanizing conditions.

@Favourpauls, in an emotional post she shared via TikTok, documents the pain of sexual and domestic abuses faced at the hands of her 32-year-old older brother who has the support of their mother.

Favour who displayed scars she sustained from the physical abuse she suffered at the hands of her abusive brother, stated that while her brother assaulted and raped her, her mother believed he was instilling discipline in her.

According to Favour, her mother covers up the abuse while justifying it by protecting the family’s name.

In the emotional post, Favour sought help as she penned her pain;

SEE ALSO: ‘I’ve Been Waiting For My Mom To Die Before Telling My Story But…’ -Singer, Temmie Ovwasa On How She Was Sexually Abused By Her Stepdad From Age 11

“I am The Youngest Of My Family. I Brought this to social media because I need help. I have zero respect for anyone who supports or covers evil, especially families.

I am a Victim of Rape & Sexual Molestation by My Blood Brother & Through My Teens Since My Childhood He will hit me to instill fear in me as a child so that I wont expose how he sexually Molests me and my Mother supports and Covers him thinking he is disciplining me as a child, even After I Told Her, she found out, She Did nothing, That it’s shameful for her family image.

Why do African mothers cover the evil their sons do to their daughters like a female child doesn’t matter? I need help.

Media Personality, Vanexxa Narrates The Heartbreaking Story Of How A Negative Prophecy Ruined Her Family

The memories forever haunts me, I need help. I don’t know where to go, whom to run to or what to do.”

ALSO SEE: Singer, Temmie Opens Up On Why She Cut Off Ties With Her Mum 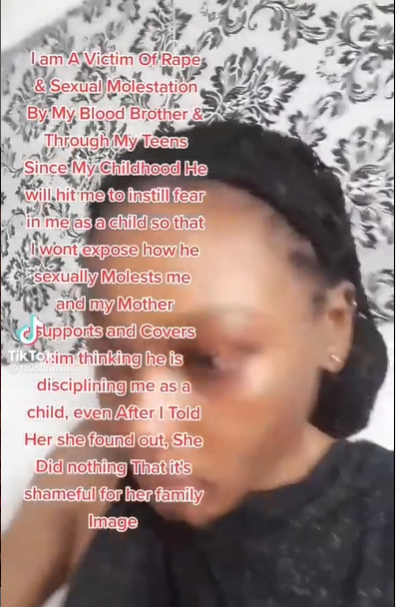 You can watch the Video here.