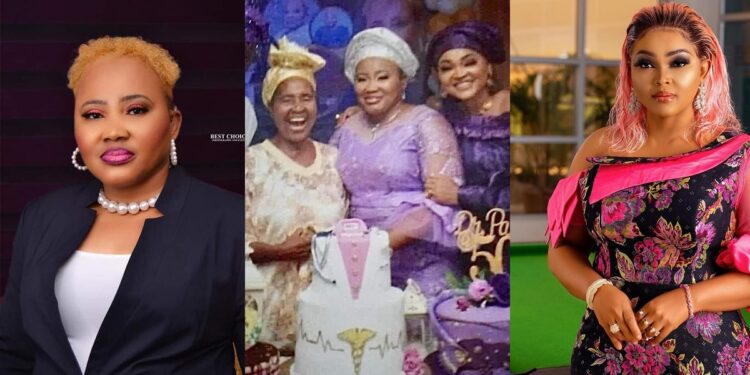 Is It Safe To Breastfeed While Pregnant? Here’s What Paediatricians Want Us To Know

Mercy Aigbe’s older sister, Dr. Patience Aigbekaen, has taken drastic measures to vent her resentment toward her mother by setting her home on fire.

According to sources, Dr. Patience set her mother’s house on fire a few days after calling out both Mercy and her mother on Facebook for practicing witchcraft and ‘stealing her holy destiny’.

Dr. Patience’s accusation that their mother is a witch and her use of her witchcraft activity against her in favor of her other well-liked daughter, Mercy, is the source of their argument.

On September 16, Dr Patience posted a photo of her mother and Mercy flanking her at her 50th birthday and she accused them of being evil.

She wrote at the time:

“My 50th birthday celebration last year on my mind today. The picture below is a classical depict of one surrounded by decadently first class, first degree pretentious relathieves.

A wickedly deceptive mother with inborn satanic evil greed on my right, and a younger sister who out of love for money and worldly lusts and pride of life, attempted temporarily ‘stole’ my divine destiny ( in her myopic inglorious foolishness she doesn’t know that microscope portion the devil can afford to steal for her is useless and to her eternal shame in a very short while) on my left.

Looking at the deceptive show of love and lying appearance NO ONE can never know! Both are avid church goers and same known in the kingdom of darkness. Smh

My prayer henceforth: ‘Daddy God am tired of these 2 burdens; am tired of being sentimental; am tired of hiding my pains with smiles; and tired of understanding they would repent as they continually take me for granted despite the long revelation from the Holy Spirit, of these household principality and an evil personality. Get them rid of me. Do the needful now, Abba Father remember  Isaiah 45:11’.”

SEE ALSO: ‘You’ve Been Sleeping With My Husband Since Your Son Was Only 5 Months’ -Kazim Adeoti’s First Wife Calls Out Newly Married Actress, Mercy Aigbe In Bitter Rant

The angry sister reportedly accused her mother of refusing to assist her in repaying an N800,000 loan she had taken, according to information from PM News. She also charged the elderly woman with favoritism.

According to the source, nothing could be saved from the house on Adebayo Mokuolu Street, across from Anthony Village Recreation Center in Lagos, as it was completely destroyed.

People in the neighborhood claim that the house belonged to their mother’s deceased spouse, for whom the elderly woman had only one son.

She was residing in the mini-duplicate that his father had given to her son, who happened to be Dr. Pat’s half-brother.

The structure is separate from the main structure, which is in front and has additional apartments.

Fortunately, the fire did not spread to the other apartments that belonged to the deceased man’s other children from his previous marriage. Dr. Pat reported herself to the police after destroying the structure.

Their mother was reportedly with Mercy when the fire started. A video shared online on Thursday, October 6, shows firefighters at the house trying to bring the fire under control.

ALSO SEE: ‘This Is The Second Home She Is Destroying’ -Insider Spills Grave Details About Newly Wed, Mercy Aigbe

Mercy later arrived at the residence in a black SUV to evaluate the property’s damage.

Dr. Pat was heard screaming that she would kill their mother before starting the fire, confirming the general public’s opinion that she had intended to burn the elderly woman in the house if she had been there that morning.

It was also claimed that after setting the house on fire, she reported herself to the police.

Currently, Mercy’s mother has no place to return to because the house was completely demolished.

Residents had been awakened earlier on Friday, September 30, by Dr. Pat’s commotion and screaming as she went on the rampage and wrecked her mother’s automobile.

Her mother, who suffers from arthritis, stayed inside while her enraged daughter tore up her car while also cursing at her.

Later, after her daughter had departed, the elder woman emerged to inspect the harm done to her car’s windshield, wipers, and front and rear lights.

Many others watched in disbelief as the visibly enraged woman wrecked the car while berating her mother and yelling “destiny stealer” at her.

This may help to explain why she wasn’t home when Dr. Pat arrived and started the fire, as she had turned the house over to Mercy’s because she thought her life was in danger.

Those in the know claimed that Mercy and Dr. Pat are actually half-sisters who have separate fathers but the same mother.

Reacting to the story, a fan of Mercy revealed that she was once a patient of Dr Patience. The fan, Odunayo Olalere Olajide wrote,

“I know this particular Dr, she is a gynecologist at Gbagada General hospital. She has hearing problem as such she uses hearings heard. Later got to know that she is depressed as she has only a son with no husband. I registered for my Anti natal at Gbagada General hospital where she works, she is always shouting and sad, so lots of us don’t go to her for check up. She attended to me at least twice when I was pregnant for my baby. I know her wella”

Revealing she has a son, one Sarah Mag Jackson wrote,

“This is mummy jerry she has a son and she has hearing problem she doesn’t hear clearly as of 2011 she was living with her mom in this house at Antony Estate Ikeja. I swear, this lady, she is so depressed and frustrated, they should go and check her brains because its not functioning well because the day I met her I accompany mercy aigbe with former hubby to the house from the airport with her mum came back from UK when her mom entered the house everybody was happy but that lady sat down and was looking she didn’t say a word every when Mr lanre gentry greeted her she didn’t answer on time, I swear she is not mentally balanced, L’m sure the family knows that she is not normal.”

“This said doctor is also deaf, heard she suddenly grew deaf in her final year in school. Mercy doesn’t support her at all, and most hospital will not want to employ a deaf doctor. Mercy and her mama get for hand.”

“She is just on the brink of psychological breakdown. A gynaecologist is saying her glory was used. Used to do what?? Is she expecting to be as popular as her sister who is her an actress?? I hope they sue her and make her pay. At her age, her mother should be paid her debts , who gives birth to a child and still finance them to this age?? What is there to like about a child giving you trouble at her age.”

“I heard of something like this about some one. According to the reliable source,the mother gave the Daughter all the glory to the other Children and truth be told the other children’s lives are miserable . I didn’t want to believe such Parents exist until I came across this post.”

Recounting how it happened in her family, one Lolafgod wrote,

“What some parents’ especially mothers will cause among their own children….same thing my mum did among my siblings…we don’t talk…our kids don’t talk..good for my mental health. Parents should learn to broker peace, love and unity among their children!”

“She used your glory and you are a gynecologist, madam you better go to a living church for proper deliverance, this is more like bringing curse on yourself”

“Not judging her or taking sides….but you see this preference thing parents do among their children when they’re little and growing up…this are the kind of things that build so much hate and anger between siblings when they’re grown…cause how would a grown person do this if not from built up anger and frustration….but again may we not give birth to kids that will call us witch.”