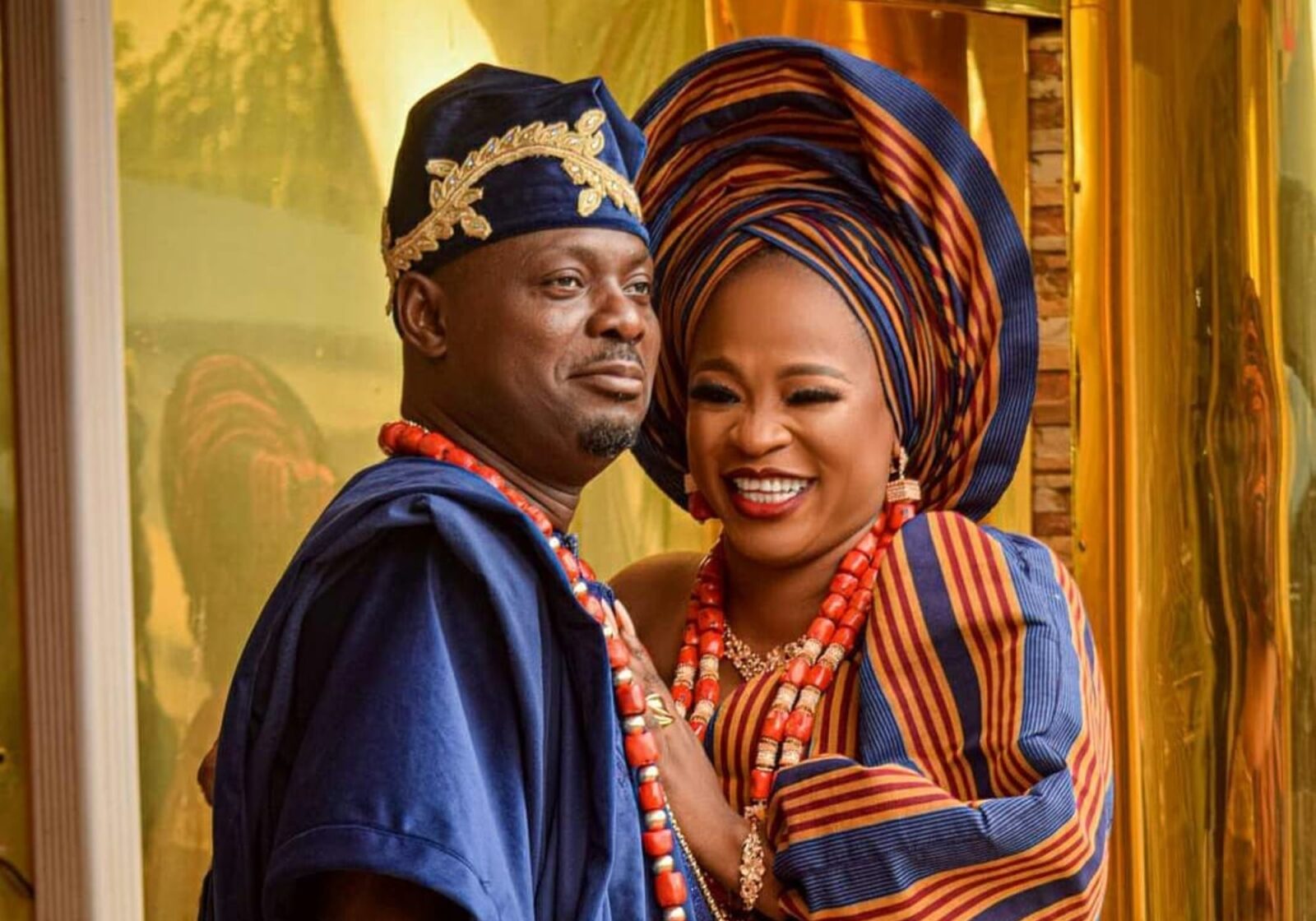 Actress and businesswoman, Desola Afod has announced that she is no longer with her husband, Kunle Afod.

The announcement is coming after years of fighting hard to keep her marriage despite her husband’s philandering attitude and embarrassments from his side chics and baby mama.

The mother of four boys confirmed the news on her Instagram page moments ago by deleting all their photos and also releasing a statement that reads thus:

“THE GOOD NEWS YOU WANNA HEAR, I LEFT KUNLE AFOD.” Months ago, it was reported that the filmmaker disrespected his wife by visiting one of his baby mamas in the United States of America who bore him his first child.

He didn’t stop there, he went ahead to post this online to spite Desola. In retaliation, she unfollowed him on social media and he returned the favour.

Also when the actor marked his birthday on Monday, October 24th, 2022, Desola failed to celebrate him on any of social media pages.

“This woman is not lying. She has deleted all their photos. The reason why she’s still bearing the Afod is that it’s not easy to change it on Instagram,”

a fan responded to Desola’s announcement moments ago.

SEE ALSO: Kunle Afod’s Wife, Desola Calls Out Actresses Who’ve Slept With Her Husband, Daring Them To Do This

Two months ago, the self-acclaimed ‘celebrity wife’ had a messy fight with a female troll who claimed to be pregnant for her husband.

The troll had taken a swipe at her actor husband who is known for his cheating habit. Mocking him, the troll claimed to be pregnant for him wrote:

“Afod wey his dick no stay one place. We don born for ur husband”.

Desola, who was left furious at her comment, didn’t hesitate to lash out at her. She dared the troll to use her original account to face her. However, Desola vowed never to leave her husband no matter what.

That wasn’t the first time Desola would fight dirty with trolls. She knocked a troll who accused her husband of having an extramarital affair with a lady in Ibadan, Oyo state.

“Why do you want to kill yourself for a man that does not LOVE you. Na only you dey love up and down. Which dirty Afod husband are you praising. That has another wife in Ibadan and she is presently Pregnant and they both planning engagement soon you will hear the news.”

Responding to the troll, Mrs Afod revealed she would not leave her husband no matter the circumstances or his wrong deeds.

“Use your original account … make AFOD fuck your mama! Make every woman born for am … they will be slaves for my children and I won’t LEAVE HIM gan sef…I don’t need him to love me … as long as I do WE MOVE.”

Desola had blown hot at those spreading rumours about her marriage. She didn’t hold back at lashing out at those wishing her marriage ill luck.

Her outburst came after faceless blogger, Gistlovers exposed the dirty things the celebrity wife put up with to remain married.

Gistlover described her husband as a public toilet who was fond of sleeping with his film school students, which Desola was fully aware of. The blogger also spilled on how Desola snatched Kunle Afod from her friend at a birthday party.

All these your local caption won’t make any difference. Olorun ngbo. You wey dey do like werey wan die there. No be second wife you be ni. No be queen Oluwa born first born ni. No be for birthday you jam kunle ni.

You are shielding a man sleeping with his student just to give them roles this kind woman if you born girl and kunle put prick for the girl yansh you go cover am iku loma pa together forever.

No be you I get issue with na Kunle. Stop doing like a razzo. Must you always show the Omo mushin in you. Take time oooo (Gentle warning). I come in peace”.

Reacting to it, Desola shared a loved-up video with her husband.