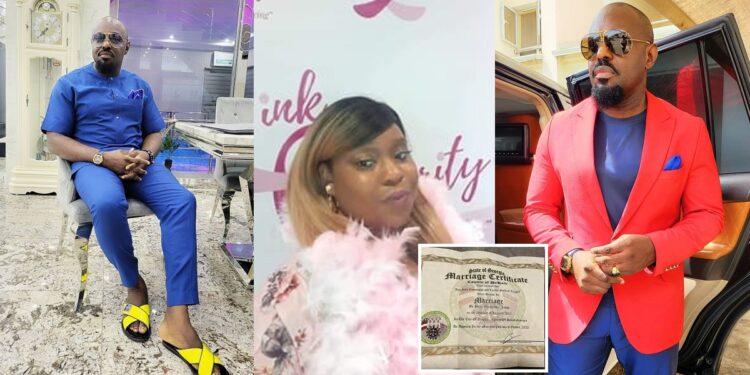 Ex-president Olusegun Obasanjo Speaks: ‘How I Have Survived Diabetes For 40 Years’

Nigerian actor, Jim Iyke has been called out by an American lady identified as Carllie Taggett.

Taggett, in an interview with Legit NG, claims to be married to the popular Nollywood star and presented a purported wedding certificate as evidence, insisting that their union is still legally binding in the US.

Giving more details, the young woman said she and Iyke got married  in January 2017 at Delkab County after which a marriage certificate was issued to them.

She however claimed that the actor has abandoned their marriage, stopped taking her calls and blocked every form of communication with her. She also accused him of “keeping secret families in different parts of the world such as France and Africa.”

Describing the actor’s action as “unacceptable”, Taggett demanded for a divorce on grounds of abandonment so she can move on with her life.

She stated that the 46-year-old movie star must fulfil the legal requirements for a divorce proceeding in America with the attendant spouse benefits.

She demanded that he be a man and divorce her officially.

ALSO SEE: Is Jim Iyke Saying He Has Been Married for 4 Years With 3 Kids? | WATCH

“It has been a pain I bore all these years, I have tried to be reasonable to understand why he abandoned our marriage without a divorce, but he has been evading me, that is why I decided to call his attention, pending when he decides to be reasonable or face the consequences of his actions in marriage court in the US.

“All I have always asked is for Jim Iyke to be a man and come out to give me a divorce so that I can move on with my life because it is impossible to be remarried while my marriage to him is yet to be dissolved through a legal process.

SEE ALSO: Twice Divorced, How The Death Of His Mom Crashed His Marriage, Obsession With His Three Kids: Jim Iyke Bares All In Latest Interview

“Let me reiterate the point that no one is against him, I just want him to voluntarily come to divorce proceedings or he can take the initiative of coming out for us to settle outside of divorce court if he is serious about it.”