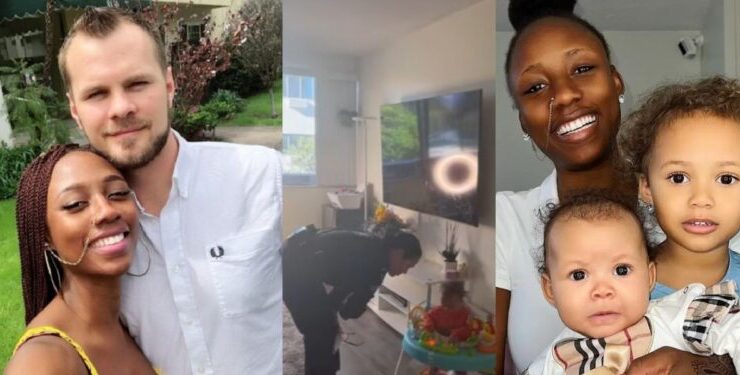 The custody battle between Nigerian dancer, Korra Obidi and her estranged husband, Justin Dean seems to be growing worse by the day.

In a new court update, the former couple have been issued a stern warning to avoid posting their two kids, June and Athena on social media.

To add to it, they aren’t allowed to take video or live-stream any interaction between the parties in the matter until further court order.

The court order read in part:

Neither party may take video, photos or live stream any interaction between the parties in this matter until further Court Order.”

SEE ALSO: Korra Obidi Tearfully Narrates Abuses She Allegedly Suffered In Hands Of Ex-husband As He Begins Another Round Of Court Battle

A day ago, the 28-year-old mother of two took to social media to cry out over their unending drama.

While many thought that the ex-couple had settled their marital issues following their divorce, Korra proved them wrong as she has raised alarm over Justin’s ploy to separate her from her kids.

According to her, their first child, June’s constant demand for food had left Justin believing that Korra doesn’t feed their kids and has once again taken her to court.

Korra claimed that Justin was physically assaulting her throughout their marriage, hence, her concern for her daughters safety.

Recall that before their divorce settlement, Korra had raised alarm after Justin set the police on her.

Korra had voiced out over her ex-husband continuous harassment. She revealed that Justin had set the police on her, in a bid to get full custody of their two daughters.

ALSO READ: ‘At This Point…’ -Korra Obidi Fumes As Ex-Husband, Justin Calls Police On Her | Watch

The entertainer shared a video of a police officer at her home to check on her youngest child, Athena for injuries.

Korra told the officer that Justin lied about her daughter, Athena falling down. She claimed to have given Athena to Justin in perfect condition.

Captioning the video, Korra stated that her ex was stalking her.

Justin announced in March 2022 that he was divorcing Korra, just days after she welcomed their second child.

Their divorce was finalised in November 2022.