Dear MIMsters: How My Husband Finally Stood Up For Me Against MIL’s Excesses

A terrifying incident which could happen to anyone left mum Laura Lou Chambers shaken. Laura in a Facebook post appealed to other mums to be watchful after she watched her toddler claw at her own throat choking on a ‘harmless’ snack.

The mum-of-two, from Nottingham, reveals she’s normally fastidious about halving grapes before giving them to her kids. But on this occasion, for the first time, she had a lapse as she made them a snack. What happened thereafter is the nightmare of any parent and Laura wants every other parent out there to not be careless.

READ ALSO: Choking Hazards: What To Do When Your Child Is Choking

Luckily, laura’s daughter recovered from the mishap but the mum says her life nearly changed forever because of that carelessness and she’s pleading with other parents to learn from her experience.

“I made her and Oscar a snack, handful of grapes and some dried cereal, It was the first time since hearing about that poor child who died choking on a grape that I didn’t cut them in half.

I figured – she’s almost 5, she isn’t the kind of kid to shovel food and choke, and I was rushing to finish cleaning the house.

So off she went upstairs with her bowls of snack to carry on playing with her brother.”

I continued hoovering, luckily I’d switched it off when I heard her at the top of the stairs. I knew in an instant what had happened. I ran to her. She couldn’t breathe.”

She had gone to chew a grape and it had shot to the back of her throat, gone down and got wedged.

I turned her over and hit her as hard as I could between the shoulder blades and still nothing. She was looking me dead in the eyes and her lips turned blue as she couldn’t breathe.at.all.

Jamie finally managed to perform some manoeuvre on her that sent this grape pictured flying across the room.

I lay here now watching her sleep I’ve cried most the night and my heart hurts as I look at her chest where there are still nail indentations from where she clawed at her throat for air.

PLEASE PLEASE let this be a reminder to all the parents out there – my life nearly changed forever last night all because of my carelessness.”

TESTIMONY! Why This Nigerian Man, Anthony Ohiorenoya Is Speechless With Joy After 11 Years Of Marriage

READ ALSO: What to Do if Your Child Chokes on Something

Having recounted the heart-stopping tale, Laura Lou’s warning has now, in turn, been shared tens of thousands of times. Other parents revealed similar incidents had happened to them.

“This also can happen sausages … Cut all sausages length ways to kids.

More kids choke on grapes and sausages than anything else.”

See photo of how to serve your child grapes: 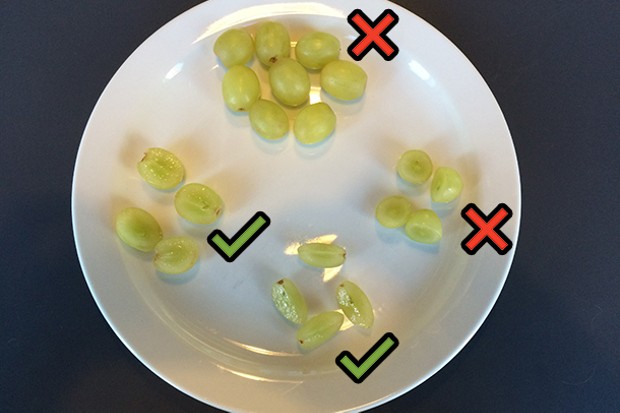