Are You Still Hurting And Pained From Past Relationships? Then You Should Read This…

It will be recalled that model Fancy Acholonu had disclosed that her ex-fiancé, actor Alex Ekubo, was never intimate with her for the five years of their dating. According to Fancy, Alex hinged his decision not to have sex with her on the grounds of religious beliefs.

Reacting to Fancy’s revelation, Freeze in a piece shared on his Instagram page, argued that the scripture never considered it sexual immorality for a couple who are betrothed to have sex before marriage.

Freeze, whose then fiancé (now wife) admitted to having an affair with him and getting pregnant for him while still legally married and living with her now ex-husband (Read Here), used several verses in the bible to back up his claim.

Buchi has however countered Freeze’s opinion. He also shared several bible verses which he used to argue that sex before marriage is a sin.

Read his tweets below…

“Dear Daddyfreeze, you made a post stating that sex before marriage isn’t a sin. My rejoinder: – Sex before marriage was tacitly and explicitly refered as a sin in the Bible. The first marriage in the scriptures was between Adam and Eve. Let’s critically look this. – A THREAD

God created Adam, and shouldered him with the responsibility of taking care of the garden. In his stewardship, God saw he was lonely, and made him a helpmeet, Eve. After Adam and Eve clasped as one, the first two commandment to them was: “Have dominion over the earth” and “Be fruitful and multiply”.

Many other translations phrase it as “Be fruitful and increase in number…” Biological population would have been impossible without sex, and this instruction to increase in number was given after Adam and Eve became one.

Biblically, you should only get intimate and multiply with “the bone of your bone…” which legitimizes marriage as the appropriate context for sex. You founded the etymology of ‘fornication’ and explained it away as just prostitution in a linear perspective.

I saw your reference to the book of Exodus, and we must see the role of the Jewish tradition interplaying in the mix. You quoted Exodus 22:16: “If a man seduces a virgin who is not pledged to be married and sleeps with her, he must pay the bride-price & she shall be his wife.”

But you miss a logical context: according to that text, marrying a woman you’ve deflowered was a punishment. It wasn’t the ideal reality and optimal practice. Would you say that legal penalty is a reflection of what the law requires of us to do if we didn’t commit a crime?

There’s penalty because there’s abhorrence of the law. So, your point there was a miss. A big miss. Now, there are other laws there, do they apply to Christianity? No! Like, however sacrifices to any god other than the Lord must be destroyed. It’s in the verse 20 of that chapter.

If you support premarital sex with that verse, you should be consistent with every other law there. In the gospel, it’s clear: Jesus raised the bar of fornication from the actual act to the imaginative action of lust. If a man lists after a woman, he’s committed adultery.

And Paul states in the preceding chapter that a man who sleeps with a whore is united and becomes one with her because “the two shall become one flesh.” Isn’t it clear? Sex before marriage is a sin. Simple. If sex must happen, it should consummate marriage.

You also said in your piece that there’s nothing wrong in sampling who you wanna marry as a Christian. No. Sex was created for marriage, and sin is abuse of order. Once sex happens out of marriage, many repercussions abound. Shalom.”

“Dear Daddy freeze, Paul states that if we can’t control ourselves, we should go ahead and marry, for it’s better to marry than to burn with lust. – 1 Corinth 7:9. How is sex before marriage not a sin?

If you discover that the person you’ve been in a chaste relationship with has been philandering around, you shouldn’t regret keeping yourself. We keep ourselves ‘cos it’s God’s commandment, not for man or woman. You did what was right, they think they played you. Shame on them!

This year, don’t go with the flow! You’re not menstrual cycle. Last year, you went with the flow, na so water carry you enter deep blue sea! This year, define everything! No endless talking stages, you’re not a radio! Stop giving relationship benefits to uncommitted people.”

ALSO SEE: ‘I Never Believed Relationship Without Sex Could Work’ -Newlywed Woman Reveals As She Shares Her Unique Love Story 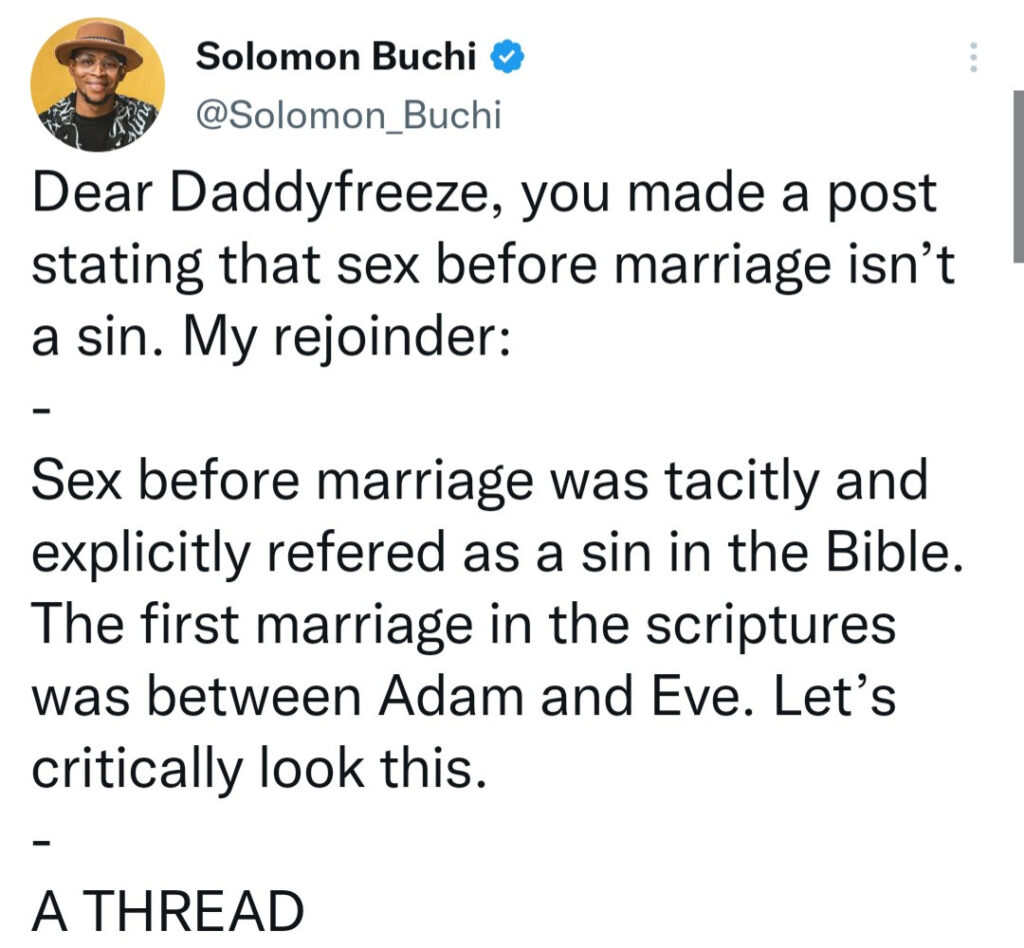 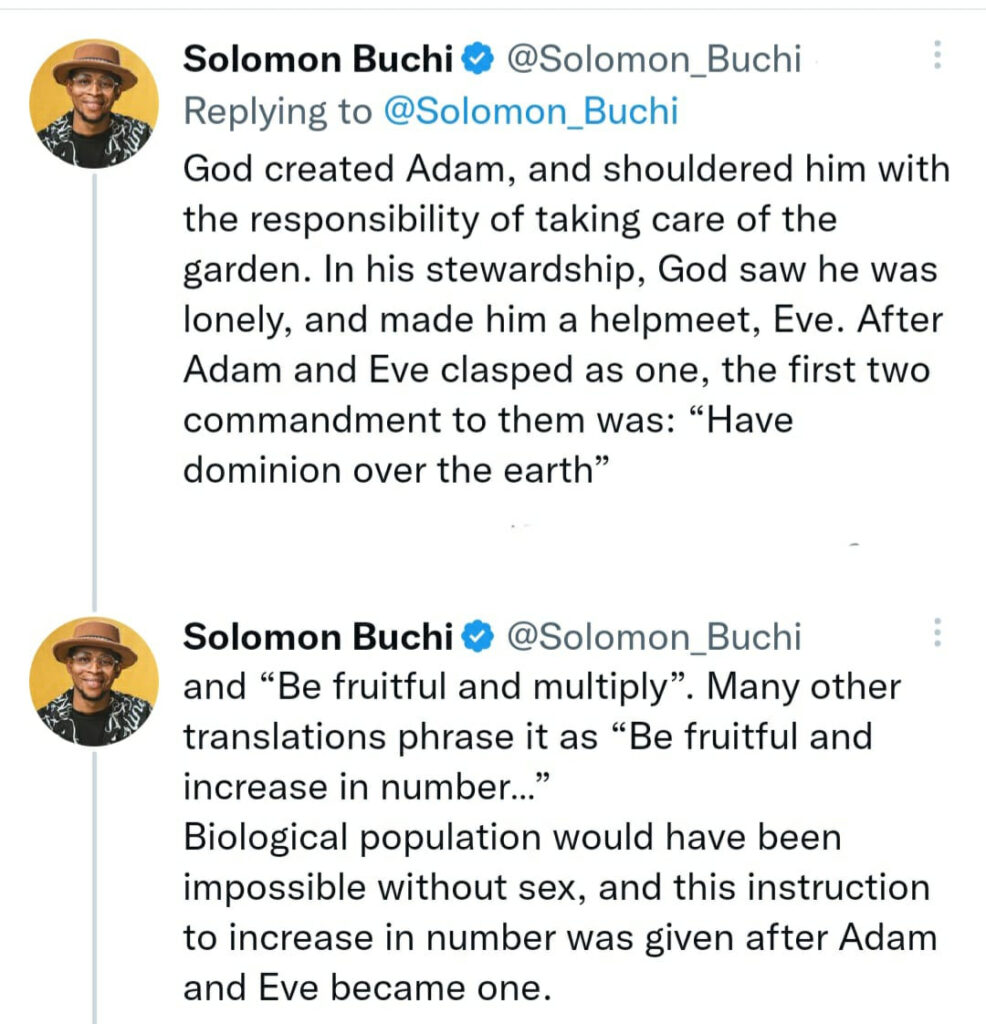 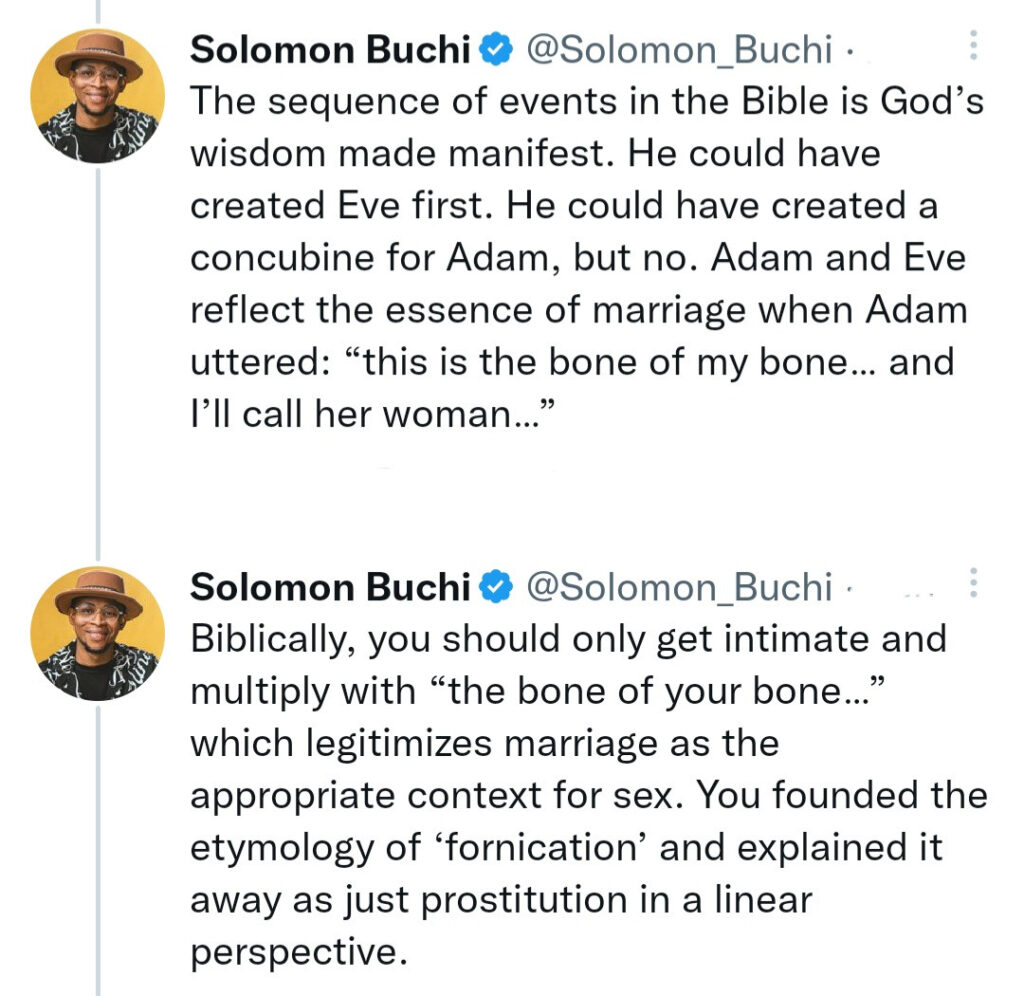 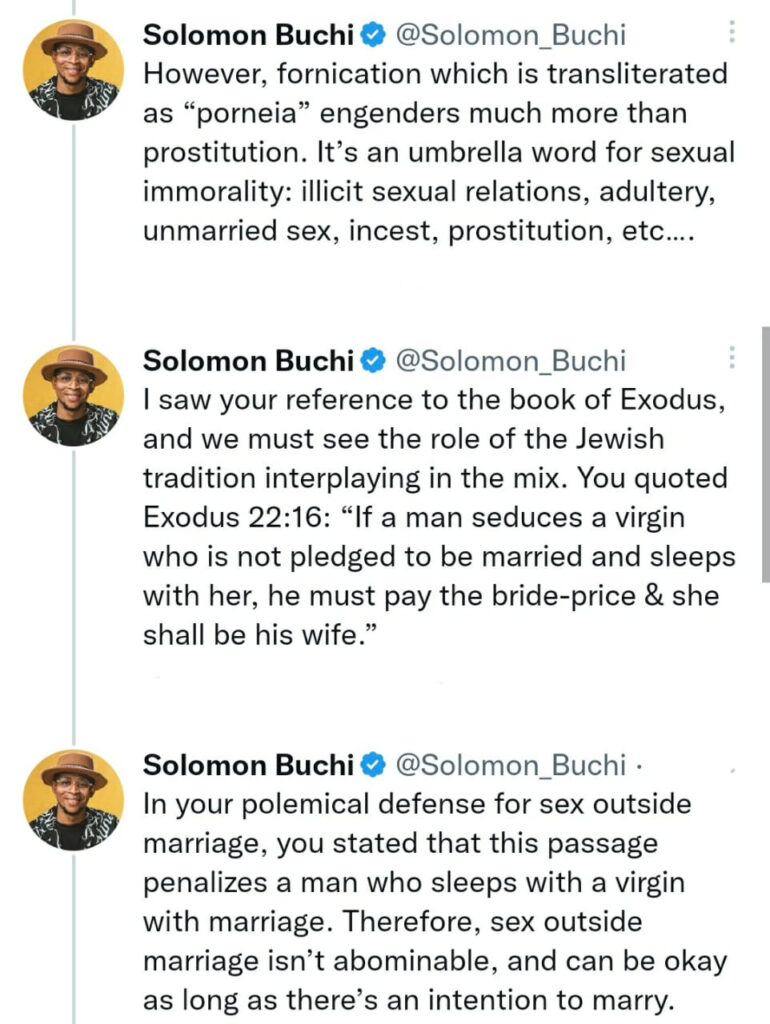 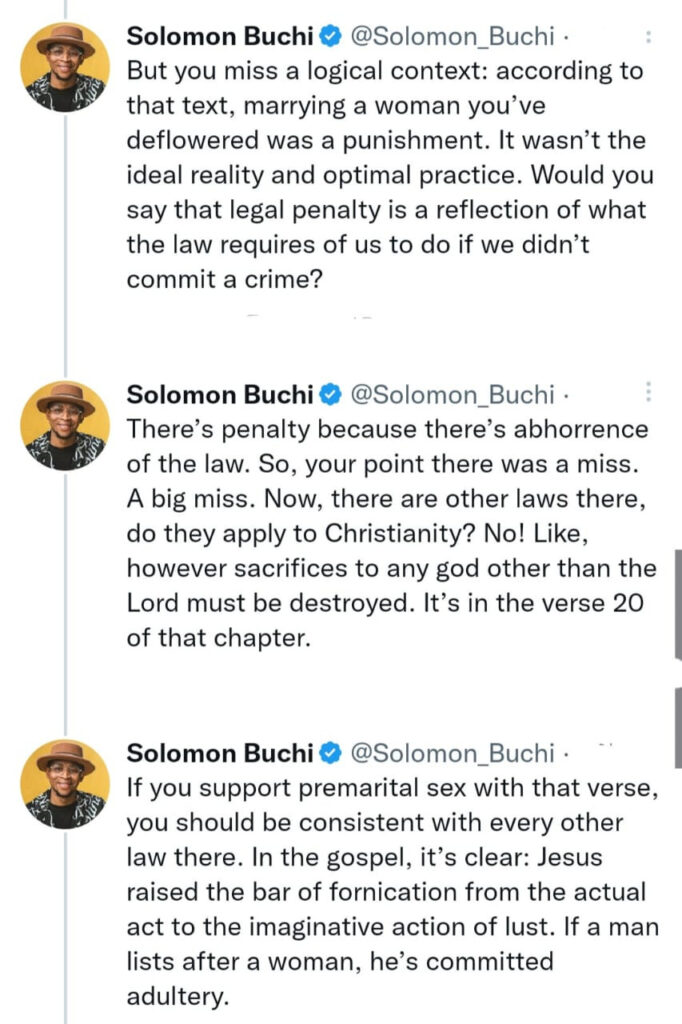 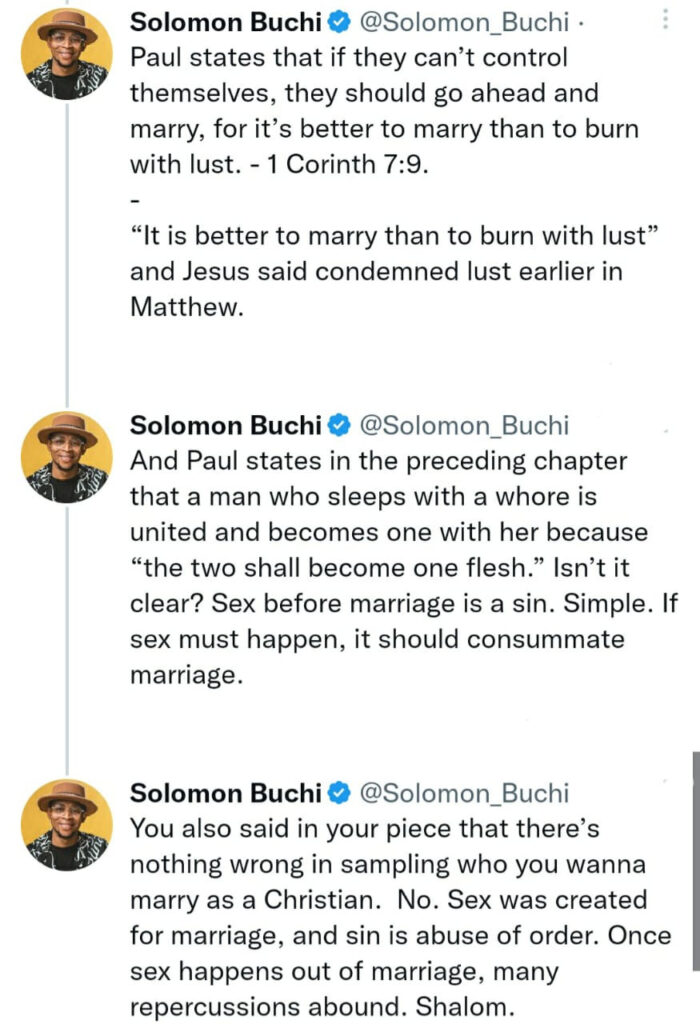