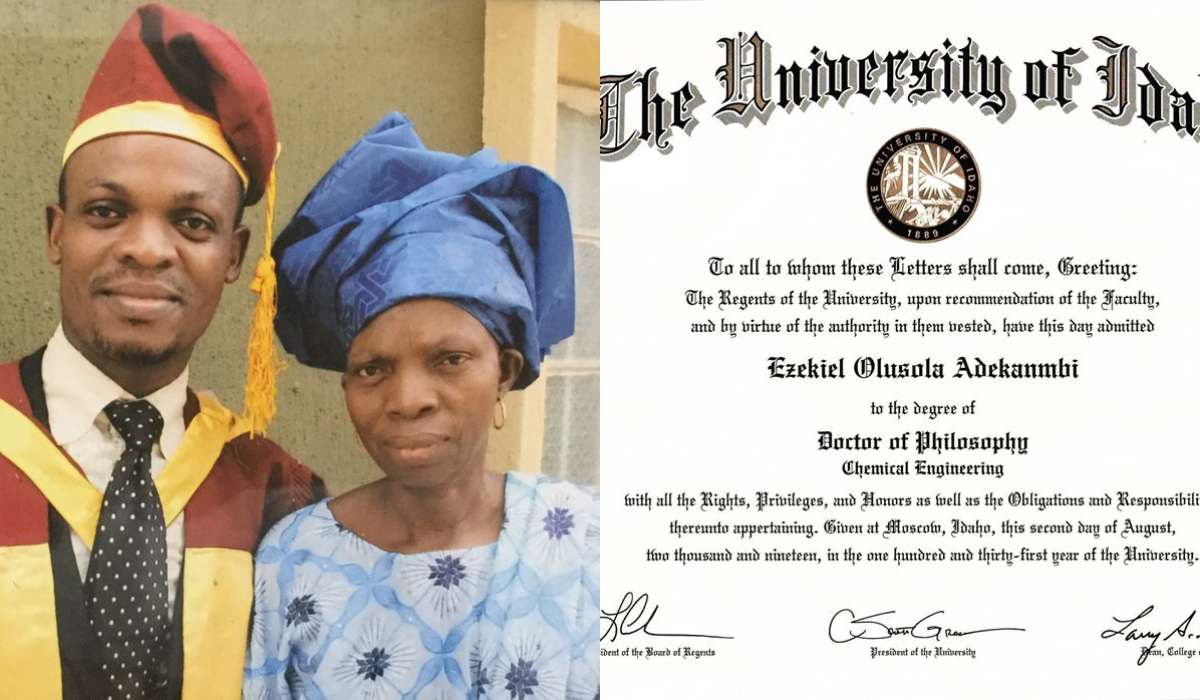 He detailed how poverty and growing up fatherless caused him to become angry and destructive, but for his mother’s whip, which he said hardened him initially and her constant drumming it in his ears that “Education is the only way out of our pathetic situation. My son, read your books”, Adekanbi said he would not have made much of his life.

Adekanbi who shared a photo of himself in his graduation smile with his mother at his side, said he went from hawking bread to achieving this feat. Even though he made wrong turns sometimes, he eventually listened to his mother’s advice due to her consistent guidance. Ezekiel says he is grateful.

He skidded off the right path often but would return home as the prodigal son and his mother was always there to remind him to focus on his education. He applauded his mum, whom he says single-handedly raised her 5 children.

Many years later after having a tough childhood and he has every reason to be grateful to God and his mother who tried her hardest to send him and his siblings to school despite being poor.

“GOD HAS A PLAN FOR EVERY CREATURE, ESPECIALLY ME!

I received my PhD certificate in the mail today and could not hold back my tears. I kept reflecting on how my mother would make me hawk 2 dozens of bread every morning before heading to middle and high schools.

I chose the path of the prodigal son by occasionally moving out of our home at age 10, sleeping in the markets, and sometimes in the mosque or the church beside our house. However, whenever I decided to go back home, my mother would ring it in my ears;

“Education is the only way out of our pathetic situation. My son, read your books”.

Every now and then, people would come to her that her son had destroyed one thing or the other. She beat the hell out of me. But the more she beat me, the more my heart became hardened. I just wanted to be independent of her.

Her rules were too stringent. At age 14, things turned around. I had learnt how to play the piano. The more I played songs of praises and hymns, the more my mind became renewed, the more I listened to my mother and the more I allowed God to work through me. I gave my life to Christ, and was confirmed into the body of Christ at Christ Anglican Church, Ogere Remo, Ogun State, Nigeria. Today, the rest is history. I am now a PhD holder!!!

This certificate is dedicated to my mother. Despite making a profit of N120 ($0.3) per day from her business, she sponsored the five of us beyond high school.

God has a plan for every living creature. No matter how stubborn and anti-Jesus your child may be now, with prayer and trust in God, your child will come back home.

It is written, every knee shall bow and every tongue shall confess that Jesus Christ is Lord. The Lord that changed Saul to Paul can change your son in the same manner he changed me. It pays to give ones’ life to Jesus and allow Him to take over. Thank you Lord, for your blessings on me!!!” 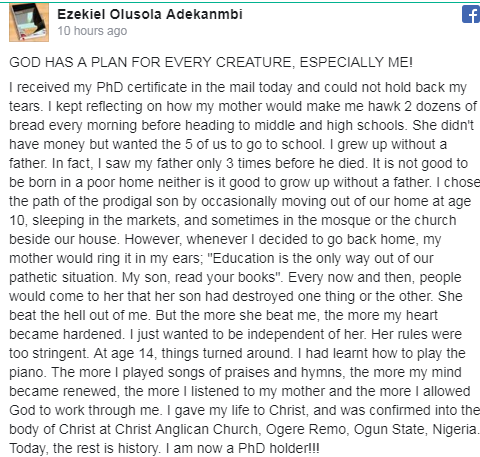