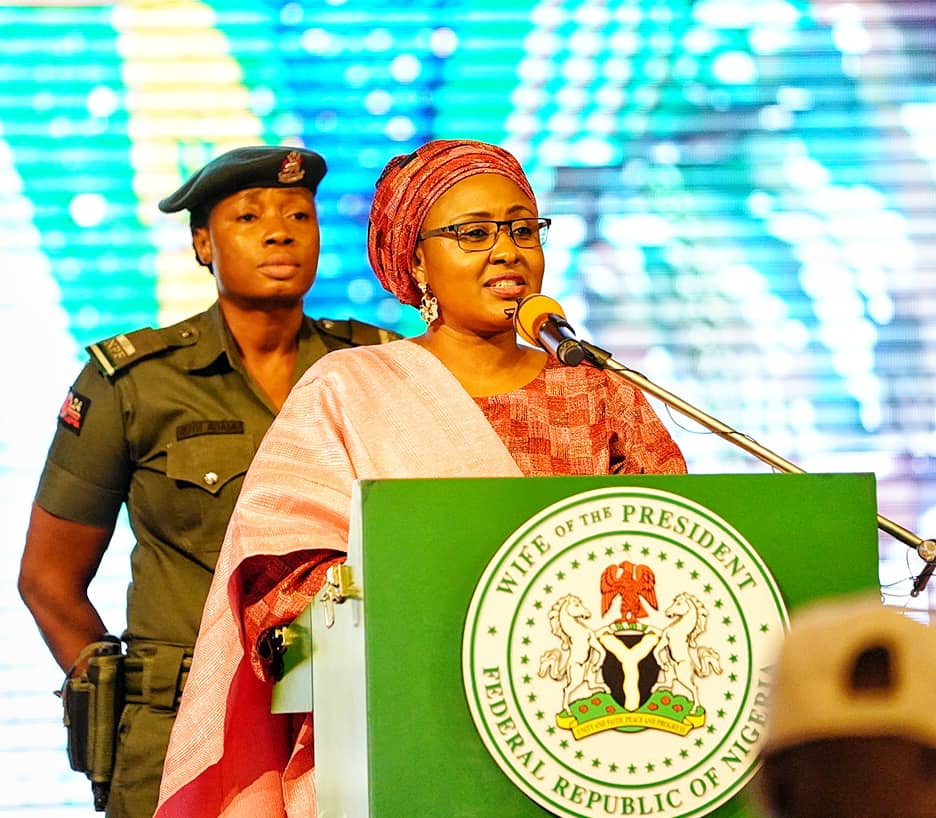 Nigerian First lady, Aisha Buhari has reacted to the recent high profile revelation of sexual abuse cases in institutions of higher learning in the country, which was released by the BBC on Monday October 7th.

The documentary titled Sex For Grades which has generated a lot of reactions since its release, showed how male lecturers in the University of Lagos and the University of Ghana sexually harass their female students and compromise academic standards in the process.

The Nation reports that the wife of the president on Tuesday called for thorough investigations of all sex-for-marks cases in the country. She made the call at the 4th Edition of Voice of Women (VOW) Conference at the NAF Conference Center, Abuja.

Mrs Buhari urged for stiffer penalties for offenders in order to act as deterrence. A statement by the Special Assistant to the President on Media and Publicity, Office of the First Lady, Aliyu Abdullahi, reads:

“She drew attention to the rampant cases of abuse especially in institutions of learning as exposed by a recent BBC documentary, and called for a thorough investigation of all reported cases and overhauling of codes of conduct in Nigerian Institutions to accommodate stiffer consequences on offenders.”

At the event organized by Women Radio in conjunction with the Voice of Women Foundation, the First Lady was honoured as Woman of the Year 2019.

In her acceptance speech, Mrs. Buhari said the award will spur her to do more to protect, advocate for and defend Nigerian women and girls at all levels.

While declaring the conference open, Mrs. Buhari noted that Nigerian women are still far from where they want to be, but are also not where they used to be.

She informed the conference that, Nigerian women and girls have more access to educational opportunities as shown by the increase in enrolments of young girls in schools across the country.

She noted the importance of advocacy and commended the founder of Women Radio, Lagos, for giving women a voice, promising to support the advocacy by announcing the establishment of a new women-focused radio station in Abuja that will focus on developmental issues as a whole, the new radio is expected to commence test transmission in a few weeks.

Convener of VOW 2019 and founder of Women Radio, Toun Okewale-Sonaiya, in her welcome address, said the conference has become an annual cornerstone event where key stakeholders congregate to reflect, deliberate and re-strategize a comprehensive action plan to advance the women agenda in Nigeria.

She noted that 2019 will be remembered “as the year Nigeria women and girls collectively started speaking above whispers challenging the culture of silence and the institutionalized commodification of our body as a means to an end throughout our lives” and hoped that conversations from the event will set the collective agenda for socio-economic and political advancement of Nigerian women moving forward.

Wife of the Vice President, Mrs. Dolapo Osinbajo in her remarks called on women to elevate their thoughts, words, ideas and actions in order to elevate Nigeria.

An award was also presented to the Governor of Kwara state Alhaji Adulrahman Abdulrazaq for his support in elevating women in his State.