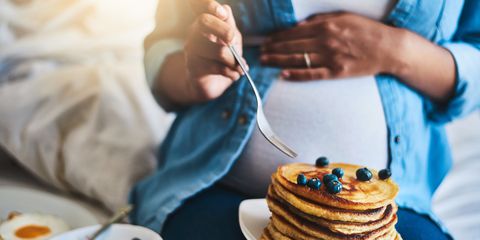 Many mums admit to having cravings as well as a longing for an extra helping of food when they are expecting. This habit is often understandable and excused for pregnant women. New research however suggest that the culture of eating-for-two by pregnant women could be harmful and could pose some health risk to both mother and child.

Studies show that improper nutrition during pregnancy can affect your child’s risk for developing problems as an adult, including heart disease, diabetes, high blood pressure, and obesity.

Published in the journal ‘Diabetologia’, the study shows that if a woman gains too much or too little weight during pregnancy, it can have adverse effects on their child.

Experts agree that it is a major diet gaffe for expecting mums to eat for two, not only does overeating put you at risk of gestational diabetes and hypertension which could be a precursor to developing preeclampsia, losing all that weight after delivery can become stressful.

According to Dr Raul Artal, M.D., chairman of the department of obstetrics, gynecology and women’s health at St. Louis University School of Medicine.

“If you develop preeclampsia, there is a higher risk for poor fetal growth and a complicated delivery while gestational diabetes leads to bigger babies and a higher C-section rate.”

There is however an interesting twist to the foregoing, according to experts, expecting mums who eat too little for fear of overeating or excess weight gain are no less prone to risks, maintaining balance is the key to mother and child safe health.

Nutritionist Confirms A Major Danger Of Poor Diet During First Trimester Of Pregnancy | MUST READ!

Lead researcher,  Professor Wing Hung Tam who totally believes that it’s crucial to educate women about the implications of pregnancy weight gain and to dismiss the “eating for two” theory, also said

A pregnancy requires an extra 300 kcal per day. What a pregnant mother needs is a balanced diet meeting such requirements with adequate micronutrients.

They also need to have moderate exercise to avoid putting up excessive weight gain.”