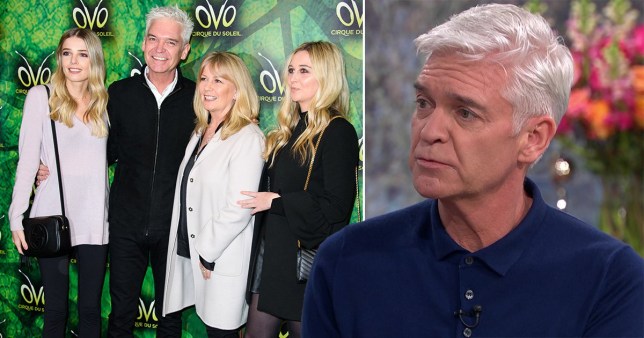 In what was more of a shock to his family and friends, U.K TV presenter, Phillip Schofield, has revealed he is gay after 27 years of marriage. The popular On Air Personality made the announcement via a statement posted on his Instagram story.

According to the father of two:

“You never know what’s going on in someone’s seemingly perfect life, what issues they are struggling with, or the state of their wellbeing – and so you won’t know what has been consuming me for the last few years.

With the strength and support of my wife and my daughters, I have been coming to terms with the fact that I am gay. This is something that has caused many heart-breaking conversations at home.

I have been married to Steph for nearly 27 years, and we have two beautiful grown-up daughters, Molly and Ruby. My family have held me so close – they have tried to cheer me up, to smother me with kindness and love, despite their own confusion.

Yet still I can’t sleep and there have been some very dark moments. My inner conflict contrasts with an outside world that has changed so very much for the better.

Today, quite rightly, being gay is a reason to celebrate and be proud. Yes, I am feeling pain and confusion, but that comes only from the hurt that I am causing to my family.

Every day on This Morning, I sit in awe of those we meet who have been brave and open in confronting their truth – so now it’s my turn to share mine.

This will probably all come as something of a surprise and I understand, but only by facing this, by being honest, can I hope to find peace in my mind and a way forward.”

READ ALSO: 21-Years After His Death, John Fashanu Opens Up On How He ‘Bribed’ His Gay Brother, Justin, To Conceal His Sexuality & His Many Other Regrets

However, after this announcement, Phil has confirmed he is not looking for a new relationship as his romantic relationship in his marriage is over.

Emotional co-star Holly Willoughby asked if he was looking for a new partner, to which he replied:

“No, I don’t think so. I’m not going there. I’m doing each day at a time. This has always been a slow process.

This was the big day and this is the day I knew everything was pointing towards.”

When questioned about how his wife is coping with the situation, he says:

“Yeah, it’s tough, but this is not something that’s happened quickly, I’ve had to deal with this in my head for quite some time. We’ve been honest and open.

Steph, I can’t write in any statement what I feel about that woman. She’s amazing, she’s incredible. There is no one in my life who would have supported me the way… as a wife, as the way she’s supported me.

He is happy his wife and his family at large are supportive of him, even though his wife is still trying to come to terms with all these, she has been supportive as well.