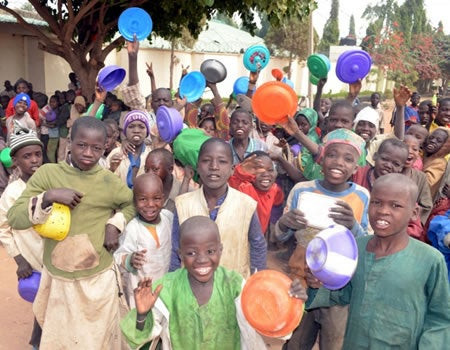 Kano State Governor Abdullahi Umar Ganduje has taken a giant step in the right direction and banned street begging in the state on Tuesday. The Governor said the action is to fully consolidate the free and compulsory primary and secondary schools education of the state with a clear integration of the Almajiri system to the policy and by way of addressing the lingering problem of the social menace of begging.

He made this known during the launching of Basic Education Service Delivery for All (BESDA) and Distribution of Offer of Appointment to 7,500 volunteer teachers, held at Sani Abacha Stadium, Kofar Mata, Tuesday.

A statement issued on Tuesday by Chief Press Secretary to the Governor, Abba Anwar and forwarded to Solacebase said Ganduje explained that;

“This policy of free and compulsory basic and secondary education goes along with it integration of our Almajiri system into the mainstream policy implementation. Which suggests that English and Arithmetic must be included in the Almajiri schools curriculum.”

This, according to him would go a long in giving those kids another type of education,

“….while they will continue acquiring their study of the Holy Qur’an, they would at the same time learn English and Arithmetic, that will give them an opportunity to continue with their studies to secondary schools and beyond,”

READ ALSO:Emir Sanusi Does Not Spare Deadbeat Fathers In His Latest Speech

A total number of 8,000 newly recruited teacher volunteers under the BESDA program are employed and were given letters of appointment,

In the statement, the governor warned that henceforth any Almajiri teacher with such pupils under Almajiri school arrangement must accept the new approach put in place by the state government, explaining that,

“If you think you cannot accept that, then you leave the state!”

When beggars are caught, the governor added, it is not only that beggar that is caught, but his parents and/or guardians, according to the governor would be taken to court for disrespecting our laws. At the occasion, 8,000 offers were distributed to the newly recruited teachers who hold National Certificate of Education (NCE), all from the 44 local government areas of the state.

Minister of Education, Malam Adamu Adamu, commended the effort of the state government in the education sector, adding that what the state is doing under the new policy is exemplary. He was represented by a Director from the Ministry Mrs Liman.

Also, the State Chairman of State Universal Basic Education Board (SUBEB), Dr Danlami Hayyo reveals that, apart from construction of new classes and renovation of many, they were able to produce 16, 327 3-Seater chairs for the schools.

The program was attended by many development partners and other federal government agencies. Among the dignitaries who graced the occasion were the Emirs of Bichi, Gaya, Rano and Karaye. While the Emir of Kano who is out of the country sent a representative.