At the early stage of the imposed lockdown due to the COVID-19 pandemic, there were reports of mysterious deaths in Bauchi state. Investigations have now revealed the cause to be unsafe abortions and not Coronavirus as rumoured.

It seemed far-fetched that many women turned to unsafe abortion methods when a medical expert raised the alarm a little over a week ago, but new reports corroborate how popular the trend was with some women.

An investigation carried out by the Bauchi State Primary Healthcare Development Agency has revealed that illegal abortion by unqualified medical practitioners is the cause of mysterious deaths in Azare and other local government areas in the northern part of the state.

At least 200 women have died in Bauchi as a result of this and there are projections that the number could be more at the end of the investigation.

The Executive Chairman of the agency, Dr Rilwanu Mohammed, who disclosed this Friday, May 29, at an interactive session organized by the Bauchi State Public Health Media Network, said the investigation had not been concluded on the development, but preliminary findings had revealed that the number of such deaths was about 200, adding that the number could be more at the end of the investigation.

Mohammed said the deaths resulted from unwanted and unplanned pregnancies by both married and unmarried women of childbearing ages who, after becoming pregnant, visited quack health workers to terminate the pregnancies. 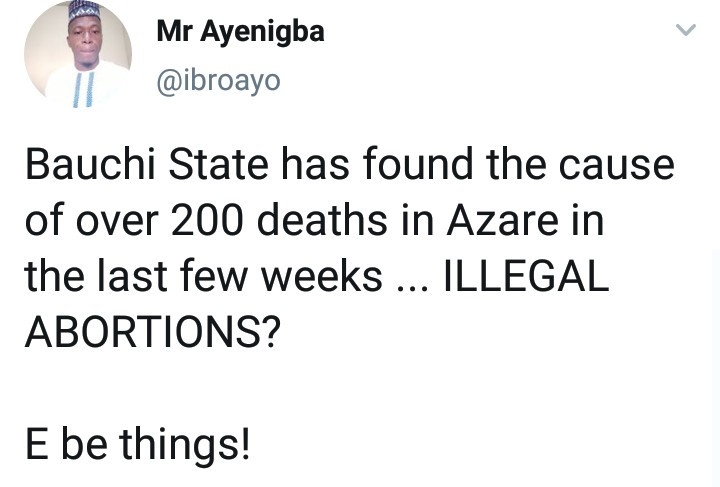 He said the lack of understanding of the importance of child spacing as well as ignorance of what to do with such pregnancies had become a major problem to family health in the state.

He emphasized the need for adequate sex education for the girl-child by parents, particularly mothers, to reduce unwanted pregnancies, thereby reducing deaths from complications.