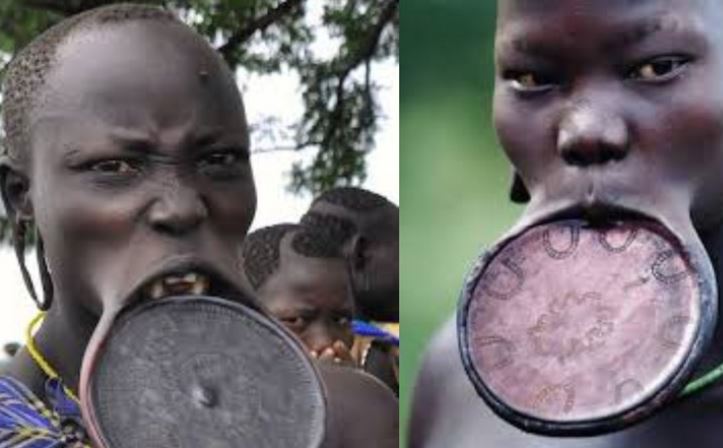 Mursi is a unique Surma tribe in Southern Sudan and the language they speak is also called Mursi. The Mursi are one of the most famous tribes from the Omo Valley in southern Ethiopia. The main reason for their popularity is the fact that their women wear large clay plates in their lower lips.

And today, this practice continues. When a Mursi girl becomes a teenager, she begins the process of lip stretching. The girl has her bottom teeth removed to make space for a lip plate, which is increased in size annually.

Teenage Mursi girls – not all but most – still get their lower lip sliced. And then a clay or wooden lip plate is inserted, that progressively gets bigger to stretch the lip.

As a result, prestige is later measured by who has the biggest lip plate. And the size of these enlarged lips with plate can substantially increase the value of the bride price.

Why guns? Well, before it was more traditional – but in recent decades, guns have a distinct advantage in tribal conflicts.

Mursi women only wear the plates for a short time because they are so heavy and uncomfortable. It is said that the clay plates were originally used to prevent capture by slave traders.

The practice was first carried out to allegedly make them look ugly when Arab merchants continually raided their villages in search of slaves.

However, that explanation has been rejected as studies reveal that the plates are a symbol or expression of social status among the Mursi people.

The supposed historical link between lip-plates and the activities of slave traders is an idea that goes back to colonial times. 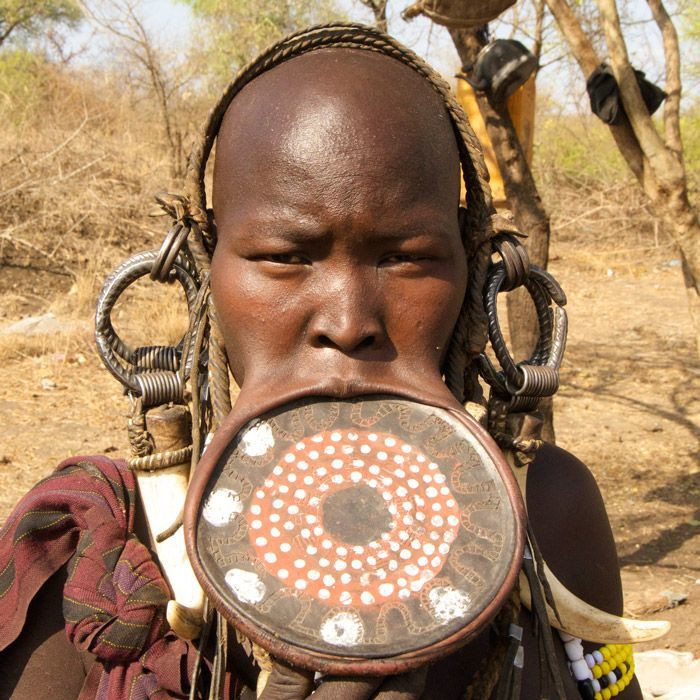 In an article in the September 1938 issue of National Geographic Magazine, C. and M. Thaw report meeting women with large plates in both their upper and lower lips near Fort Archambault, on the River Chari, about 400 miles southeast of Lake Chad, in what was then French Equatorial Africa:

“Here both the upper and lower lips of girl babies are pierced and small wooden plugs inserted into the holes.

As they grow up, these holes are gradually increased in size until they reach the dimensions of large soup plates… This form of disfigurement was begun centuries ago to discourage slave raiders, the French Administrator told us. Why it didn’t discourage the young men of the tribe, as well, we will never know. (Thaw & Thaw 1938: 357)”

The use of lip-plates is neither peculiar to Africa nor to women. Amongst the Kayapo of Brazil, for example, senior men wear ‘a saucer-like disc some six centimetres across’ in the lower lip, according to Turner, 1980: 115.

READ ALSO: Meet The Bishnoi Tribe Who Raise Animals Like Their Own Offsprings, Breastfeeds Them 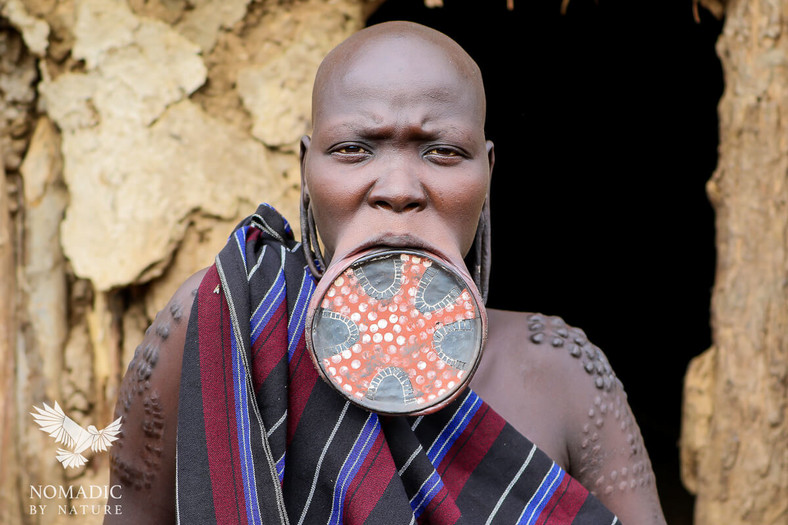 “The lip-plug, which reaches such a large size among older men, is incontestably the most striking piece of Kayapo finery. Only males have their lips pierced.

“This happens soon after birth, but at first only a string of beads with a bit of shell is placed in their backwardness by outsiders and that it will help to prolong their exclusion from the economic and social benefit of incorporation into the Ethiopian state.

In particular, it will be an obstacle to the education of girls. Here I should mention the recent activities of Protestant missionaries who, since 1989, have established themselves in the Mago Valley, where a group of Mursi had migrated a few years earlier because of drought.

The missionaries have not, as far as I know, spoken out specifically against the lip-plate. But their converts, who are at present concentrated around the mission station and may number in the region of 50 individuals, are likely to be at the forefront of efforts, coming from within the community itself, to abandon such ‘traditional’ practices and customs.”

The Mursi (or Mun as they refer to themselves) people are the most popular in Ethiopia’s Omo Valley. They are well known for their unique lip plates. Mursi are a Nilotic pastoralist ethnic group that inhabits southwestern Ethiopia.

They principally reside in the Debub Omo Zone of the Southern Nations, Nationalities, and People’s Region, close to the border with South Sudan.