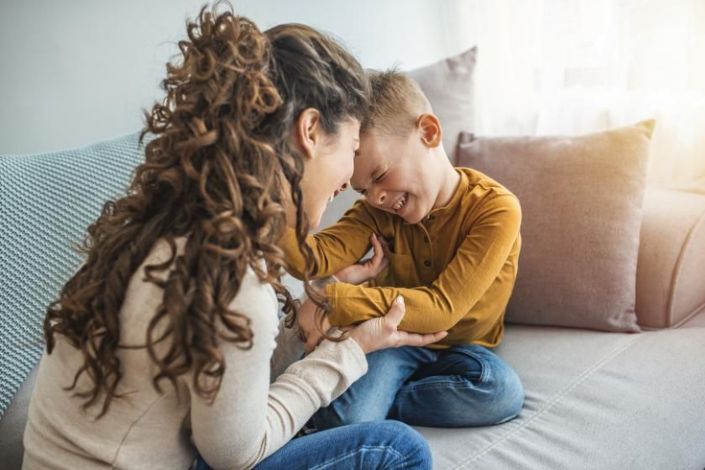 Although many parents have tickled a child at one point or another, just because a child laughs in response doesn’t mean that he or she is enjoying the tickling. Humans laugh when we are tickled as an automatic response, much like sneezing.

Tickling was even used as an actual form of torture throughout history, so as parents, it is important to understand that a child’s laughter doesn’t mean that he or she likes or wants to be tickled.

Aside from the fact that your toddler may not be able to communicate whether they enjoy being tickled, forcing a child to let you tickle them can also send a dangerous message about body autonomy.

The case against tickling is a strong one. Lawrence Cohen, Ph.D., author of the book “Playful Parenting,” said that tickling can overwhelm the nervous system and make children feel helpless and out of control.

The reflexive laughter can disguise discomfort, and even pain. It’s also a clear boundary breaker. When we tickle children without their buy-in, we’re teaching them that it’s OK to be touched and to touch others in ways they don’t like.

The worst kind of tickling is forceful and continuous, Dr. Cohen said. He adds:

“You’re not tuning in to the whole child. You’re not seeing them gasping for air. When the child is saying ‘Stop’ while laughing, the stop is ignored.”

It’s easy to see how tickling can become a form of bullying, or even abuse. It’s so common there’s a term for it: “tickle torture.”

When Caitlin Crawshaw was 8, she was playing with two brothers from her school in the basement of their grandparents’ house when they began to tickle her. The boys were about her age, the adults were upstairs. It was so forceful it hurt, she said. She remembers laughing when she wanted to cry, and feeling a sense of paralysis.

“I remember pulling my arms into my body, trying to shrink, trying to protect myself,” said Crawshaw. “And it was weird that I sort of kept laughing.”

Somehow, she said, during the tickling, the boys pulled off her shirt and pants. She eventually escaped into the bathroom, got her clothes back on and bolted from the house.

“It was horrible,” she said. “I couldn’t get the words out to tell them to stop.”

Now Crawshaw, a freelance writer and artist in Edmonton, Alberta, uses tickling to teach her 7-year-old daughter about body boundaries and consent. She tells her that her body is her own. She doesn’t make her hug extended family members.

And when her daughter asks to be tickled, which she sometimes does, Crawshaw tickles her for a few seconds at a time, paying close attention to her words and behavior.

Christine Harris, Ph.D., professor of psychology at the University of California, San Diego, who has published six papers on the subject, calls tickling “one of the most mysterious phenomena out there.”

This is partly because you can’t tickle yourself. But more relevant to children and play is the strange disconnect between a person’s behavior when being tickled and how it makes them feel. Dr. Harris said:

“Despite their face looking like they are enjoying it, if they say they don’t like it, they probably don’t like it. You’ll see them hold their arms really tight next to their bodies or pull away, which suggests that there’s something about it that’s aversive.”

Confusingly, what looks like smiles and laughter might be something else entirely. The smile is a play face, but the grimace, a submissive threat face, looks similar, and that’s what you see when playful tickling turns into something unwanted, said Alan Fridlund, Ph.D., of the University of California, Santa Barbara, who specializes in facial expressions and nonverbal communication. He said:

“At that point, the laughter is no longer the usual social laughter that accompanies play, but just a spasmodic reflex that the body uses to release tension.”

Extreme tickling, Dr. Fridlund advised, can also induce something known as “cataplexy,” a sudden, temporary loss of muscle control or paralysis. That’s probably what was happening to Crawshaw when the boys tickled her.

The involuntary laughter can be especially perplexing — for both parents and children, Dr. Cohen said. “Here’s this person who is smiling, warm and caring,” he said, “and my body’s reacting, but there’s something that’s not right about it, something that I’m not liking about it.”

Bottom line: If adults aren’t extremely attentive during a tickle game, they could miss how children are truly feeling.

Tickling as ‘a sweet, tender moment’

Not all tickling has such potential for harm. In the right setting, it can be a bonding experience, Dr. Fridlund said. But to be safe and fun, the tickle must be brief, light, playful and consensual, with frequent pauses and check-ins with the child.

When Emma Kate Tsai, an English teacher in Houston, Texas, tickles her son, Henry, this second way, using light tickling, he responds with pure joy. Henry has autism and is mostly nonverbal, so he’ll place his mother’s hands on the bottom of his feet, and then respond with a deep belly laugh. When she stops, he puts her hands right back, wanting more.

“Tickling feels like a very sweet, tender moment with him,” Tsai said.

And it can be. Children crave laughter, connection and physical play, and tickling can be a shortcut to all three.

If the child seems to be enjoying it, it’s possible that they are, said Patty Wipfler, co-author of “Listen: Five Simple Tools to Meet Your Everyday Parenting Challenges” and founder of the nonprofit parenting program Hand in Hand Parenting. But there’s a caveat — a big one. Even parents who think they’re being careful are not always the best judges of what children are feeling.

“It could be that our child’s need for their parents’ delighted look, and for that effort at sustained connection is so great, that they are in this push-and-pull situation, and we don’t know,” said Wipfler, who has consulted many parents on tickling.

As Austrew can attest, kids don’t always speak up. “It is hard as a kid to assert your needs to your parents or your relatives,” she said, “especially when they are doing something like tickling, that all of society seems to have agreed is fun for children.”

READ ALSO: Do Kids Who Grow Up With Dogs Behave Better Than Those Who Don’t? Read What New Study Finds

Some parents are reluctant to give up tickling because they’re lacking in high-intensity physical interaction with their kids, Dr. Cohen said. But there are healthier ways to achieve this, he noted.

There’s pillow fighting, wrestling, and “chase and miss,” where you chase the child, and then comically pretend to miss at the last moment, grabbing a chair as if it were the kid. One of Dr. Cohen’s favorites is “the sock game,” which can be played with two or more people.

Everyone sits on the floor in a circle, legs stretched out, wearing socks and no shoes. Then you count to three and try to pull everyone’s socks off while keeping your own socks on. He said:

“You’re looking for intensity where the child is more in charge. If one person is stronger and more confident, and they’re the ones always in control, then you’re crossing the line from healthy roughhousing to overpowering.”

But Dr. Cohen said he doesn’t want to oversell the problem:

“One time, being held down and tickled is not going to make a person have bad relationships or not have a good life.”

Then again, what’s stopping us from finding other ways to fill our children with laughter, connection and physical play that are less fraught and potentially disempowering?