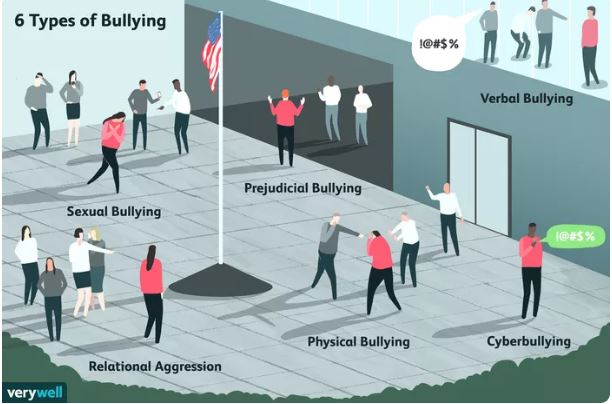 Researchers who study bullying have discovered that there is much more to bullying than meets the eye. For instance, many people once believed that bullying only consisted of physical bullying and name-calling.

However, there are actually six types of bullying, including everything from excluding and gossiping about people to making fun of their race or religion.

Not all bullies are the same. Each has a different style and uses different tactics to intimidate and control their victims. For instance, some kids that bully are very sly about how they attack their target, while others are downright mean. By being aware of not only the types of bullying but also the types of bullies your child may encounter, you will be better equipped to help your child in any situation.

Physical bullying is the most obvious form of bullying. It occurs when kids use physical actions to gain power and control over their targets. Physical bullies tend to be bigger, stronger, and more aggressive than their peers. Examples of physical bullying include kicking, hitting, punching, slapping, shoving, and other physical attacks.

Unlike other forms of bullying, physical bullying is the easiest to identify. As a result, it is most likely what people think of when they think of bullying. Additionally, it has historically received more attention from schools than other more subtle forms of bullying.

Perpetrators of verbal bullying use words, statements, and name-calling to gain power and control over a target. Typically, verbal bullies will use relentless insults to belittle, demean, and hurt another person. They choose their targets based on the way they look, act, or behave. It’s also common for verbal bullies to target kids with special needs.

Verbal bullying is often very difficult to identify because attacks almost always occur when adults aren’t around. As a result, it is often one person’s word against another’s. Additionally, many adults feel that things kids say don’t impact others significantly. As a result, they usually tell the victim of bullying to “ignore it.” But verbal bullying should be taken seriously.

Research has shown that verbal bullying and name-calling has serious consequences and can leave deep emotional scar.

Relational bullies often ostracize others from a group, spread rumors, manipulate situations, and break confidences. The goal of a relationally aggressive bully is to increase their own social standing by controlling or bullying another person.

In general, girls tend to use relational aggression more than boys, especially between fifth and eighth grades. These girls are often called mean girls or frenemies. A teen or tween on the receiving end of relational aggression is likely to be teased, insulted, ignored, excluded and intimidated.

When a tween or a teen uses the Internet, a smartphone, or other technology to harass, threaten, embarrass, or target another person, it is cyberbullying. If an adult is involved in the harassment, it is called cyber-harassment or cyberstalking.

Examples of cyberbullying include posting hurtful images, making online threats, and sending hurtful emails or texts. Because teens and tweens are always plugged in, cyberbullying is a growing issue among young people. It’s also becoming more widespread because bullies can harass their targets with much less risk of being caught.

Cyberbullies often say things that they do not have the courage to say face-to-face. Technology makes them feel anonymous, insulated, and detached from the situation. To the targets of cyberbullying, it feels invasive and never-ending. Bullies can get to them anytime and anywhere, often in the safety of their own homes. As a result, the consequences of cyberbullying are significant.

In extreme cases, sexual bullying opens the door to sexual assault. Girls are often the targets of sexual bullying both by boys and by other girls. Boys might touch them inappropriately, make crude comments about their bodies, or proposition them. Girls might call other girls names like “slut” or “tramp,” make insulting comments about their appearance or body, and engage in slut-shaming.

Sexting also can lead to sexual bullying. If a girl sends a photo of herself to a boyfriend, he may share that photo widely if they break up. She becomes the target of sexual bullying because people make fun of her body, call her crude names, and make vulgar comments about her. Some boys may even see this as an open invitation to proposition her or sexually assault her.

Oftentimes, this type of bullying is severe and can open the door to hate crimes. Any time a child is bullied for his sexual orientation, race, or religion, it should be reported.

SEE ALSO: How To Deal With A Bullying Spouse

Bullies have different styles, personalities, goals, and behaviors. Their motivations for and methods of bullying are all different. And not all bullies will fit neatly into a category. Some bullies will fall into several categories and some may appear to be in a category all their own.

Bully-victims often rise up after being bullied. They bully others weaker than them because they, too, have been bullied. Their goal usually is to regain a sense of power and control in their lives.

This type of bully is very common. In fact, a large number of kids who bully others have been bullied themselves by peers. Their bullying is a way of retaliating for the pain they are feeling. Other times the bully-victim comes from a home with domestic violence or suffers abuse from an older sibling. In these cases, bullying is a learned behavior.

Most bully-victims are loners or fall at the bottom of the social ladder at school. This fact adds to the sense of powerlessness and anger they feel. Consequently, they often appear hostile, which can cause them to be unpopular. This, in turn, perpetuates the cycle of the bully victim.

Popular bullies have big egos. They are confident and condescending. They usually have a group of followers and may feel like they rule the school. These bullies have a sense of entitlement that can stem from their popularity, size, upbringing, or socioeconomic status. They thrive on the physical power and control they have over their victims and may boast about their bullying.

Popular boys most often bully others through physical acts like pushing someone around, taking their books, or pinning them against lockers. Popular girls are more likely to use relational aggression. They spread rumors, are manipulative, and often exclude others.

Popular bullies are sometimes the school’s star athlete or perceived school leader. They thrive on the attention and power they get from bullying. Peers often tolerate this type of bully because they would rather be accepted than bullied.

The relational bully is usually a somewhat-popular student who enjoys deciding who is accepted at school and who isn’t. Excluding, isolating, and ostracizing others are the most common weapons used by this type of bully. Most often, the relational bully will use only verbal or emotional bullying to maintain control. Many times, mean girls are relational bullies.

Relational bullies also maintain their power by using rumors, gossip, labels, and name-calling. Typically, they target others because they are jealous or feel they are socially unacceptable. Maintaining popularity is the key reason for relational aggression. The relational bully will do anything to be part of the “in crowd.”

The serial bully is another type of bully often found in popular circles. These bullies are systematic, controlled, and calculated in their approach. Parents, teachers, and administrators may have no idea what a serial bully is capable of.

This type of bully appears sweet, charming, and charismatic to authority figures. But, they can be cold and calculating and tend to inflict emotional pain on their victims over long periods of time. Sometimes serial bullies will use physical bullying, but only if they can be sure they won’t be caught.

Serial bullies are skilled manipulators and liars and are usually fake friends. Their sweet and nice persona is just another way to manipulate situations to their liking.

They are able to twist facts and situations to make themselves look innocent or to get out of trouble when confronted. In fact, serial bullies are often so skilled at deception that their victims often are afraid to speak up, convinced that no one will ever believe them.

ALSO SEE: Grieving Parents Share How Constant Bullying Took the Life of Their 10-Year-Old Daughter: ‘We have to stop it within our kids’ | WATCH

Bullies in this category are part of a group and have a pack mentality when they are together. They tend to bully as a group but behave much differently when they are alone—even if they are alone with the victim. Usually, group bullies are cliques that imitate the leader of the group and just follow along.

Because kids feel insulated when they are in a group, they often feel free to say and do things they wouldn’t do otherwise. They also feel less responsible for their actions because “everyone is doing it.” This is a very dangerous type of bullying because things quickly can escalate out of control.

Indifferent bullies are often unable to feel empathy. As a result, they can often appear cold, unfeeling, and detached and have very little, if any, remorse for what they do to others. These types of bullies, although less common than the other types of bullies, are often the most dangerous.

Indifferent bullies are bullying for the sheer enjoyment of seeing another person suffer. They are not deterred by disciplinary actions. Additionally, indifferent bullies are often vicious and have deep psychological problems that need to be addressed by a professional. Traditional bullying intervention does not usually bring about change in their bullying.