There was confusion last Saturday at the Great Salvation Christian Centre, aka Father’s Church, on Ako Aro Road, in the Ifako-Ijaiye area of Lagos State, after a man, Iberemu Osadebe, disrupted an ongoing wedding in the church.

He claimed that the bride, Gloria, was his wife. PUNCH Metro gathered that Osadebe had a traditional wedding with Gloria after they had a son together. He, however, became sick for about five years, during which time he sold most of his property to seek a cure.

The Imo State indigene was said to have later travelled to his hometown in Isiala Mbano, where he continued the treatment. According to the publication, Osadebe was on the sick bed when he received information that his wife of 20 years would be getting married to another man on Saturday, August 29, 2020.

The 43-year-old was said to have developed high blood pressure, which affected his speech. He returned to Lagos on Friday, a day to the wedding, and reported his plan to disrupt the wedding at the Agbado Police Station.

Upon arriving in the church around 11am, some of the church leaders, who recognised him, appealed to him to let the matter go, which he rejected. Some members of the National Union of Road Transport Workers, who were said to be colleagues of the new groom, identified as Henry, were also invited to mediate.

A Punch correspondent, who witnessed the occasion, noted that the church adjusted the wedding programme after sensing the building tension. Fervent prayers were offered against intruders and plots to interrupt the wedding.

The church’s pastor was about to join the new couple when Osadebe’s family members marched to the pulpit and revealed that the woman was already married and could not be joined in holy wedlock.

Now, Osadebe has told his part of the story to PUNCH Metro amid stutters, revealing that he was shocked that his wife betrayed him.

I was in a relationship with my wife for 20 years; we had a child together in 2011. My mother objected to our union because she is not from my tribe, but I said I loved her.

When my mother died and I wanted to travel for the burial, my wife said she would not follow us, because it is a taboo in her tradition for a woman, whose bride price has not been paid, to go on such a journey. She also refused to release my son.

When I got to the village, the elders were angry that I did not come with my wife and son as my mother’s first child. They fined me N40,000. After that disgrace, I vowed to pay her bride price.

They demanded groundnut oil, tubers of yam, among other things, which we valued at N60,000 and paid.

The former bus driver said when he took ill, he traveled to his hometown for treatment, adding that his wife refused to follow him. He alleged that while he was sick, his wife called and lamented that she and their son were starving, adding that he instructed that his bus be sold and the proceeds given to Gloria to start a business and pay the son’s school fees.

Osadebe said he was shocked when his relatives called to inform him that his wife was remarrying. He noted that though he still loved the woman, he had decided to let her go, but not without the release of his son and refund of the bride price.

A family member of the husband, Richard Ikere, claimed that he was part of the delegation that paid Gloria’s bride price in her hometown in Uromi, Esan North-East area of Edo State.

Ikere alleged that Gloria started seeing the new man while her husband was still in Lagos.

“When I heard that she was getting remarried, I called my brother in the village and asked if he was aware.

He said no, but that while he was receiving treatment in March 2020, someone brought a letter to him and he kept it.

“He said when he later checked, he found out that it was a divorce letter. How can a court dissolve a marriage without hearing from the man?

That was when I asked him to come down to let people know that he is still her husband.

And if she wants to leave, she should release his son to him.” 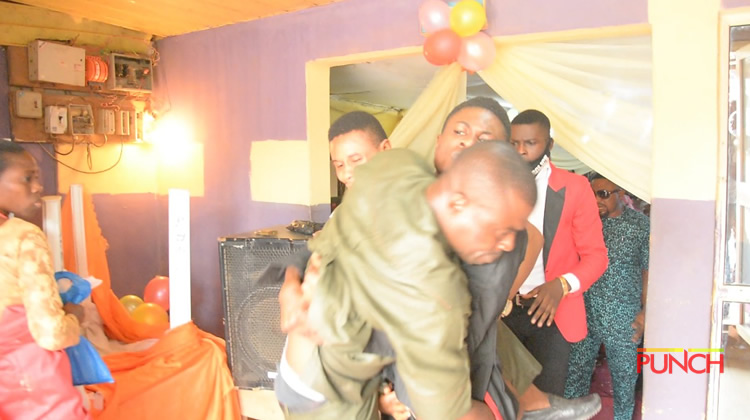