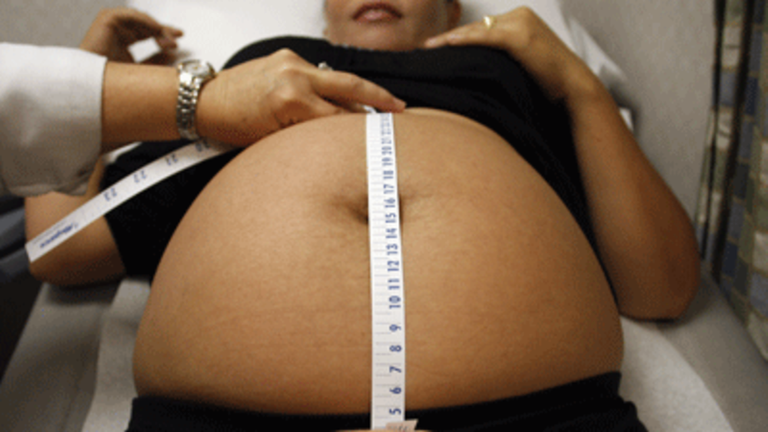 A mother’s obesity in pregnancy can affect her child’s development years down the road, according to researchers who found lagging motor skills in preschoolers and lower IQ in middle childhood for boys whose mothers were severely overweight while pregnant. At age 7, the boys whose mothers were overweight or obese in pregnancy had scores 5 or more points lower on full-scale IQ tests. No effect was found in the girls.

The researchers studied 368 mothers and their children, all from similar economic circumstances and neighborhoods, during pregnancy and when the children were 3 and 7 years of age. At age 3, the researchers measured the children’s motor skills and found that maternal obesity during pregnancy was strongly associated with lower motor skills in boys.

At age 7, they again measured the children and found that the boys whose mothers were overweight or obese in pregnancy had scored 5 or more points lower on full-scale IQ tests, compared to boys whose mothers had been at a normal weight. No effect was found in the girls.

“What’s striking is, even using different age-appropriate developmental assessments, we found these associations in both early and middle childhood, meaning these effects persist over time,”

“These findings aren’t meant to shame or scare anyone. We are just beginning to understand some of these interactions between mothers’ weight and the health of their babies.”

It is not altogether clear why obesity in pregnancy would affect a child later, though previous research has found links between a mother’s diet and cognitive development, such as higher IQ scores in kids whose mothers have more of certain fatty acids found in fish.

Dietary and behavioral differences may be driving factors, or fetal development may be affected by some of the things that tend to happen in the bodies of people with a lot of extra weight, such as inflammation, metabolic stress, hormonal disruptions and high amounts of insulin and glucose.

The researchers controlled for several factors in their analysis, including race and ethnicity, marital status, the mother’s education and IQ, as well as whether the children were born prematurely or exposed to environmental toxic chemicals like air pollution. What the pregnant mothers ate or whether they breastfed were not included in the analysis.

The team also examined and accounted for the nurturing environment in a child’s home, looking at how parents interacted with their children and if the child was provided with books and toys. A nurturing home environment was found to lessen the negative effects of obesity.

According to Widen and senior author Andrew Rundle, DrPH, associate professor of Epidemiology at Columbia Mailman School, while the results showed that the effect on IQ was smaller in nurturing home environments, it was still there.

This is not the first study to find that boys appear to be more vulnerable in utero. Earlier research found lower performance IQ in boys but not girls whose mothers were exposed to lead, and a 2019 study suggested boys whose moms had fluoride in pregnancy scored lower on an IQ assessment.

Because childhood IQ is a predictor of education level, socio-economic status and professional success later in life, researchers say there is potential for impacts to last into adulthood.

The research team advised women who are obese or overweight when they become pregnant to eat a well-balanced diet that is rich in fruits and vegetables, take a prenatal vitamin, stay active and make sure to get enough fatty acids such as the kind found in fish oil. Giving children a nurturing home environment also matters, as does seeing a doctor regularly, including during pregnancy to discuss weight gain. Working with your doctor and talking about what is appropriate for your circumstances are recommended.