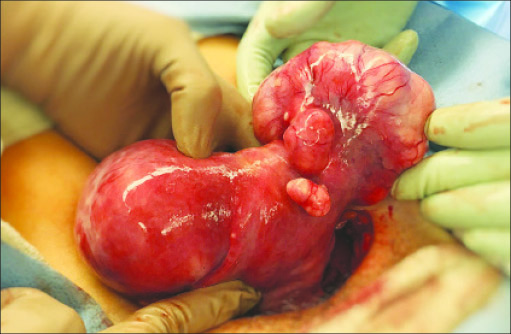 A consultant Obstetrician and Gynaecologist, Dr. Tunde Oyeyinka, says women diagnosed with fibroid stand the chance of conceiving three to six months after surgery. Speaking with PUNCH Healthwise, Oyeyinka, a fellow of the West African College of Surgeons, said as long as the surgery is carried out by a certified heath expert, there is absolutely no reason for fertility not to be enhanced after the medical procedure.

He, however, warned against seeking alternative sources for fibroid management, noting that such a step is capable of causing grievous harm to the womb.

READ ALSO: Fibroids and Painful Sex, OBGYN Abosede Lewu Charges Women On What To Do

“Fibroid surgery is supposed to help women improve their fertility and increase chances of conception.

“Most people erroneously believe that once a woman that is yet to have a child undergoes fibroid operation, the chance of conception becomes limited.

“However, what most specialists like me would say is that we don’t entertain such fear.

“We are aware that many general practitioners carry out fibroid surgery.

“What I would advise is for women to go to certified gynecologists, who are qualified to carry out such a procedure and are able to subsequently give appropriate follow-up treatments to help ensure that pregnancy occurs.”

Oyeyinka described fibroid as abnormal growths of the muscles of the womb of which the exact cause is unknown.

He noted that the predisposing risk factors include early onset of puberty, a family history of fibroids, and obesity, among others.

The gynaecologist pointed out that most women with fibroid have additional causes of delayed conception that could include low sperm count on the part of the husband, or the woman having fibroid and hormonal imbalance at the same time.

He, however, said the appropriate thing expected of a certified expert before booking a patient with fibroid for surgery would be to carry out all necessary investigations that have to do with ovulation and sperm production.

“This is because the womb is just a sac where the baby comes to grow. The tube is where the pregnancy would occur and the ovaries are where the eggs would come from.

“If those two are not working well or if the sperm is not able to fertilize the egg, delayed conception could be blamed on the fibroid surgery at the end of the day,”

The expert noted that once an expert has managed a woman that is yet to conceive for three years, and find no other underlying issues aside from the fibroid, surgery should be initiated immediately.

“As long as there is no concomitant problem, and the husband’s sperm is certified okay and x-ray showed that the inside of the womb and the tubes are perfect, then the best thing is for the patient to undergo surgery and see what happens next.

“Even if a woman wants to go for In vitro fertilisation (IVF), the fibroid still needs to be removed.

“After the surgery, within three to six months, you can start aiming to get pregnant either naturally or through IVF.”

IVF, according to Mayo Clinic is a complex series of procedures used to help with fertility or prevent genetic problems and assist with the conception of a child.

It noted that IVF is the most effective form of assisted reproductive technology, adding that the procedure can be done using the woman’s eggs and the partner’s sperm.

“Or IVF may involve eggs, sperm or embryos from a known or anonymous donor. In some cases, a gestational carrier — a woman who has an embryo implanted

“During IVF , mature eggs are collected (retrieved) from ovaries and fertilized by sperm in a lab.

“Then the fertilized egg (embryo) or eggs (embryos) are transferred to a uterus.

“One full cycle of IVF takes about three weeks. Sometimes these steps are split into different parts and the process can take longer,”

Oyeyinka bemoaned the fact that women with fibroid delay having it removed on time because they are seeking for alternative means of management, adding

“Within that time, a fibroid that can easily be removed would have grown so big, causing other problems to where they are growing.

“At the end of the day, when you now have to operate, the risk of adhesions is now made worse.

“It could be intrauterine adhesions, which are formed inside the womb when scar tissue builds up between the inner walls of the uterus causing the walls to bind together, or adhesions formed around the tubes.”

He noted that such medical issues barely occur when fibroid is surgically removed at a moderate size.

“Issues arise when a woman allows her fibroid to grow to six months or seven months pregnancy size.

“And this growth takes quite some years. Some people get diagnosed for five years or more and would have been having symptoms like heavy bleeding and pain.

“Most finally agree to surgery when things get to a head. And such could lower their chances of getting pregnant,”