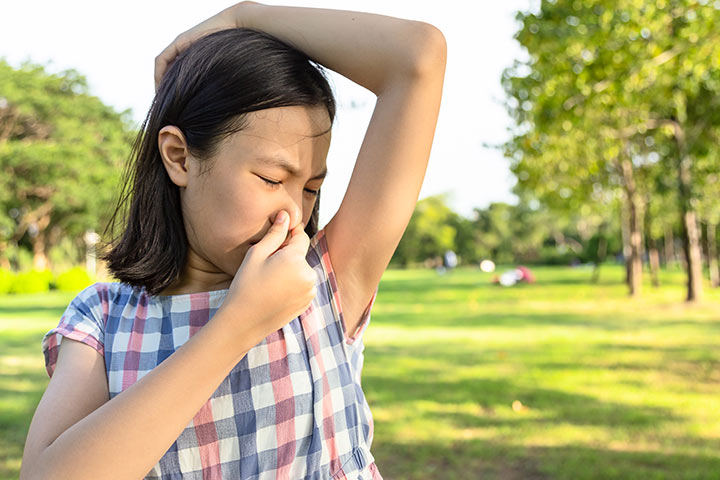 There’s nothing like the smell of body odor to remind parents their little boy or girl is growing up and approaching puberty.

When kids start to smell differently, remember that it’s a normal part of growing up and that simple changes to their hygiene routine should keep kids smelling fresh. So parents and kids shouldn’t be alarmed by normal body odor.

This week, HuffPost Parents talked about kids and body odor, aka BO, and how parents should proceed when children start experiencing signs of puberty, often way sooner than we’d expected.

As one mom said: “I’ve been concerned about my 7-year-old having BO and thought I was the only one!”

She wants to know how to talk to her young daughter about what’s going on without teaching her there’s something wrong with her body.

“I work pretty hard to give gentle but firm reminders about deodorant use,” echoed a mother of a middle-schooler. “I think not smelling like BO is common courtesy to those around you. I also think it’s a good habit to get into now, kind of like brushing your teeth. My husband thinks I’m going to give my daughter a complex.”

So who’s right? And how can parents handle all of this with their kids in a helpful way?

Here’s what experts had to say:

First, know that there are no hard-and-fast rules concerning when kids start experiencing signs of puberty.

“It’s a hard question to answer, because every kid is different. And everybody’s trajectory through puberty is different,” said Dr. Elizabeth Alderman, chief of the division of adolescent medicine research with The Children’s Hospital at Montefiore in New York.

In general, puberty starts between the ages of 8 and 13 for girls, and 9 and 14 for boys. But some kids start experiencing signs (like budding breasts, body odor, acne, and developing pubic and underarm hair) before those ages. The technical term for that is “precocious puberty.”

If you’re at all worried your child is too young to be entering puberty, reach out to their pediatrician who may want to rule out underlying health concerns, like issues with the pituitary gland.

Some evidence has emerged that puberty is starting earlier than it once did, particularly in girls, but the reasons for that are not clear. While some parents and health care providers are concerned about the role certain chemicals may play — and research is examining the possible role that exposures to some consumer products as well as other environmental factors, could have — there remains no firm evidence at this point.

But parents shouldn’t just reach out because of possible underlying causes; Alderman urges caregivers to feel empowered to reach out to a pediatric health care provider (like a pediatrician or nurse practitioner) simply because those experts can be really valuable assets as you guide your child through adolescence. They know stuff! And they know how to talk about that stuff with kids!

That doesn’t mean you’re off the hook. Parents should absolutely be talking to their children about puberty, and probably sooner than you think. At a minimum, you want to talk to your child the minute you notice any bodily changes, Alderman said. Some parents and schools think of age 10 as a good benchmark, but again, for many kids puberty starts well before that.

To start, keep it simple and give your child opportunities to tell you what they think they know. Maybe try something like: “It seems to be me like your body is changing,” Alderman suggested.

Then follow up with: “What do you notice?” Make it clear you’re open to hearing more about what they’re noticing and experiencing.

If your kiddo is too embarrassed to open up, you may have to try a different tactic. Tell them: “This is going to be a one-sided conversation, and you may not want to say anything. That’s OK. This is what’s going on.”

Reassure them you also went through changes when you were younger, she said. If you wear deodorant or do other things to keep your own body odor in check, tell them.

Above all, keep the conversation positive. Reassure your child: “We expect this!” Alderman said. Basically, you want to make it clear that all bodies change. That’s great — and expected!

Be sure to put a bit of thought into how you’d like your child to deal with body odor. Do you expect them to shower? How often? Wear deodorant? When? What type?

Allison Moss, founder and CEO of type: A Deodorant, an aluminum-free brand, told HuffPost she is “consistently hearing from parents” whose kids have body odor much earlier than they expected (like ages 7, 8 and 9).

She cautions against sending the message that sweat is bad. Instead, consider framing it more as: “How do we work with our bodies to keep ourselves fresh?” she suggested.

But be consistent. You might have to remind your kiddo about hygiene and deodorant a lot, particularly if they’re on the younger side.

“A lot of the habits we develop as kids … last really well into our adult lives,” Moss said.

All that said, if your child is really fighting wearing deodorant, or if they’re just really forgetful and it is becoming a huge battle, tread carefully: “You don’t want to get in a big war about this,” Alderman said.

These conversations are important. Parents should aim to be their children’s first source of information on puberty and body changes because those early conversations have the most impact, Alderman said. And we want to make sure our children are getting actual facts, framed in a positive way.

It doesn’t have to all come together in one magical 10-minute talk. As the AAP says: “Information can be shared in smaller conversations, opening the door for ongoing communication.”

READ ALSO: PARENTING! Mom Shares The Smart Way She Is Teaching Her Kids About Consent & Boundaries

Ultimately, it’s about building a good framework early-on, so that when they start grappling with even more intense issues — Like sex! Consent! STIs! And on and on — they’ll be in the practice of coming directly to you.