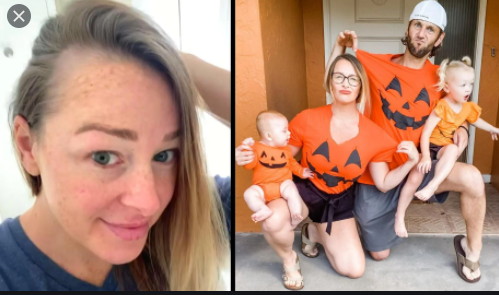 One of the most common, and yet still one of the most surprising, postpartum occurrences for new moms is hair loss. I welcomed my son in February. Two to three months later, I noticed my hair falling each time I tried to comb it. I was scared at first that I had to use scissors to trim it low.

I then went online to google about it and then found that it is a normal occurrence that most moms experience postpartum.

For supermodel and first time mom, Ashley Graham four months after welcoming her son, her whole hairline fell out. Graham told the New York Times in October, nine months after giving birth to her first child, a son:

“Four months postpartum my whole hairline fell out, and now I have a bunch of cowlicks from all the baby hair growing in.

“It can be so heartbreaking when you’re looking at your child, and he’s so healthy and adorable, and then you look at yourself, and you’re, like, what is happening to me? These are things women go through!” 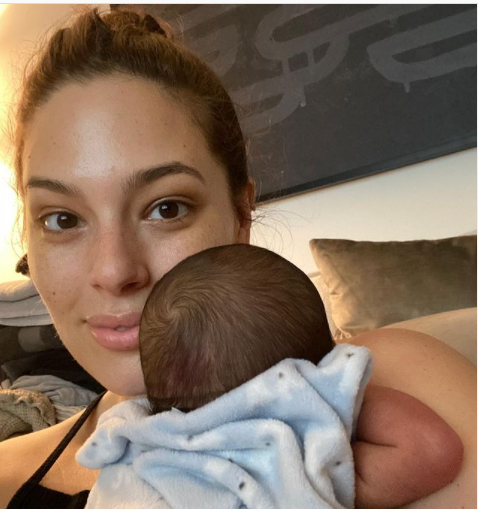 Another new mom, “Married at First Sight” star Jamie Otis, opened up about her postpartum hair loss in an Instagram post last month. Otis shared that her postpartum experience has “rocked [her] to the core” and has affected her physically, mentally and emotionally.

“Here I am completely raw & bare — & balding. I have no makeup, no filter & you can totally see my BALD spots.

Postpartum has rocked me to my core, affecting me physically, mentally, & emotionally. I feel like I’m a different person than I was before I had my son.

I’ve had days where I’ve been bed-ridden, too depressed to get up. My daughter says, ‘mommy woke up!’ when I crawl out of bed in the afternoon.?⁣”

Otis and and her hubby tied the knot on the first season of Married at First Sight in 2014. Though they are now parents to 5-month-old Hendrix and 3-year-old daughter Henley, she’s suffered multiple miscarriages over the years. Otis said that she hasn’t been open about her postpartum struggles because she doesn’t want to seem ungrateful.
⁣
“I haven’t talked too much about it bc if I mention it I fear people will think I’m just looking for pity or worse, that I’m not thankful for the amazing babies I have,”

“But that’s the thing about depression — you can’t talk yourself out of it, you can’t put makeup on and instantly feel better, you can’t even spray dry shampoo on your bald spots and expect the sadness that you buried to stay down.??‍♀️?⁣,” 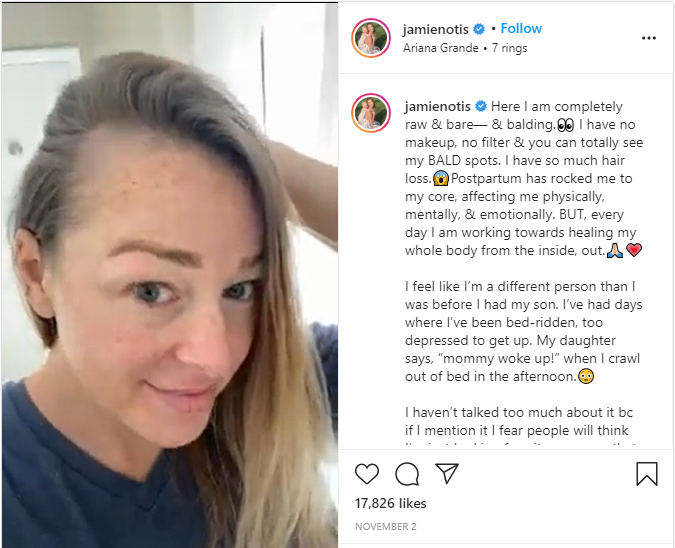 “It’s weird because it’s not necessarily my appearance or my job or my marriage or *anything that I can pinpoint* as to why I’m ‘depressed.’ I am so blessed in every way in life!⁣ So why do I feel so lethargic, overwhelmed, & stressed?!?⁣ I don’t know.??‍♀️⁣.”

Otis shared that she was now working to heal her body inside and out, and also noted that when it comes to her hair loss, “we are more than our appearance.”
⁣
“The only reason I am sharing all of this is because I don’t want to be a fraud and post this video where I seem completely happy with my lack of hair and makeup free face.?,”

“I don’t want you to think I’ve got all my sh!t together all the time bc there are definitely days when I don’t. ⁣But today I feel good! I’m not letting the hair loss get to me. I’m embracing my freckles & blemishes. Tomorrow, who knows! ??‍♀️?⁣ The point is, body positivity & body acceptance is not a ‘flip the switch and it’s turned on’ kinda thing. It’s an on-going personal journey.⁣”

While seeing their hair fall out in the months after giving birth can be alarming or traumatic for women, it is normal and in most cases, temporary, according to Dr. Jennifer Ashton, ABC News chief medical correspondent and a board-certified OBGYN.

“It’s not going to be the same for every women but it’s absolutely the norm,” Ashton said of hair loss. “It’s common, but that doesn’t make it any less upsetting for new moms.”

The exact reason why this normal process is disrupted by pregnancy is not known, but one theory is that it has to do with a drop in estrogen levels after giving birth, according to Ashton.

2. The peak of postpartum hair loss for most women is usually three to six months after giving birth, said Ashton, also noting that the good news for women is the hair loss is typically just temporary.

“By about one year postpartum, so when you’re celebrating your baby’s first birthday, most moms are back to their baseline,” she said.

3. A woman’s hair type and color pre-pregnancy can affect how much hair they shed in the postpartum stage, according to Ashton.

Women with finer hair and women with hair of lighter colors may notice hair loss much more than women with darker or thicker hair, she explained.

4. Women should talk to their doctor during pregnancy about postpartum hair loss.

“I don’t think many obstetricians or midwives talk about this because they’ve usually stopped seeing the woman as frequently by the time this hair loss occurs,” said Ashton.

“I don’t think there’s enough in advance counseling and education going on and it’s really only in hindsight that most moms learn by personal experience that this is so common,” she said.

5. Going easy on hair styling during pregnancy and after can help ease postpartum hair loss, according to Ashton.

She recommends women take it easy on blow drying, styling and even shampooing their hair, including limiting the use of hair bands and hair clips and trying to avoid using weaves and extensions in the hair.

“The more gentle you can be, meaning the less you can do to your hair, the less traction on those hair follicles and strands, the better,” she said.

Women’s continued use of prenatal vitamins can also help with postpartum hair loss, according to Ashton, who noted, “There are a lot of micronutrients in prenatal vitamins that happen to also be great for hair, skin and nails.”

6. Women who lose major clumps of hair may want to see a doctor, explained Ashton.

“Most dermatologists will recommend to check for excessive hair loss, that you just lightly grab your hair, pull it away and see what comes out,” she said. “If you are losing clumps of hair at a time and it’s literally leaving bald patches on your head, then you definitely want to get that worked up from a medical standpoint. Start with your general physician.”

One of the most common areas for women to see postpartum hair loss or breakage is at the front of their foreheads, and that’s completely normal, according to Ashton.

SEE ALSO: New Study Finds That Being A Mum Can Be Bad For Your Mental Health

7. Remember to be patient with and kind to yourself during the postpartum period, recommended Ashton.

“This is an incredibly common phenomenon. It is almost always temporary. That doesn’t make it any less upsetting,” she said. “You have every right to be bothered by it.”

“But to take a big picture view, remember what you’ve just done. You’ve just incubated and grown a human and delivered a human. Be patient with yourself,” Ashton added.

“Cut yourself some slack and remember as tied in to our hair as many of us women are, that is not what makes you a beautiful woman. It’s all inside. This is just window dressing and it will get better.”