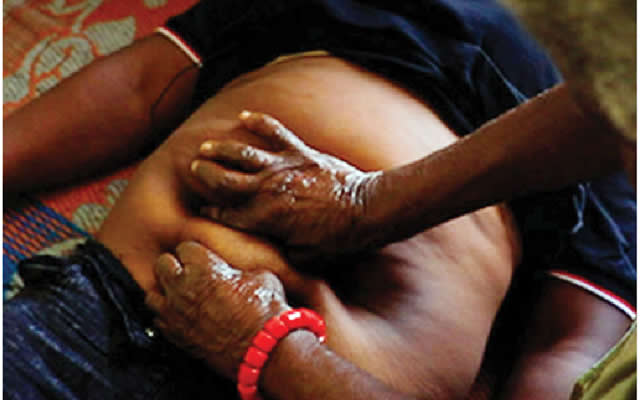 Experts: Great Foods To Eat Before And After Taking COVID-19 Vaccination

A Consultant Gynaecologist and Obstetrician at the Bridge Clinic Fertility Centre has warned women of childbearing age to stop the practice of womb massage and ‘reset’ by unskilled Traditional Birth Attendants.

The practice, according to Dr. Morenikeji Olaniyi, can lead to recurrent miscarriage and uterus rupture. The expert warned that the practice is not medically recognised, and that it can displace the womb from its natural positioning, making conception ultimately difficult.

Olaniyi spoke against the backdrop of a study titled, ‘Abdominal massage: Another cause of maternal mortality,’ published by the National Library of Science.

The study noted that ignorance, illiteracy and poverty had sustained the practice, while underdevelopment, inaccessible and ill-equipped medical facilities have made the traditional practice to flourish, even among educated people.

“The time to stop this form of avoidable losses is now. This can be achieved through public health approach, mass literacy, even distribution of affordable healthcare services, improved social services and transportation, robust economy and a grass root involvement of rural programmes aimed at eradicating harmful traditional practice,”

Speaking to PUNCH HealthWise, Dr. Olaniyi explained that the practice, which is mostly carried out by women from Ijaw tribe in the Niger-Delta region, involves what she described as “crude method” that include pounding of mortar on the stomach, sitting on the client’s stomach and pushing of the womb.

The physician warned that the efforts sometimes lead to the collapse of some structures in a woman’s anatomy.

“The massage and other strong handling of the womb can change the inner structure of the womb, which has naturally been made to stretch to allow a baby to grow as pregnancy progresses.

“They change those initials and by the time the woman becomes pregnant, there will be recurrent miscarriages, because normal angulation of the womb may have been lost.

“The womb may no longer be in the right position or right place to be able to support continuous growth by the time the baby starts expanding in the womb.

“Sometimes, the womb will rupture during labour or while a woman is still pregnant, because the womb might already be weak in some areas.”

According to Healthline, uterine rupture occurs when a weakened spot on the uterine wall tears due to the strain put on it during labour and delivery. The rupture can result in uncontrolled bleeding into the abdomen, or, rarely, lead to part of the placenta or baby entering into the abdomen.

“It can be life-threatening, if it’s not treated quickly,” the health portal warns.

Olaniyi, a fertility expert, further revealed that any of the practices could cause uterine prolapse, due to the pressure applied during massage. She added:

“This is pushing the womb from its former position and this leads to prolapse. There is nothing, medically, supporting this traditional practice. They believe in it but we don’t.”

“The practices are absurd. How can you put mortar on a woman’s stomach and pound?

“When these women come to the clinic, we hear several strange stories. Some will reveal that about two to three people sat on their stomach. Thank God some get to know it endangers their lives and are even lucky to share their personal experiences.”

Experts warn that uterine prolapse can displace part of the vaginal lining, causing it to protrude outside the body, such that vaginal tissue rubs against clothing, leading to vaginal sores, which can become infected.

“It is better to be cautious of where we visit as women to get fertility treatment. Women should desist from going to places where their problems get compounded,”