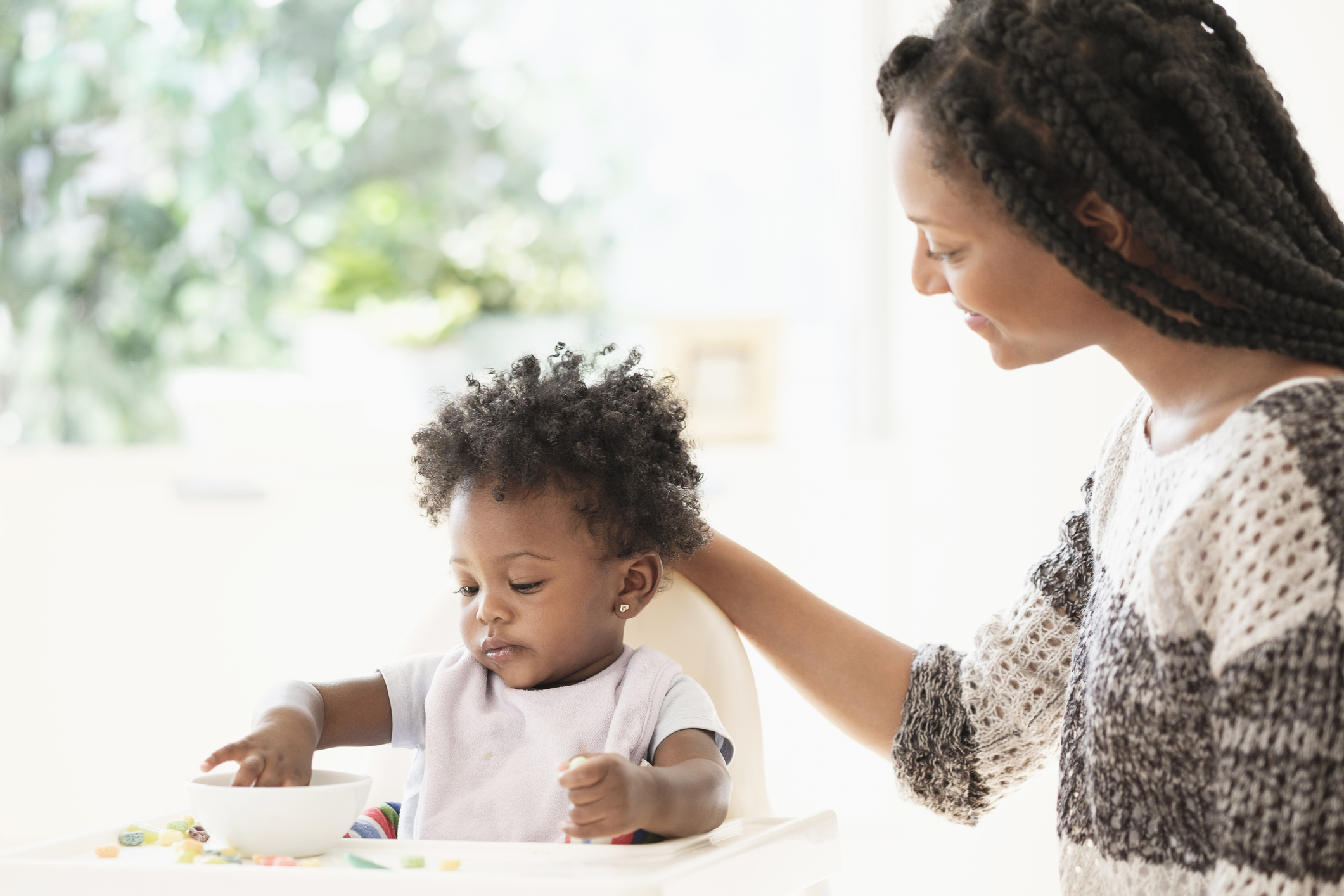 #TheArtistAndHisMuse2021: Celebrity Stylist And Mum, Toyin Lawani And Her Fiancé, Segun Wealth Are Counting Down To Forever!

As we know breastfeeding creates a bond between a child and the mother, it’s an activity that must stop at a stage and that’s when weaning comes in.

However, to wean a child may be difficult and differs from child to child. If breastfeeding is exhausting to a mother, weaning could be more strenuous because of the extra work of attending to the child’s other needs.

A first-time mum, Mrs Abigail Sonuga, told PUNCH that weaning can be a bit demanding especially for a woman who is nursing a baby for the first time. She said,

“Being a first-time mum, weaning a baby is something I didn’t have a prior knowledge of. It wasn’t only demanding for my child, it was for me as the mother too. What I did was that I weaned my child slowly by decreasing the number of times I breastfeed her and I complemented it with other nutritious food.

He was already taking solid food before then, so I just added a variety of mashed soft solids that the baby finds tasty. Even when this is done, the baby will look for breast milk to top up and fall asleep being used to it. The baby is used to it and we are all fine.’’

The woman said she continued the process for a week and gradually got somebody to always put him to sleep. She added,

“If you are co-sleeping with your baby and want to wean him or her, continue that as you can only do night-time feeding and wean the baby gradually during the day by giving alternate foods.

Night-time feeding alone is pretty sufficient during the weaning phase. Then eventually, you let someone else put them to sleep. After a while, they would forget about breast milk. That was what I did in my case.”

Another mother, Mrs Lolade Adeoni, was of the belief that the milk secretion of the mother was a mind thing and the most important thing was to first ensure that the child got off breast milk. She said,

“If you are creating thoughts of weaning in your mind, that will influence milk production and start decreasing your supply, coupled with baby’s reduction in feeding sessions.

When you are ready to wean your child, three times a day is a good way to start. Finally drop the night-time feeding too. By this time, your supply will also be diminished and the baby will lose interest. This was exactly what I did and it worked for me.”

Adeoni added that since breast milk was a major form of bonding between mother and child, if a mother desired to wean her child, it was vital that the mother substituted the bonding with physical attention to keep the connection going. She added,

“I continued to give physical affection to each of my babies I was to wean. It was difficult but a necessary transition for them. Mothers should enjoy the phase as long as it lasts.

Breastfeeding pumps a lot of happiness hormones called endorphins that give one a sense of calm and overall well-being. I started with some physical activity to fight the blues that may or may not accompany weaning and this helped me to keep my body and mind intact.’’

SEE ALSO: 12 Tips On Weaning Your Baby From the Breast

She however noted that depending on one’s situation, mothers should find the right balance between them and their babies as according to her, there’s no right or wrong way to wean.

Adeoni stated, “It is an intensely personal journey.’’

In her contribution, a mother of two, Mrs Ekanem Obot, said she breastfed her  two boys for 18 and 22 months respectively. She said,

“When I wanted to wean my children, I started to introduce them to some things that they could eat as alternatives. I prepared myself well; I usually ensured that I had enough snacks in the house. The elder loved any snacks and juice. The second child loved to have chocolate and milk.

Then I mostly pumped the breast milk into their bottles and I would give it to them gradually. They would alternate with their favourite junk food and bit by bit, they got weaned. I would advise mothers to take it step after step. They should not over push themselves.”

Though there is no size-fits-all approach, mothers seem to agree that weaning a child should be done gradually and not suddenly.

For a mother of two, Mrs Tosin Chuks, a mother has to first reduce the frequency of feeding her baby before suddenly cutting him or her off breast milk. Chuks said.

“In my own experience, as my child attained toddlerhood, the frequency and duration of breastfeeding sessions reduced, and my milk production likewise went down.

We didn’t quite make it to two years, but the termination of breastfeeding was gradual and it was frankly a relief once the process ended.

“Slowly weaning a child is my best advice. I nursed my two sons until they were between 14 and 15 months old. I started spacing out feedings while giving them more food to eat through the day. I gave them breast milk thrice a day when I began to wean them. I fed them in the morning when they woke up and when I put them down for their nap and then at night.

Chuks added that weaning slowly was the best way to continue having a bond with one’s child and also helping one’s body ease back to its no lactating state. The woman stated,

“Cold turkey weaning is harsh on your baby emotionally and you can even hurt your breast especially your ducts.’’

An India-based pediatrician, Jayshri Narasimhan, said that weaning one’s baby was a phenomenon where the baby’s slowly introduced to outside foods along with mother’s breast milk. She said,

”The process of weaning is gradual and at the same time very pivotal for both the mother as well as the infant. It may vary with each baby. Hence, it should be handled carefully making sure that the baby continues to grow well and stay healthy.”

Narasimhan noted that mothers often had trouble weaning their babies and stuck on how to go about it. She stated,

“When it comes to introducing your child to a new environment, especially with feeding, ‘mother is the best judge.’ She can decide at her own comfort when to wean her child, once she is aware whether her baby is ready and can make a choice.

There is no need to rush your baby into weaning, and this can be achieved diligently by understanding how the baby is becoming more accustomed to the outer environment both physically and mentally.’’

Narasimhan added that the best time to wean one’s baby was known naturally, when a mother noticed her little one initiating the need for a change.

”Some babies may wean quickly and withdraw from mother’s feeding while few may find it harder to let go of breastfeeding and may continue for a longer time,”

A paediatric nurse and paediatric nutritionist, Mrs Alexis Essien, described weaning as the process of gradually introducing family meals to a baby while withdrawing breast milk completely. She said,

The paediatrician said that according to the World Health Organisation, a baby ought to be weaned off breast milk. She said,

“Getting a baby off breast milk is actually dicey. Going by WHO standard, by two years of age, a baby should be weaned. But here’s my suggestion, wean a baby when he or she is ready. It’s not a detachment from the mother.”

Essien noted that there were guidelines on how to wean a baby off the mother’s breast milk and how mothers did that was important. She noted that it’s not done suddenly, adding that it should be done when a baby has developed some form of independence. She said,

“Weaning is likely to be a big change for toddlers because for the most time, breastfeeding is more about security and comfort than about food, so weaning can be quite stressful. This means it’s probably best to avoid weaning when there are other major changes in a child’s life for example, toilet training or starting day care.

“Also, weaning should be done when a child is stable, not then they are sick. There are tips to successfully win a child;

Make sure you have a good support system (dad, grandma, nanny. Reduce the frequency and duration of breastfeeding gradually).

ALSO SEE: Why Mum, Natasha Keane, Will Keep Breastfeeding Her 5-Year-Old Until The Preschooler Asks Her To Stop

Remember that milk production is dependent on the sucking reflex (baby sucking).

Depending on your baby’s age and how much he or she needs to suck, you can wean on to a cup or a bottle.

If you need to wean your baby from the breast under 12 months old, you will need to feed your baby infant formula (preferably cup & spoon not bottle feeding). Your toddler or baby should have been on complementary foods and tolerating them well.

Children tend to be more attached to the first and last feedings of the day, these feedings might be the last ones your child drops.

Try and sleep in separate rooms during the weaning period, be ready for increased crying, whining, clinginess, or tantrums and refusal to eat, look for other ways to comfort your baby – reading, singing, playing – to divert their attention.

If you experience engorgement during the weaning process, apply cold compresses to your breasts to help decrease swelling and discomfort. Also use a breast pump.

If you have a child who refuses to drink regular milk and no longer nursing regularly, you can offer yoghurt or cheese as substitutes.

Make sure you mix milk into their local cereals, (above one year old), but homemade food preferably.

Wearing a shirt/dress that is less accessible for nursing also helps. Expect a change in the consistency and frequency of your baby’s bowel movements.”

She also urged mothers to resist comparing their situation with that of other mothers. The paediatrician added,

“Make sure you still spend plenty of time with your baby and give him or her lots of cuddles. Weaning is not a time to run away from your baby, she needs support and assurance. So cuddle, cuddle, and cuddle.

Lastly, you should wean your baby off breast milk when you are fully sure your baby is eating well and gaining weight. Don’t wean because a mother is weaning her baby. Study your baby to be sure he or she is ready for weaning.”