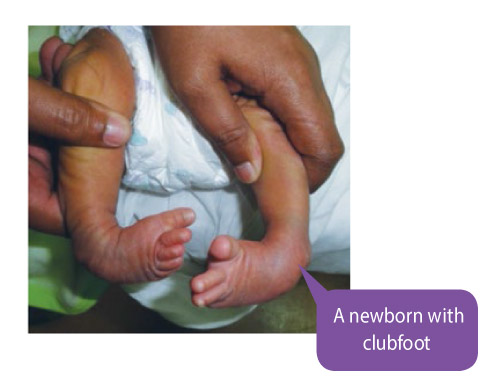 The President, Nigerian Orthopaedic Association, Prof. Kunle Olawepo says untreated clubfoot in children can cause a lifetime of disability.

Clubfoot is a birth defect in which the foot is twisted out of shape or position. The cause of clubfoot is unknown but babies with the condition are usually otherwise healthy.

In clubfoot, the foot appears twisted and can even look as if it is upside down, and despite its appearance, it doesn’t cause any discomfort or pain.

According to Olawepo, it is important to educate Nigerians that clubfoot is a treatable condition. Olawepo also said that no fewer than 100,000 cases of clubfoot are recorded in the country annually.

The NOA President stated this in a statement on Thursday in Calabar to commemorate the 2021 World Clubfoot Day.

Annually marked on June 3 around the world, World Clubfoot Day is an initiative of the Ponseti International Association to commemorate the birthday of Ignacio Ponseti, the pioneer of the Ponseti technique for clubfoot.

However, treatment is usually successful and includes stretching and casting (Ponseti method) or stretching and taping (French method). Sometimes, surgery is required.

The NOA president, who said that thousands of children were living with the debilitating condition worldwide, added that clubfoot was the most common musculoskeletal birth deformity affecting newborn babies globally each year.

He noted that although the cause of clubfoot was unknown, it may be a combination of genetics and the environment.

He said that identified risk factors include family history; if either of the parents or their other children have or had clubfoot, the baby is more likely to have clubfoot as well.

Other risk factors, Olawepo said, include congenital conditions, environment and not having enough amniotic fluid during pregnancy.

The orthopaedic said that the objective of the day was to raise awareness about clubfoot and its treatment through the ponseti method; a non-surgical treatment that involves the manipulation of the feet through temporary bracing.

“Clubfoot is a congenital deformity; it is also known as congenital talipes. When it occurs, the foot appears to have been rotated internally at the ankle.

“Without treatment, the deformity causes a lifetime disability as it affects the ability to walk.

“People left untreated find it difficult to access education, employment and experience exclusion from the society.”

READ ALSO: 5 Ways To Minimize Your Risk Of Having A Baby With Birth Defects

On prevention, he said that avoiding alcohol, cigarettes, as well as drugs not approved by a medical doctor during pregnancy, would decrease the risk of developing one.

He noted that most cases were successfully treated with non-surgical methods by an orthopaedic surgeon in a technique that may include a combination of manipulation, stretching, casting and bracing.

Olawepo urged the government to carry out a massive health education campaign through the media to create awareness on the condition, which he said is treatable.