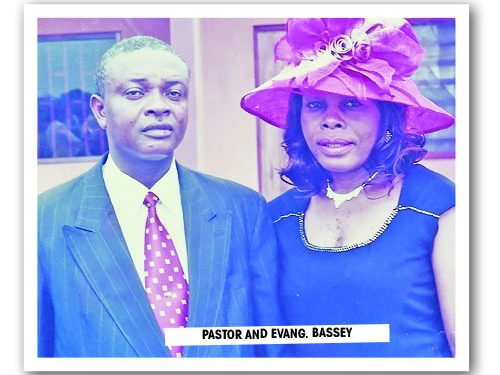 NAFDAC Warns Nigerians Against Using US Recalled Drug, Find Out The Name Of The Drug

Identifying one of the codes to a peaceful marriage, the couple advise couples and intending ones to avoid bringing in third parties to their homes, especially whenever misunderstanding arises in their marriage.

To them, there is need for courtship to save the marriage institution, adding that it is high time young men and women stopped rushing into marriage.

In the opinion of the couple, marriage is not a football field where the players rush in and rush out. The couple are God’s servant at the Peniel Church of God in Calabar and they were ordained into the ministry on December 15, 2020. They are both retired civil servants and had worked in the broadcast industry.

Tell us a bit about yourself

Pastor Bassey: I am from Bakassi Local Government area of Cross River State.  I am 68 years old, and I have HND in Banking. I have worked with the Nigeria Broadcasting Corporation, later Cross River Radio and Radio Nigeria. From there, I worked at the National Orientation Agency in 1998. I have been married for 43 years now. I met my wife at Cross River Radio House when I joined the service.

Evangelist Dorathy: I also worked in CRBC for 35 years and retired in 2012.

So how did you meet each other?

Pastor Bassey: Well, I met my wife at the Cross River Broadcasting Corporation. I was in the internal audit department while she was in the admin department. The first time I saw her, I loved her and I approached her and from there we started a relationship.

After some time, I took her to my mother and she liked her. From there, we got married at the registry at Calabar South. But let me also state here that I was surprised that my mother didn’t oppose the relationship. Even my friends then, especially Ime Inyang, who was in the Radio House but later retired from Akwa Ibom Boradcasting Corporation, AKBC, never opposed the union.

Evangelist Dorathy: Yes, we met at Cross River Radio House, former Nigeria Broadcasting Corporation (NBC) building, along Mayne Avenue/Azikiwe Street in Calabar South. When he first approached me, he told me he loved me. But I didn’t reply immediately till after some time. Then I told him I equally loved him.

What are those qualities that attracted you to each other?

Pastor Bassey: One of the things that made me go to her was her calm mien and composure. She was very organised and spoke sensibly. But importantly, the beauty and her education attracted me to her.

Evangelist Dorathy: One of the qualities I found in him was neatness and cleanness. Again, he was very handsome. Above all, he cooks very well. I can tell you that he cooks better than a woman. If you are not strong as a woman, he can beat you. But I am equal to the task.

Before you got married, how did you propose to her?

And what was your reaction?

Evangelist Dorathy: I accepted the proposal, but not immediately. Later I also told him I love him and would stay with him for life.

Could you remember how your marriage, whether traditional or white wedding, was like back then?

Pastor Bassey: At the traditional marriage in 1978, it was a joyful moment in my life because I was just 25 years then. My friends came and that was the beginning of manhood. But let me say it here that the marriage was a very private one between the two families.

And on that day, I drove my Benly 50 Lady’s motorbike.  Then later, we went to the registry at Calabar South for our court marriage. Then we drove in my fairly-used Opel Car that I bought at Calabar EPZ.

Evangelist Dorathy: Yes, it was a memorable day because I was just 24 years old. There wasn’t anything special on that day. But it wasn’t elaborate because it was just for the two families. There was nothing really striking that happened.

READ ALSO: The Fakunles Offer Some Words Of Wisdom From Their 46 Years In Marriage | Interesting Read!

How have you been able to handle misunderstandings in your marriage?

I used to club very well and I would adjust anytime she raised issues about it. Most importantly, when I offend her, I do boldly tell her that I am sorry without allowing a third party to come in. And the misunderstanding does not last long.

Evangelist Dorathy: Yes, the first misunderstanding was as a result of his late night outings. He was a club man. He was then enjoying himself by going out without telling me where he was going to. So, I went and reported to his mother. But the misunderstanding didn’t last long, and we settled it.

Pastor Bassey: She loves fruits a lot till now and eat it mostly first thing in the morning. But her favourite soup is draw soup and takes it with eba (garri).

Evangelist Dorathy: His favourite food is eba. For soup it is affang. Then the second best soup he likes is draw soup, either ogbono or okra.

How has your experience been generally in the last 43 of marriage? What are those hobbies you enjoy?

Pastor Bassey: We have passed through different stages in life. As young couples, we had high expectations. But as we moved on, we realised that life is not a bed of roses. For instance, when we got married, there was no money as such.

But we had fun because I always carried her on my Benly 50 Lady’s motorbike then, until I bought my first car, an Opel. Since then, we kept managing and today we are fulfilled because in spite of all odds, we were able to train our four children. Besides, I am a very social man. As a young man, I used to go to night clubs and danced a lot. I love foreign music especially, jazz music.

I was a footballer. I played for NBC football Club, CRBC team, The Microwave FC, the first team that was established in Calabar. But because of age, I can’t play football again; I don’t club anymore. But I watch football a lot and I am an Arsenal fan.

Evangelist Dorathy: My experience in the last 43 years has not been an easy one. It is full of sorrows, joys and great expectations. You know these our husbands, they leave rearing children for wives, though they leave up to their financial obligations.

At a point, we were owed salaries because we were salary earners. But we found a way to get through it. Then as a young woman, my head was very hot. I was very hot tempered. If you offend me, I would revenge immediately. But now, I don’t do all those things again. Socially, I was a good dancer and then listen to good music. Again, I read a lot till this moment and I still listen to good music and radio.

What advice do you have for the young ones and intending couples?

Pastor Bassey: To young men about to go into marriage, I advise them to look before they leap. They should consider character and home upbringing. They should not be greedy about things of life because greed has killed the young generation nowadays.

For instance, when we got married, there was no big money but we did our marriage quietly as a family thing. We didn’t have money as such, but we kept managing and today the family is doing well. Besides, they should not wait till they have amassed wealth or look for rich families to go into.

Marry your friend and don’t rush into marriage because others are going into it. There is need for courtship. Importantly, pray about it so you would be directed. Young men should also learn those good qualities that made their parents successful in life. I think one of the causes of divorces these days is lack of understanding on what marriage is all about.

Men should learn not to swallow what they cannot take in marriage. Furthermore, don’t copy your peers or friends in marriage. Leave your normal life. To intending couples, they should also be tolerant and know they are in a life-long relationship.

Evangelist Dorathy: To the young ones, they should learn to court, because courtship is very important in marriage. When you engage in courtship, you would be able to know each other behaviour, character, weakness and strengths and perhaps know the family you are going into.

You don’t just rush into marriage without courtship because marriage is not like a football field. For the newly-married couples, they should learn how to be patient and be submissive to their husbands. They should also seek the face of God, know their blood group and they shouldn’t bring in a third party, because it destroys marriage.

If they have misunderstanding, they should sit down and settle it immediately. For the younger wives, they should not compare their husbands with another person. Let them know that marriage is tolerance, love, understanding and communication.