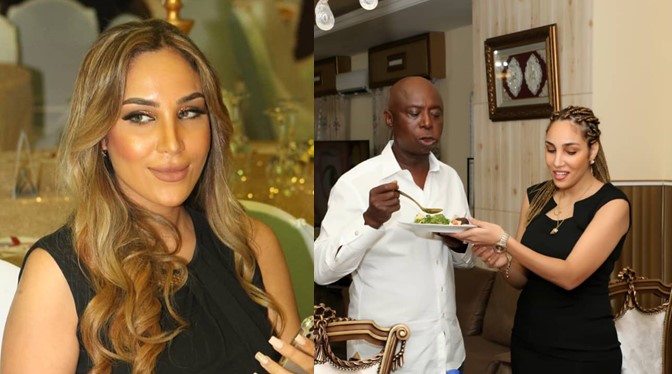 What Is Your Take On Governor Ayade’s Aide’s Advice On This: ‘If You’ve Been Experiencing Financial Crisis Since You Met Your Partner…’

Actress, Regina Daniels Nwoko’s co-wife, Laila Charani has made a shocking revelation in regards to her relationship with their husband, billionaire businessman, Ned Nwoko.

Laila, Ned’s fifth wife has hinted her fans that she and Ned have gone their separate ways. The beautiful model and mum-of-three made the shocking announcement on her Instastories some hours ago.

Although she didn’t give reasons for divorcing her husband, she asked people who followed her on Instagram because of him to unfollow her. She also threatened to block anyone who leaves a negative comment on her page.

“Hello Guys, I just want to say that no one has the right to talk about my marriage. Please stop talking about people’s lives and I have divorced him already and nothing between me and him. Anybody following me because of him can unfollow please. Thanks. I’ll block any negative comment.”

READ ALSO: “How we fell in love and got married within three weeks” Ned Nwoko & Regina Daniels Share Love Story In New Interview

Laila’s recent outburst was shortly after Regina Daniels’ fans noticed that they were no longer in good terms going by a recent happening between them.

The duo who had always given fans the impression that they were fine with being each other’s co-wives recently gave them a reason to think otherwise.

It was also observed that Laila had unfollowed Ned Nwoko and Regina Daniels on social media and they reciprocated the gesture.

Meanwhile, the actress who has been on vacation abroad with her son, Munir and husband seems unperturbed by the new development while some netizans are saying she might be the next to bolt from the union due to the huge age difference.