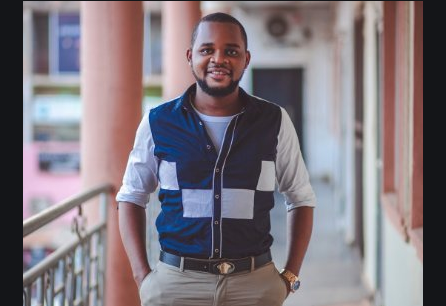 A Nigerian man has taken to Twitter to share his family’s experience in reaction to a man who complained that his wife has refused to care for his aged mother.

The man, @WarriorsAbia stirred reactions on Twitter days ago when he shared a marital issue he is currently going through.

According to the man, his wife wants him to abandon his mother who is aged and blind. He noted that he is living abroad and his wife is in Nigeria taking care of their two young kids.

He added that he invited his mother, who is aged and almost blind, to stay with his wife so she can care for the elderly woman but his wife has a problem with his decision. 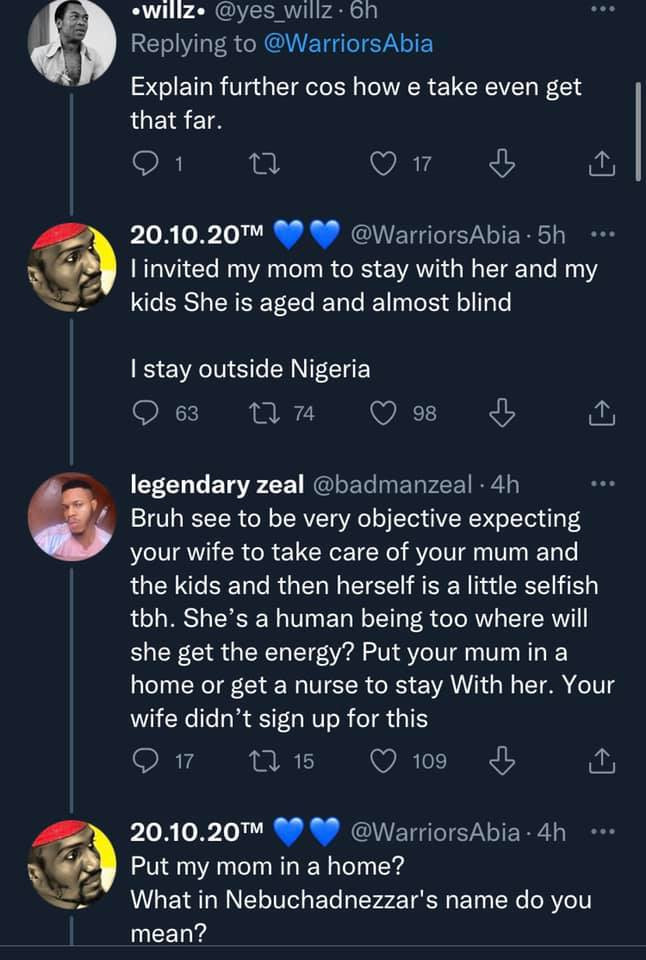 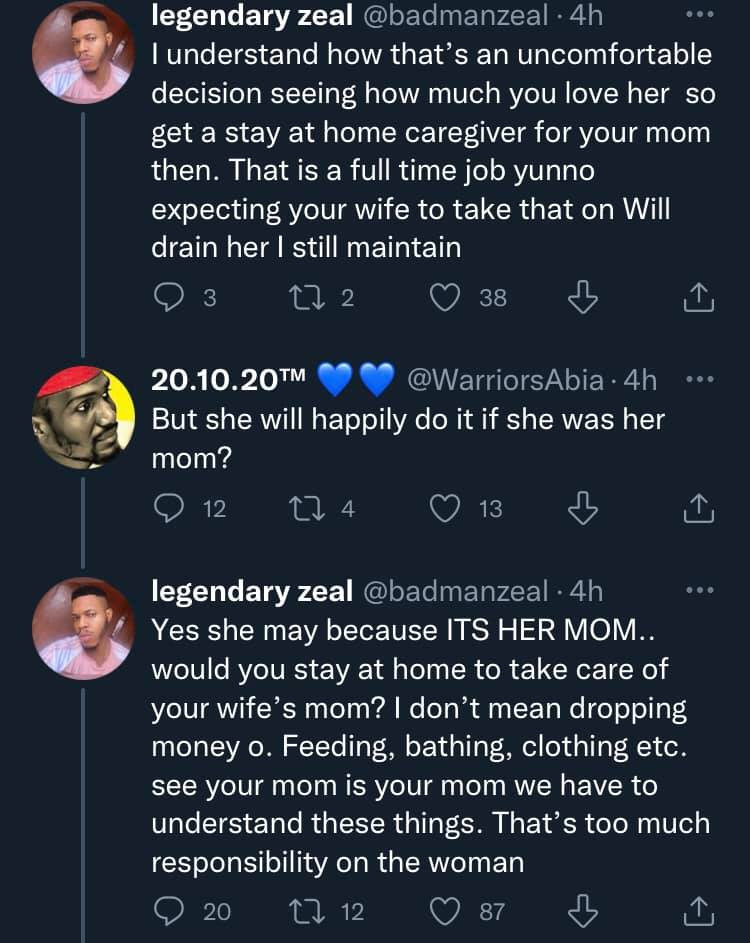 His post led to a debate. A particular Nigerian man named Ugwunna Ejikem shared a counter opinion stating that most Nigerian men are wicked and love to see their women suffer.

Ejikem queried the man for asking his aged mother to stay with his wife who already has kids she’s taking care for, when he could have gotten a caregiver instead.

The doctor went on to share his personal experience of how is elderly grandmother came to live with them and how it was hard for every family member, despite them employing professional caregivers.

He noted that in a short while, a number of caregivers left because the job was overwhelming. He asked why a man will expect his wife to be comfortable with single-handedly caring for two young kids and an aged mother while the husband is abroad. 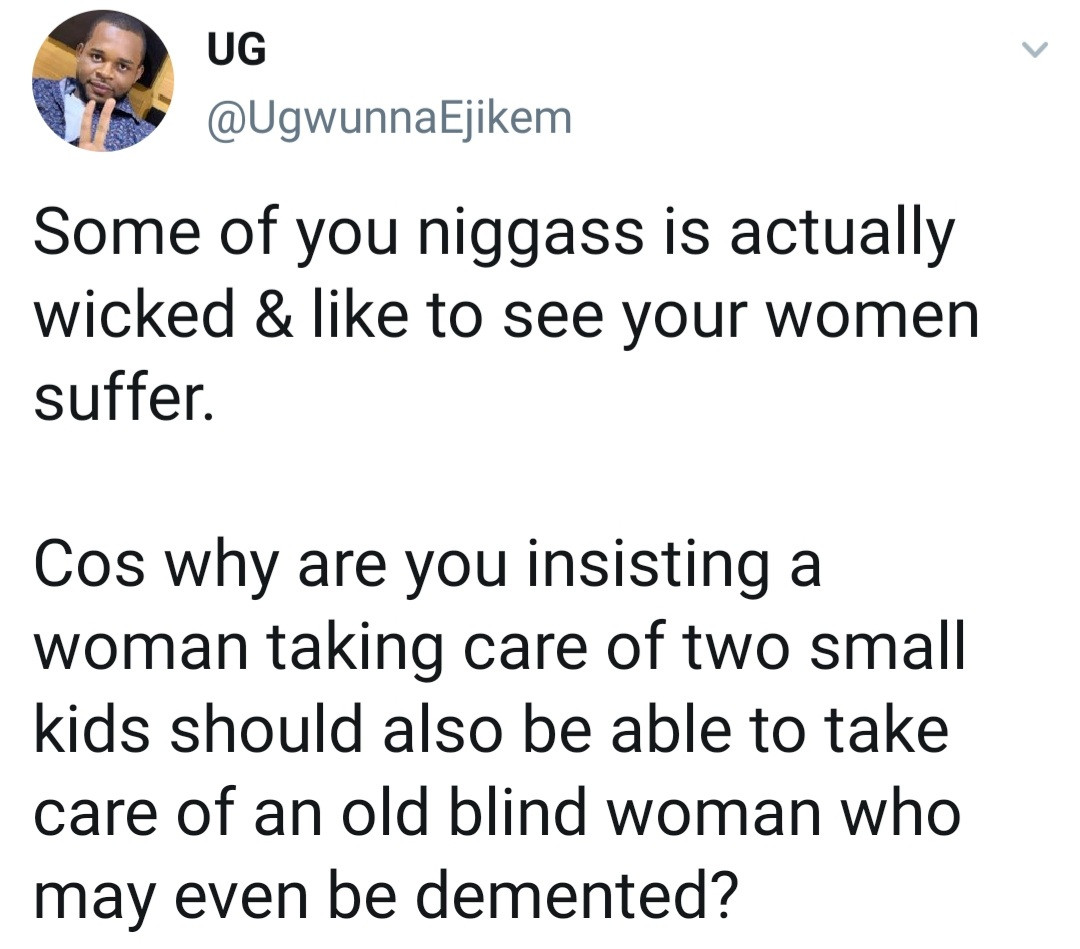 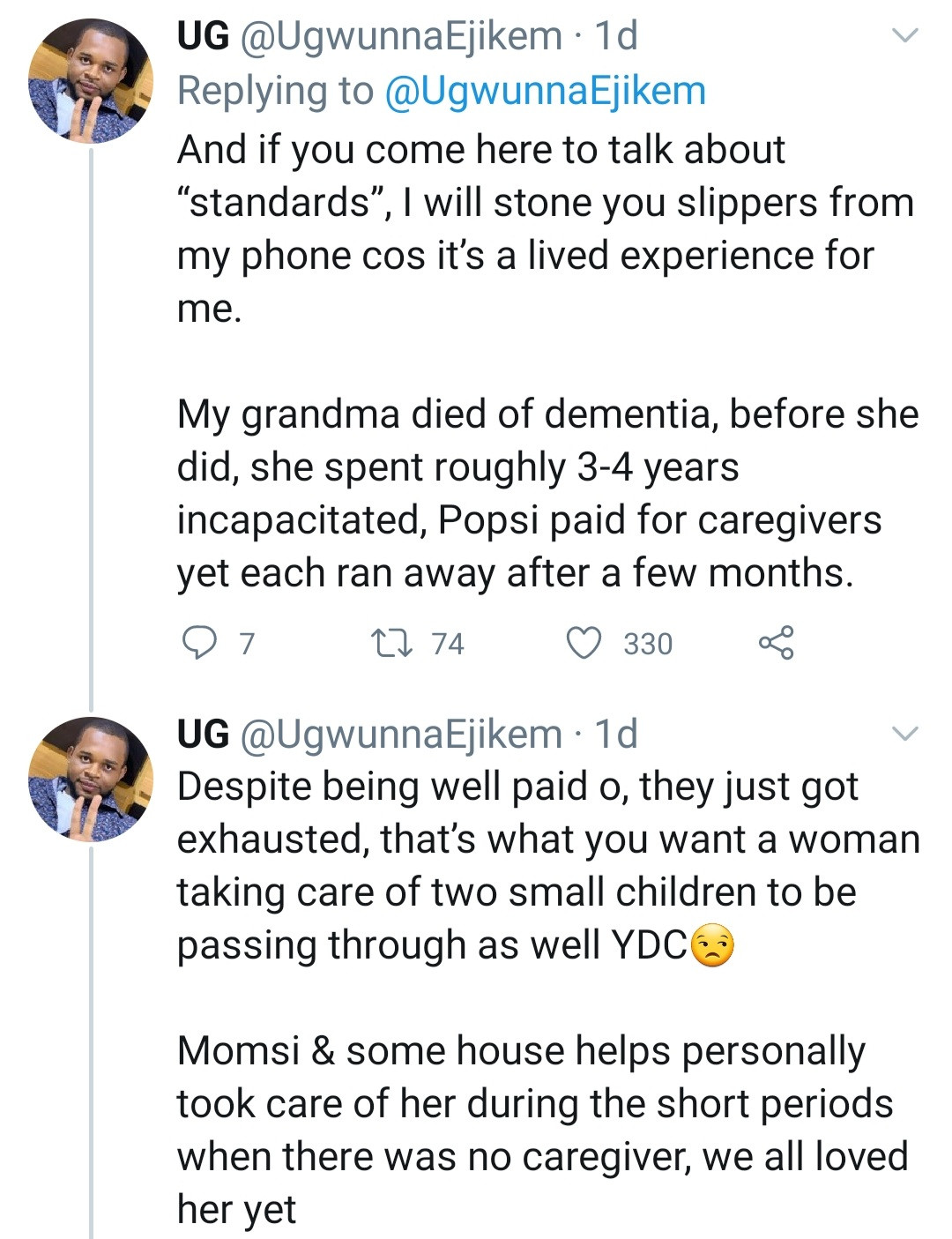 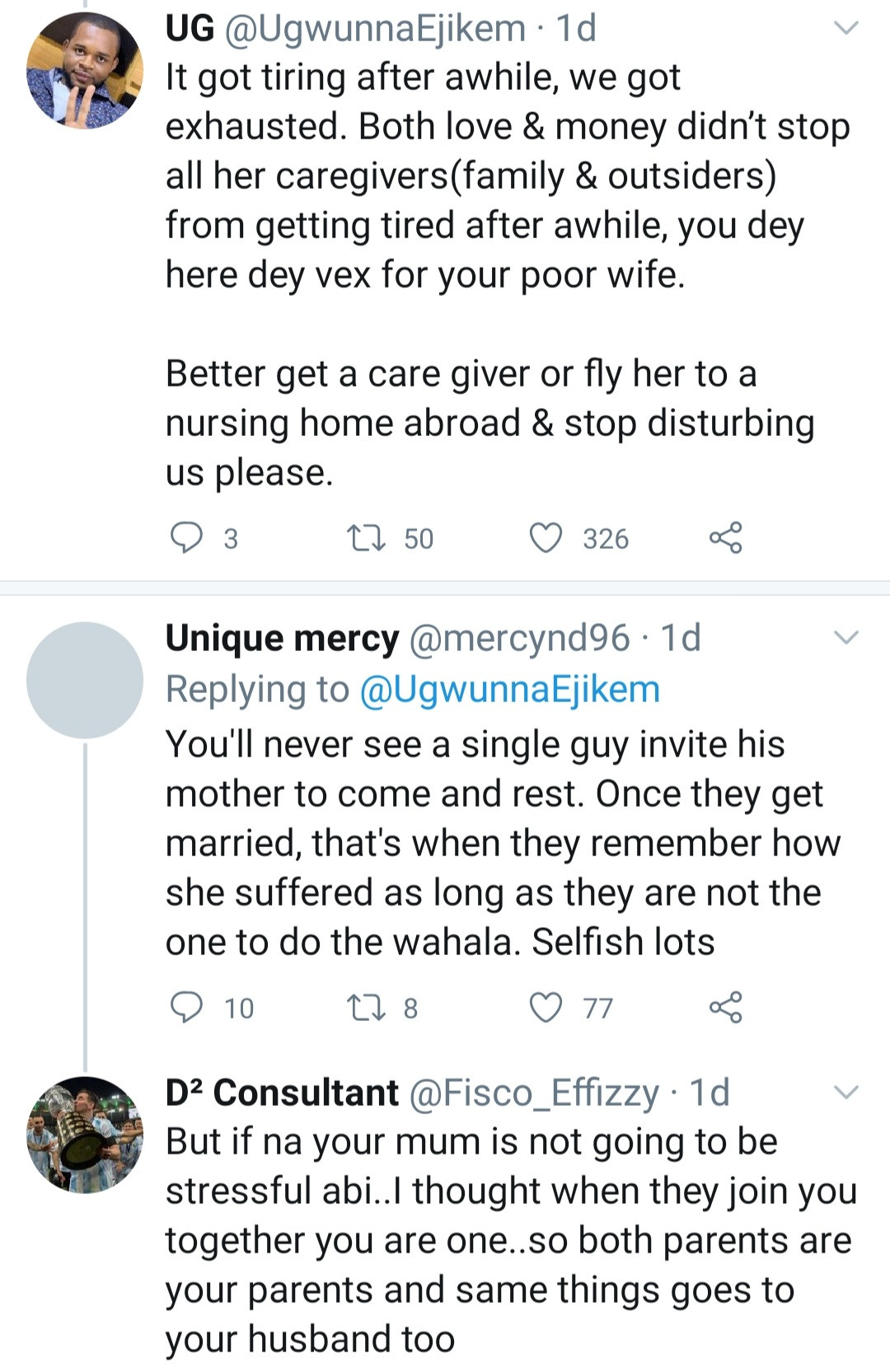 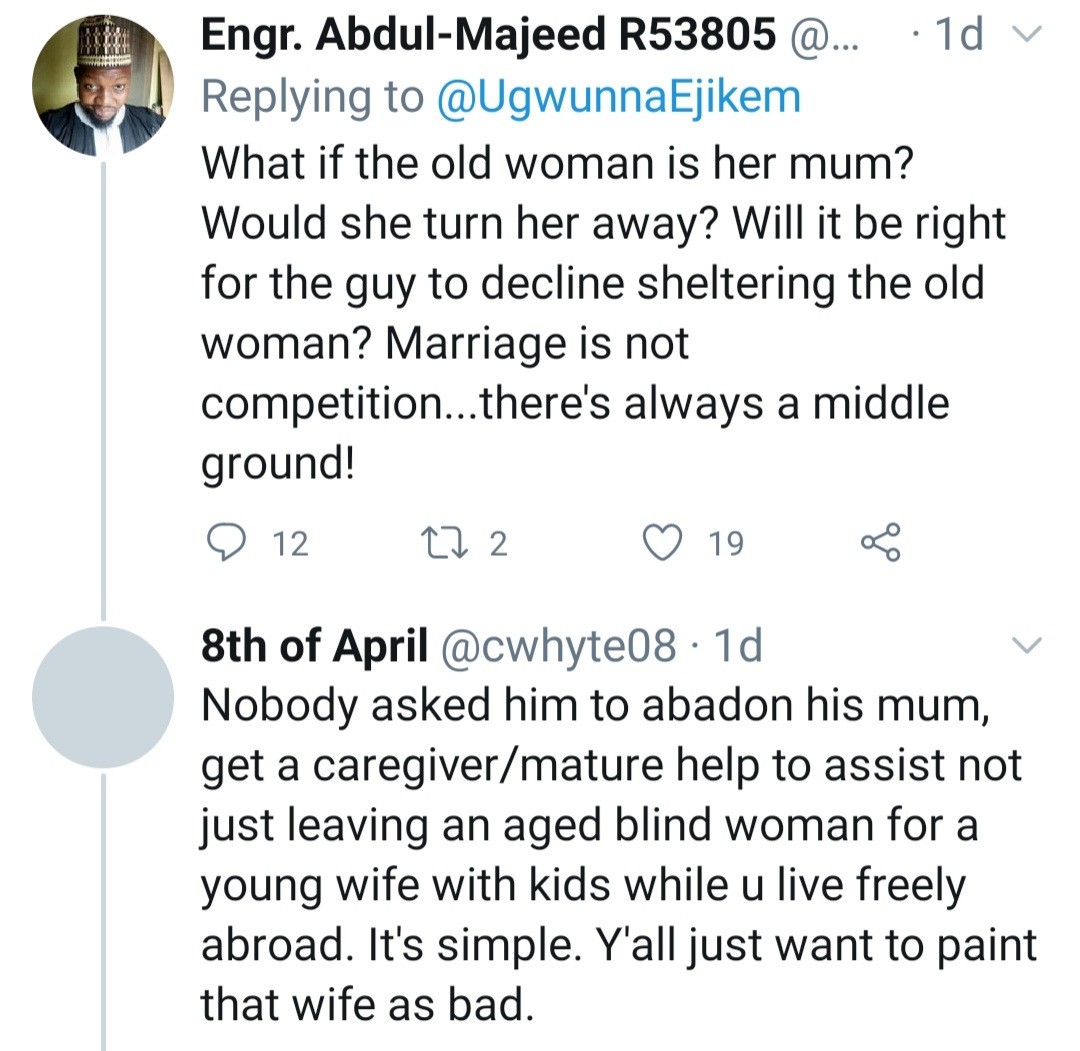 Staying with her when she’s healthy is a different thing, although some can also be troublesome even when healthy. But when she’s helpless to the point of not seeing clearly ,why should he put that pressure on his wife? Let him get a caregiver for her. Women go through a lot that’s why they end up being sick at old age, or he wants same thing to happen to his wife

But when a man is sending money and paying the bills of wives family, it is not suffering, but for the wife to take care of his mum is suffering, men wont turn down their mother in law coming to stay with them but most women won’t accept. Those women that say men are not the prize, I ask you men are not the prize and mothers in issues of her son fight with daughter in law and wife in the issue of her husband fights with mother in law….lol. Men don’t know women

Ugwunna Ejikem May God blesses you for standing for the truth. I told my husband to bring my mother in-law to stay in my house, she is 84 years old, I totally regretted doing so for it was too hectic for me, upon my last child is 17 years old .Even the woman we employed to take care of her, later abandoned us.

The adult pampers we bought for her, she rejected it. She started peeing in her room it was terrific that I told my husband that I can’t take it anymore not to talk of a woman with two kids. Am sure he has married white woman there, let him send his mom to stay with them there, there they ll be washing and cooking for their wives abroad once they marry here they turns our women to slaves

I did it. I took care of my husbands mother and I regretted it. If it was my own mom I can talk to her how I want but this one enh u can’t complain, she will turn the story round. Very unappreciative people. My dear one day I snapped and packed my children and left. After all I was working. No one told him he moved her to his sisters house and begged me back . Next thing I saw the sister had returned her to her house and hired 2 helps.

Women go through a lot of battles all through their lives. I said it the first time this was published and I completely agree with this writer. Taking care of kids on your own is already exhausting adding another person to care for whether it’s you or your partner’s parent to that is recipe for turning that woman herself into one that would be needing same care in the near future.

Mama is in this state because of everything she had to do to care for you all by herself, why then repeat the cycle? Is your wife taking care of her personally the only option? Did you agree to explore other options to achieve the same goal or its just the wife who must do it to show your own love for her? And for those talking about money…you can spend and make money over Me over again but your health once compromised is likely to remain compromised.