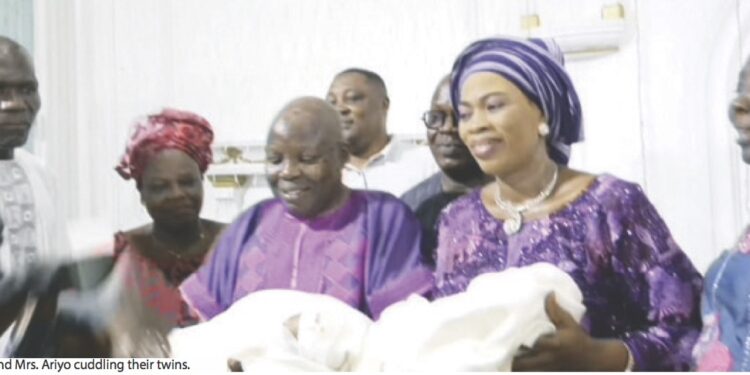 Mr Ariyo Gabriel, a school principal in Lagos State, and his wife, Modupe, a school proprietress, have received part of their reward on earth.

The couple got rewarded for their patience and strong faith in God with a double portion when Modupe gave birth to twins on January 25, 2022 after 23 years and one month of childlessness. As would be expected, the joy of the couple has been unspeakable.

Narrating the story of their long walk to parenthood, Ariyo told Daily Sun that he got married to Modupe in December 1998.

The couple had, since their wedding, been trusting God for the fruit of the womb. Despite several suggestions to try some other ways to have children, Ariyo and Modupe resolutely chose to follow the plan of God.

Ariyo recounted the story of their testimony:

“My wife and I took a decision that if God would not give us a child then we would remain childless. It was not easy to stick to that decision because there was a lot of pressure from people, but members of my immediate family were very cooperative.

They understood what it means to wait upon the Lord. But some other people in the extended family bombarded us with prying questions,  but we thank God who gave us the grace to stand firm with faith in the unfailing faithfulness of Jesus Christ.

People suggested that we go to Egypt, to seek help from herbalists and so-called spiritualists, but we chose to take the matter to God. My father in the Lord, Pastor Femi Akande of Sanctuary of Grace Ministry, consistently said that God would give us our own children.

Even my wife held strongly that confession. My wife never doubted any of the messages God gave to us and each time any member of the family had a naming ceremony, my wife would go there and rejoice with the person.

Her younger sister was very concerned about our ordeal. She always wondered how a woman that had no child could be so committed to those who had their own children. My wife attended every naming ceremony held by families and she would actively help out, to ensure that everything was alright.

Sometime last year, she wrote names of her children and gave to our pastor. She was not pregnant then. She bought clothes to demonstrate her faith that she was going to have children. Whenever she was praying, my wife would tell God that she didn’t want just one child.

In fact, she was handling a group in the church called, ‘the Burden of a Woman,’ and would always tell the members that she was trusting God for more than one child. Some people would say, ‘look at this woman, if God should give her one she should be thankful, she’s even asking for more than one.’

One thing I have learnt from her is that you should say what you want and keep confessing it to God, who said in Numbers 14:28, ‘Whatever you say to my hearing that is what I’m going to do.’ She knew what she wanted and she continued to say that to the hearing of God.

She told God she wanted a mixed set of twins – a boy and a girl.  I want to really appreciate her. Her faith kept me going and I decided I would not marry another woman. At the height of not having children, my love for her did not diminish. I kept loving her and believing God with her that one day God will answer us. It was in June last year that she knew she was pregnant.

We had to be doubly sure, so after a short while we went for test again, and also did ultrasound scan to be sure. The scan revealed that she was carrying multiple babies in her womb. Eventually she gave birth on January 25 to a set of twins – a boy and a girl. I give glory to God.

SEE ALSO: And It’s A Happy Ending For Nigerian Couple, Chika And Chinyere Nwokike Who Welcomed Their Bundles Of Joy After 16 Years Of Childlessness

It was just the grace of God that sustained us all through the period we were weeping every month for 23 solid years and yet nobody knew. Everywhere I worked, nobody ever knew that I was trusting God for the fruit of the womb.

Even where my wife was working, none of them knew that she was trusting in God for the fruit of the womb, because we didn’t allow it to show on us. We believed God would do it. It was only our pastor and prayer partners that knew what we were passing through.

By the time the babies were born on January 25th, the news became talk of the town immediately. Judging from the calls that  I have received since that time I decided to do the naming ceremony in the morning so that people would be few, but it was so surprising  that when I got to the venue, I saw that a crowd had assembled before my arrival. I was amazed.

During the trying time we passed through, coping with pressure was something else. There was a particular member that told her that the issue was not a medical matter. But we ignored that and went for several tests, which all showed that we were both okay.

Some people advised that we visit herbalists and I told them we could not do so; I could not even mention such to my wife. When one of them insisted, I asked him to tell my wife himself. When he went to her, she told him point blank that if God would not give her children she would rather remain barren than go to herbalists.

Even one medical doctor told us a shocking thing when we went to his hospital. He asked my wife to come back after three days. When she got there, he told her in Yoruba: “Okunkun lan bi mo, imole lan too. He said it twice.

This is the translation of what he said: ‘You conceive in darkness and you nurse the baby in the light.’ He is a medical doctor but said that there are situations where you have to undergo traditional treatment. I think he uses traditional method to complement medical practice.

That was the last day she visited that clinic.  That was one of the nasty experiences we had. We strongly held to the belief that those who wait upon the Lord will not be put to shame.”

“It was a great experience. The Bible says that weeping may endure for a night,  but joy comes in the morning. All through the period, God was the only hope that I had. I trusted in the Lord because he promised me that I will not serve him in vain and I held to his promise. I believed very strongly that what he said concerning my case he would do it.

I had the conviction that one day I would have my children. There were times the pressure was so much, but I kept on believing God, confessing what God said; I never gave up. I am now 49; before I reached 40 years, I was believing God for one child. But when I clocked 40, I told the Almighty I was due for two.

That was the minimum I was asking God for. I was trusting God for triplets, comprising male and females. And God did it in his own miraculous time. Today, I have my bundle of joy. I can laugh with them, I’m breastfeeding them, I can see the joy of being a mother. I thank God for his faithfulness. Our God is too faithful to fail us. What he has promised He can never fail.

I said the pressure was much, but right from the beginning I trusted God. In the course of visiting different hospitals, I met a medical doctor, to explain my case. He said I should give him some time.  I thought he was consulting with other gynaecologists over my matter.

On a later visit, he said: ‘Madam you will give birth but there are some things I need to do. I need to take baths; I have to drink some concoctions. I left his clinic and when I got home I told my husband. We tore his card that night. I went to several places. I believe in medical solutions to conception challenges.

I spent a lot of money going to hospitals, and trusting only in the Lord God for natural conception. Anything God cannot give me, I don’t want. I made up my mind that I would never compromise my faith. I told my mother so. To the glory of God my mother is here with me.

She kept telling me that the biological clock was ticking. And kept telling her that whosoever wants to receive anything from God will have to be patient. I told her my case was already settled. My mother cried a lot because of my issue. I’m the first born of the family. Each time my mother called me on the phone she would be crying.

Many people did not believe I was trusting God for the fruit of the womb. I had some children in my house; people thought I was the one that gave birth to them. God really helped me. What I went through was not easy but God sustained my faith. So, any other counsel different from the word of God could not stand with me.

I told my mother that anything other than the name of Jesus would never work for me. She started believing that God would answer me one day. To the glory of God she’s now with me to care for the babies. I saw beyond pregnancy, I saw beyond giving birth. The Bible says if you can see it, you will get it. God has done it.

In the course of my travail, I did IVF before it failed. I even wanted to go for the second cycle and made part payment. But we were robbed and we were unable to raise the rest of the money to continue with the process.

Thereafter, I underwent treatment in a private setting. Later the doctor told me there was no result yet. I moved forward and kept on moving till God answered me.”