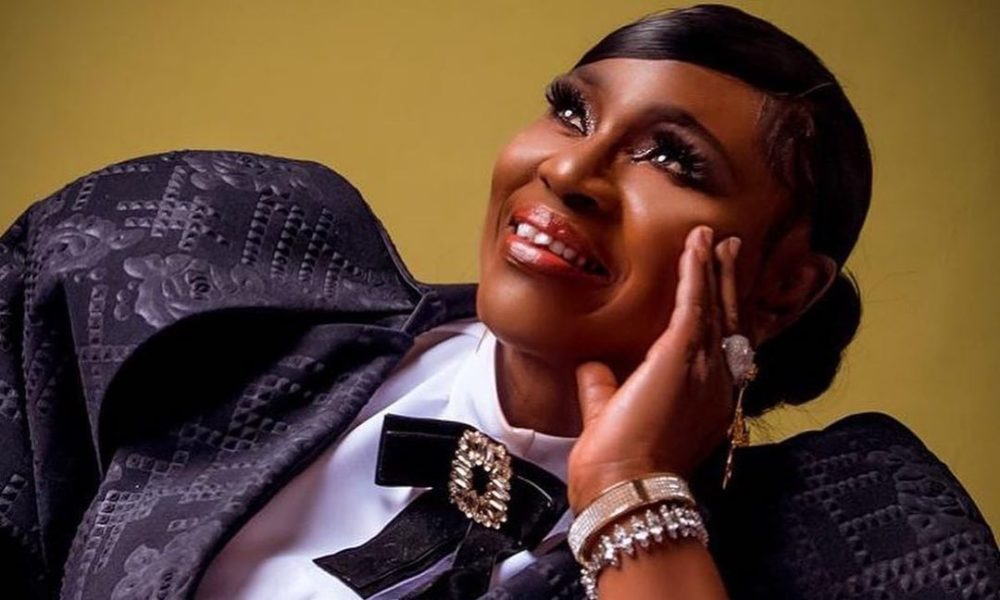 Veteran Nigerian actress Idowu Philips, who is also known as Mama Rainbow, has been widowed for 38-years now.

In a recent chat with PUNCH, the widowed mother-of-five who lost her husband in 1984 and singlehandedly raised her children opened up on the sacrifices she made to train her children to become successful in life and how God finally smiled on her.

The widow revealed that her sacrifices paid dividends recently as one of her children who lived abroad appreciated her efforts and surprised her by building a house for her.

Mama Rainbow also claimed she was the one who bought the land and built the house from scratch but never knew it was for her until the son said so after she completed the building.

The talented actress said she wept when her son gifted her a house. Revealing why she wept, she said:

“I am happy because for someone to be abroad and come home to build a house, he deserves to be praised and appreciated.

“I was the one who helped him to purchase the land but he did not tell me what he wanted to do with it. He only told me he wanted to buy land, and I should help him inspect it, which I did and negotiated (the price).

“I was also the one he sent the money to, and he started the building gradually. When it was time for the roofing, I was the one he asked to help buy the materials to be used, and I did that.

“It was when the house was completed that he said to me, ‘Mummy, you are the one I built this house for. It was so pleasing to me that I wept tears of joy.

“When their father died, there was no one who could help me. I was left with all the children. It was tasking but I’m grateful to God because my child built me a house.”

The A-list actress also disclosed why she was tagged as the cheapest thespian in Nollywood at some point in her acting career.

According to the 79-year-old movie veteran, she was given such a degrading name in the movie industry circle because she stooped low to conquer.

She went on to say it was true that she participated in any movie that came her way, and added that she had to because she was trying to raise money for her children’s feeding and schooling after their father died.

Asked if she felt the house gift was adequate reward for her labour, the actress said,

“It was written in newspapers then that I was the cheapest actress. I was popularly known as ‘Iya Osumare’ then not ‘Iya Rainbow’. If I did not do that then, I wouldn’t have been able to successfully raise my five children.

Even in church, when everyone else bought clothes and jewelleries for the festive season, I dared not do that. The best I could do was to buy (those things) for my kids while I put on rags. It was because there was no money and there was no one I could meet (for help).”

The actress who trained as a nurse before venturing into acting, also said she had to participate in so many movies because she didn’t want to remarry and knew she had to provide solely for the kids.

“I also did not want to get married to another husband. It was not an easy thing to do because I used to trek to some movie locations. However, I am grateful that it has ended in praise.”

Advising mothers who are currently making sacrifices for the success of their children not to die brooding because they lost their husband, she said,

“Don’t say because your husband died, you will brood to death. If you do that, you will end up putting your children in more suffering.

“Stand up and tighten your loins. Look for work that will pay you to train those children to become successful.”

The actress who will be attaining the age of 80 in some months also stated that she is grateful to God for coming this far and she looks forward to the coming years with relish. She added,

“I am grateful to God because my husband died since 1984. God kept me and my children. He sustained me that in my lifetime, my child built me a house and one is also planning to buy me a car.”