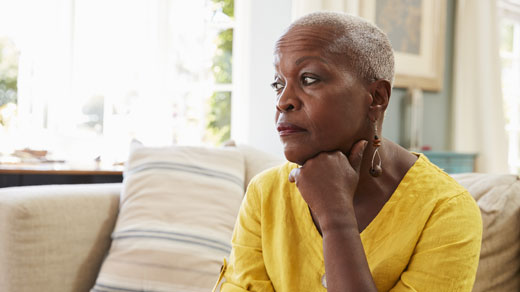 The Medical Director, George’s Memorial Medical Centre, Dr. Faye Iketobosin, has said depression in older women may be a sign of menopause.

Dr Iketobosin, who is an OB/GYN had disclosed this on a radio show on Classic FM, Doctor’s on Air with Dr. Pamela on Wednesday.

The medical expert stated that not all depression were caused by mental issues, adding that it could simply be menopause taking a toll on the body. He also said women in their 40s were expected to experience this more than younger women.

“Menopause simply is a stop to the menstruation period in a woman and it signifies an end to her reproductive journey. The period called peri-menopause is were all the symptoms occur before the period finally stops.

Depression and mood swings would normally occur because the period of menopause affects the hormones, as there is a significant drop in estrogen, the predominant hormone in the female body.

This hormone is what differentiates a woman from a man. It is responsible for reproduction and plays important roles in hair and nails development.”

Iketobosin noted that the most common symptom of menopause in women was hot flushes, were one begins to sweat excessively, but stated that the severity varied from person to person. He also said vaginal dryness, skin and hair changes, bladder dryness and forgetfulness were also symptoms of menopause.

He further explained that although periods become irregular at this stage until they finally stop, the flow of blood is not supposed to be excessive.

“Periods can cease for as long as eight months, sometimes less, but when it comes, the bleeding should not be excessive.

“It is important to note that genetics, physical stature and lifestyle can affect the severity of menopausal symptoms.”

Chairman The Bridge Clinic and host, Doctors On Air, Dr. Pamela Ajayi, lamented that the issue of menopause was not talked about enough in the society. According to her:

“Many women in this part of the world do not understand their bodies and most times they do not know what is happening to them.

When these signs start, our women tend to think they have a problem or health challenge, they do not understand that what is happening is absolutely normal and natural. We do not talk about this enough and there needs to be more awareness.”

Iketobosin had also mentioned that women could still enjoy a healthy sexual life after menopause, adding that lubricants may become a necessity due to vaginal dryness to make sex more comfortable and enjoyable for them.