A US-based Nigerian-born lady, Priscilla has taken to Twitter to narrate a shocking story of how her parents took sides with her abusive ex-boyfriend and when confronted, her father chose to disown his four children.

Priscilla’s father did not only disown them, he yanked them off every benefits from the home front.

Telling her unbelievable story in a long thread, a distraught Priscilla tweeted:

READ ALSO: Young South African Girl, Shonti Narrates Mom&#8217;s Reaction After She Was Raped And It Is Dumb-Founding

“So let me tell you the story of how my parents are currently moving mad and disowned all 4 of their children. A THREAD…”

“There was this dude I used to talk to. One day I was super drunk and this nigga had sex with me. Mind you I was unconscious, and had no memory of what happened the night before. The next day he told me we had sex and I was wondering why he’d have sex with a drunk unconscious girl”

“That’s rape. So after that day I cut him off. My parents on the other hand liked this guy and wondered why we stopped hanging out so I told them he was abusive. The very first time this guy yelled at me I had to hold myself in the fetus position to protect myself. That was the…”

“…same day the rape happened. This man is screaming and hitting things. Anyhoo. I get home, confided in my siblings and they stood by me the whole time but I had no intention of ever telling my parents this guy raped me.”

“Everytime they asked about him I told them he was abusive and he’s scary cos I feel he’s gonna hit me. And my dad LITERALLY said to me “oh that’s bad, he has anger issues and that’s terrible.”

“A little back ground on the guy. His parents recently filed for a divorce in the end of last year because for about 28years of their marriage his father was abusive to all of them. He would hit his mom and his kids.” That’s all he knows, abuse. But he swore he never wanted to be”

“..like his dad. And he seemed perfect until that day. We got in a heated argument on why he’d had sex with a drunk girl and he literally turned red and turned into an animal.”

“So anyhooo. My parents knowing I’m scared of this dude. They know after it ended I had to go to therapy. Even though they had no clue he raped me I believe they should know that was enough for me to stay away from this man.”

“So on Sunday I was suspecting they were still in communication so I took my mom’s phone when she was not looking. I go through it and see my own mother contacted this man and told him I was a child who didn’t know what I wanted and if he still wanted me back she and my dad were”
“willing to come in to help….IMAGINE, IF HE STILL WANTED ME BACK??? My parents knew this man was abusive….”
“My parents knew this man sent me to therapy. My mother went ahead and told him I was in love with him. Someone I hadn’t spoken to in about a month.”
“Then in the text I see they set up a meeting to meet up at Wendy’s last Friday. So at this point I’m furious. I drop her phone back and go to my room thinking of what to do…by the time I came out she had left for work so I step outside the house to call this man to know…”
“…the details of their meeting. He was telling me my parents said I was a child who didn’t know what I want and they like him and want us together and that his anger issues could easily be worked on so it shouldnt tear us apart”
“At this point I’m FURIOUS. I hung up, called my siblings together and told them what was happening and they were all mad so I go confront my dad in his room. One of my sisters follow me. I went to his room and said dad I wanna talk to you about something and he said I should wait”
“So my sister and I were waiting. I sit down on his bed for like 4 mins while he was pressing his phone, then he drops his phone and says ok what’s the problem. So I start…”
“So I had been suspecting you and this guy were in communication, and I took mom’s phone and went through it…”at this point I get emotional and couldn’t get my out words out right but I try anyway. I asked him “do you love me at all?” And he says what kind of question is that”
“…and I asked him why was he getting in contact with this dude and why did they meet KNOWING FULLY WELL I’m scared of this guy? A guy that’s abusive at this point I’m crying…I was like you think being abusive is a flaw??? (In the text my mom said his issues was a flaw and we..”
“…all got flaws anyway)…you know what my dad said? He said he’s my father and will not answer to me and I should get out of his room”
“And I said I’m not going anywhere. I kept going…why are you so desperate to see your daughter with a man you don’t care what kind of man it is? Then he comes to me holding a hanger he was using to hang his clothes saying he would slap me. He said “do you want me to slap you?”
“And I said you can’t slap me and he said he will slap me then my brother comes in expecting to see the conversation going on smoothly but was shocked seeing my dad standing over me saying he will slap me…”

“So my brother says “do you really wanna slap her? Your 27yo daughter is confronting you over wanting her to get back with an abuser and you want to slap her? TRY IT! I DARE YOU! Slap her! I dare you to touch her”
“And at this point I’m sitting on the floor confused and crying like why would he want to hit me? Then my dad faces my brother and said “I will slap you too” my brother took off his glasses and said “I DARE YOU TO COME AND SLAP ME” at this point my uncle and aunty come in the room”

“with my other sister and it’s loud af and my dad and brother gets into it. And out of no where I screamed “do you know ***** raped me? DO YOU KNOW HE RAPED ME? And my dad looks at me and says “are you yelling at me? I’m your father, I gave birth to you”…”
“At this point I’m wondering why what was getting to him was the fact that I was yelling not the fact that I’m telling him this man raped me. Then my brother goes off saying this stupid man raped my sister and NOW that you know you’re angry that she’s raising her voice”
“Meanwhile my uncle was separating my brother and my dad cos punches and hands were being thrown. The min my uncle heard rape he turned into an animal and said GIVE ME THAT MAN’S ADDRESS RIGHT NOW! And he was going off ANGRY AF! Meanwhile the next thing my…”
“…father said was “I disown all 4 of you. You’re no longer my children, leave my house”
“My uncle was telling him “Sir, Priscilla said this man raped her, now we understand the level of her anger” all my dad could say was all of you leave my house NOW! Anyhoo we didn’t leave. I told him to call the cops if he wants to. My dad literally didn’t care this man raped me”

“This whole fight lasted for over an hour. Then my mom texts me from work apparently my dad called her. And she says she was only trying to help get us back together and the man said he would get help blah blah and I proceeded to tell her I was ashamed of her and her husband.”

“Then my dad leaves the house. Anyhoo. We wake up the next day to see he took us off the WiFi and phone bill plans. 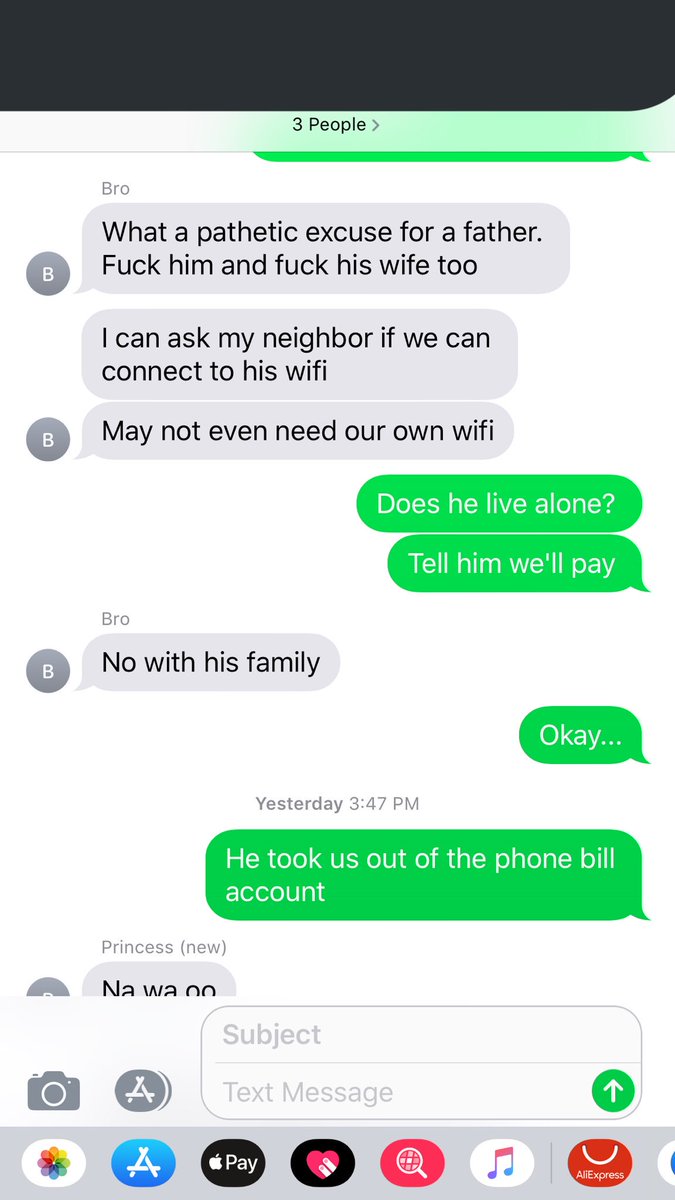 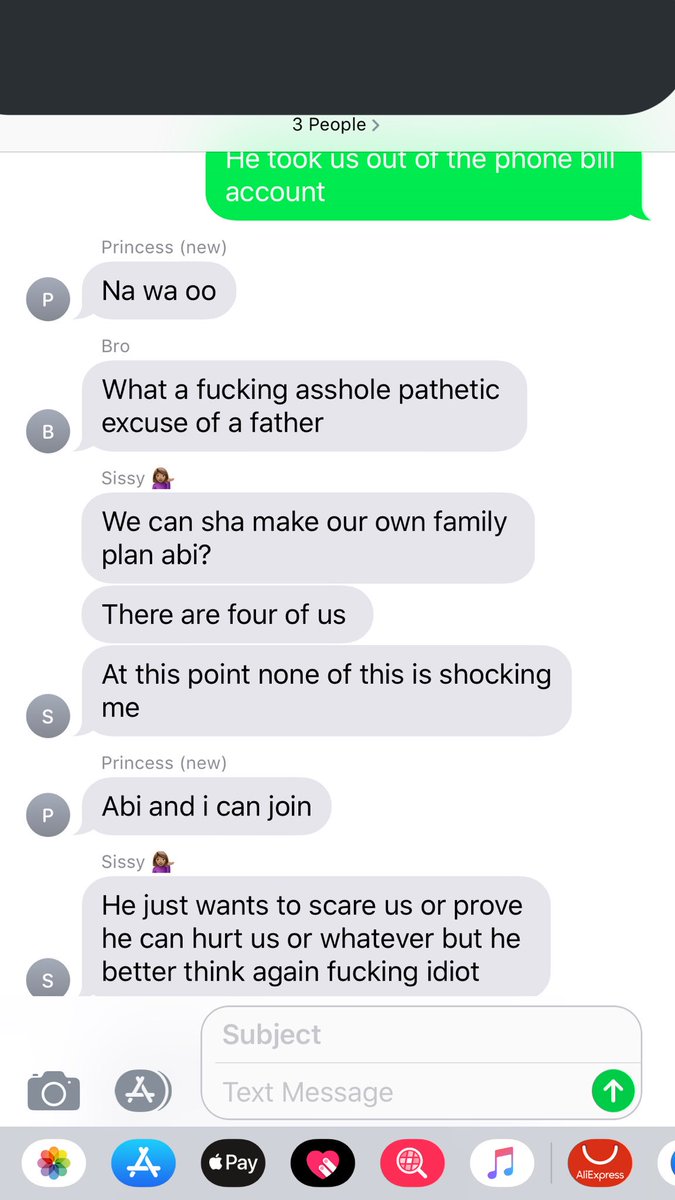 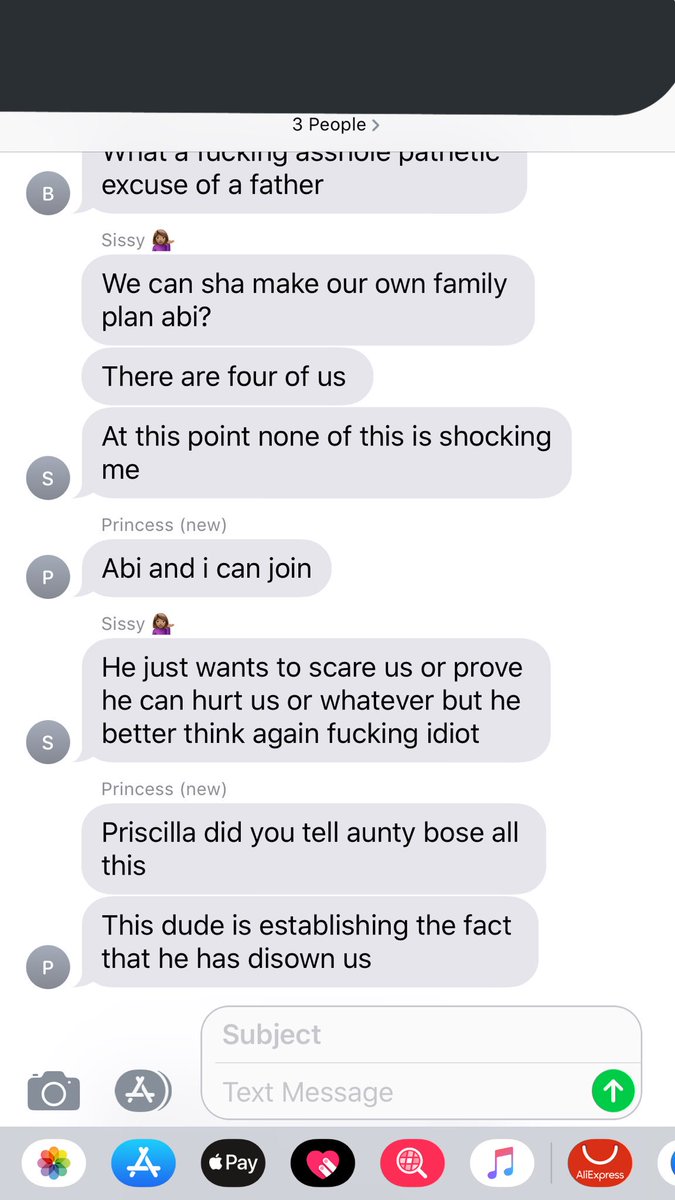 “Before my dad left the house while he was on the phone I heard him say something like “I told her to stop wearing short things” and I GO TF OFFFFFFFFFFF!!!!! I scream in his face and I tell him idc what context he said that he should never have said that….”

“I told him he was a terrible father. I told him I regretted that he gave birth to me and I told him I hate him and if I was to come back again to this world I’d come through any other parent besides him.” 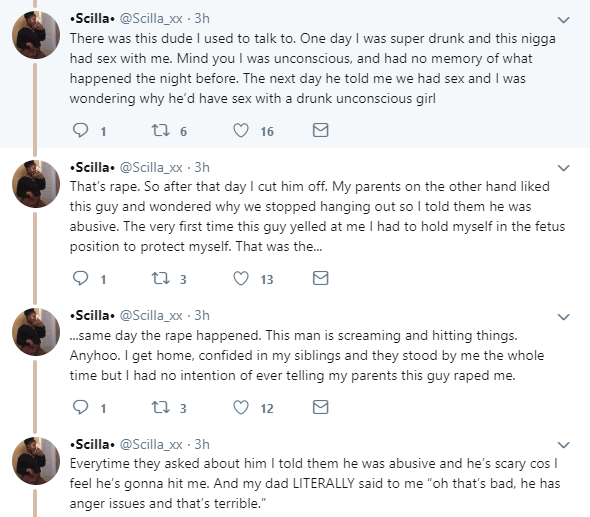 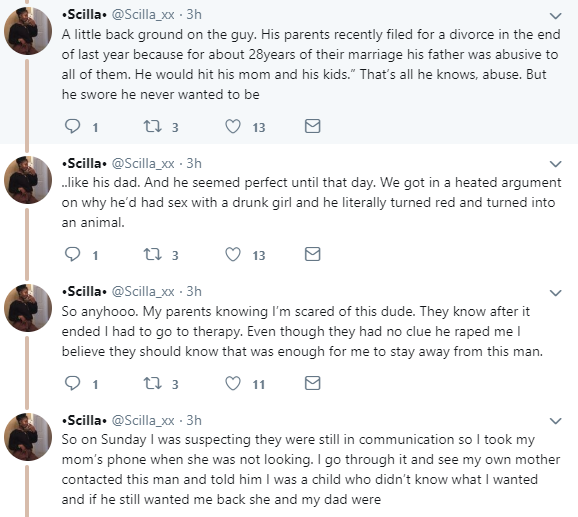 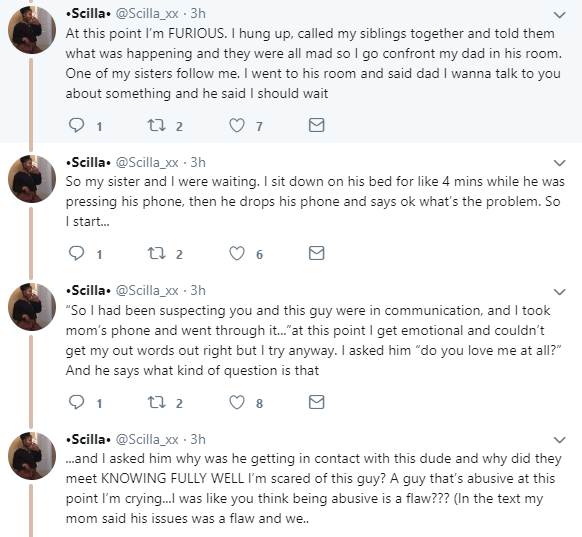 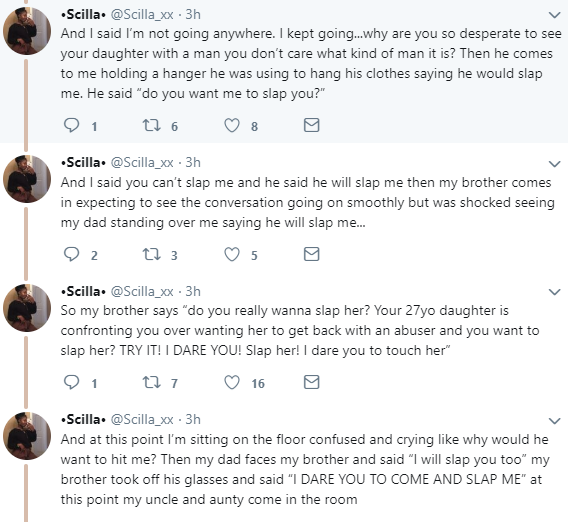 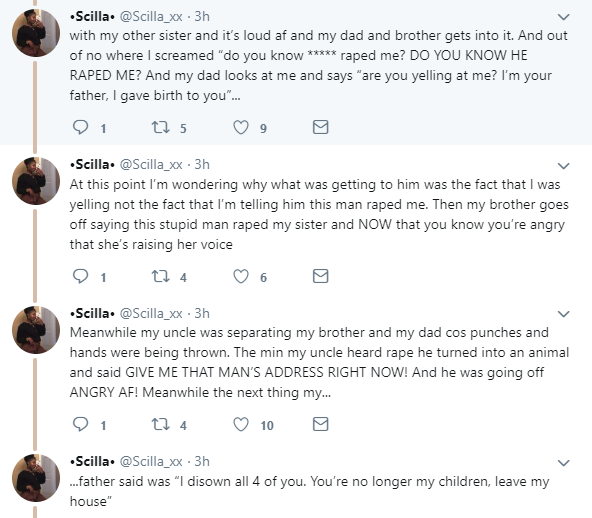 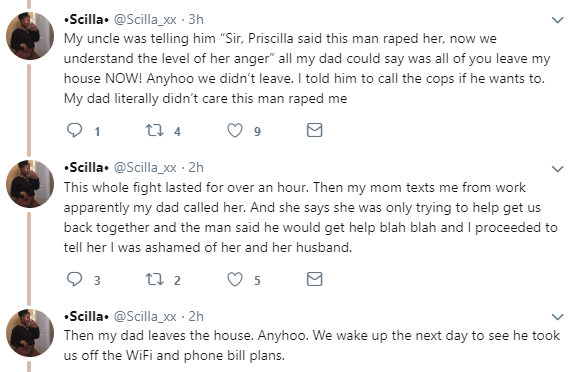 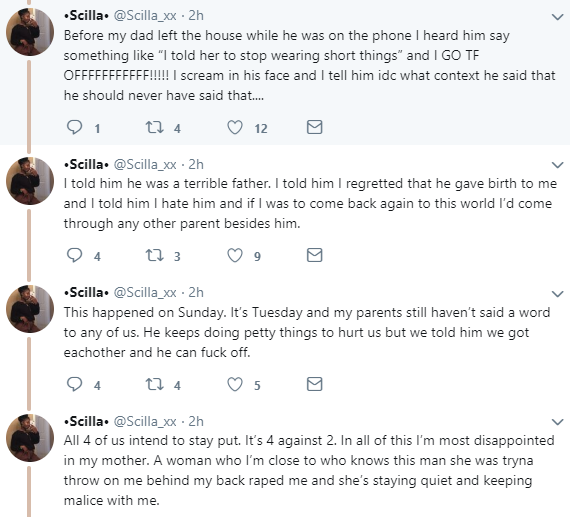 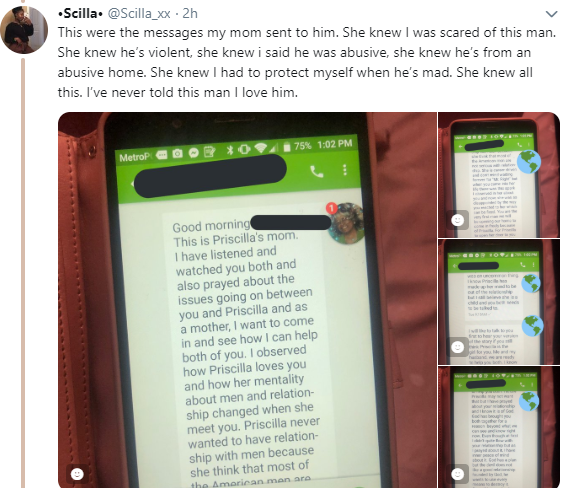 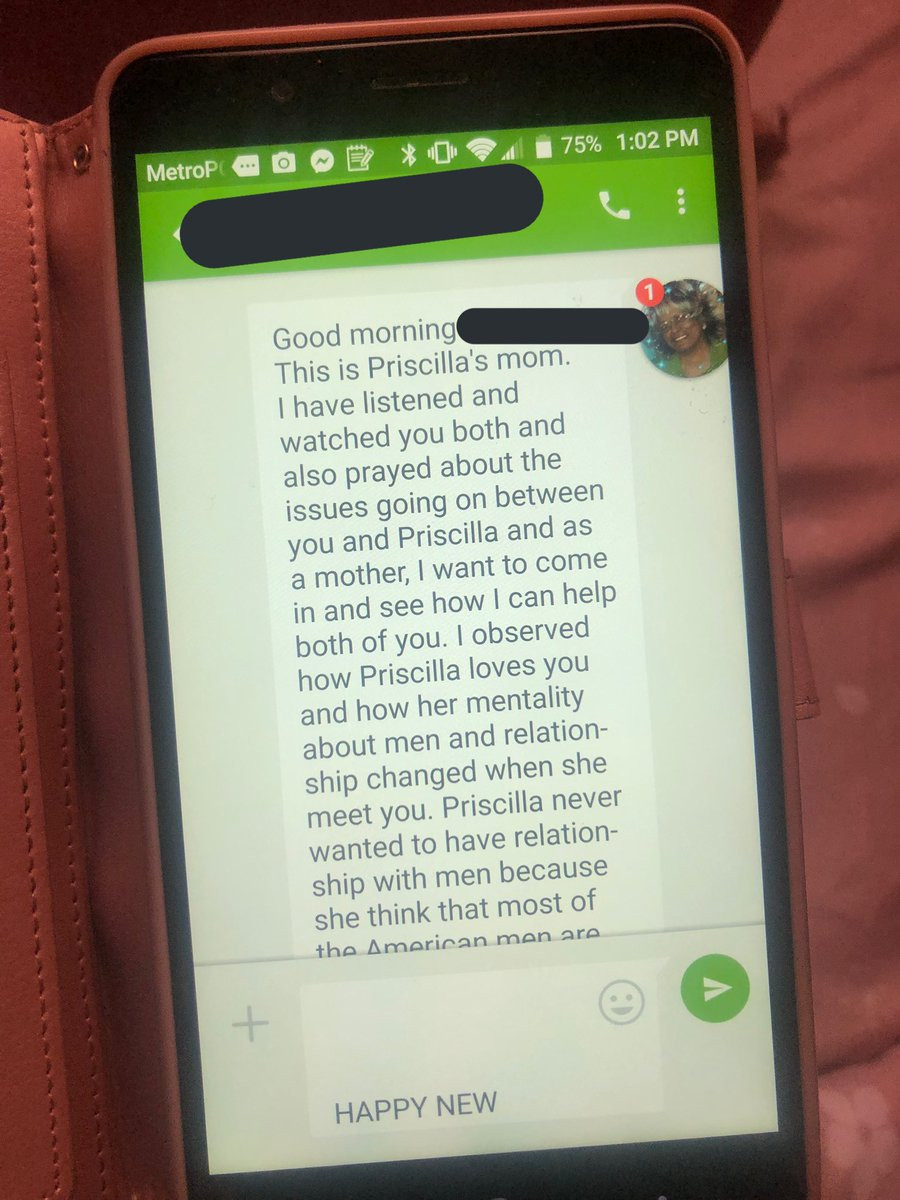 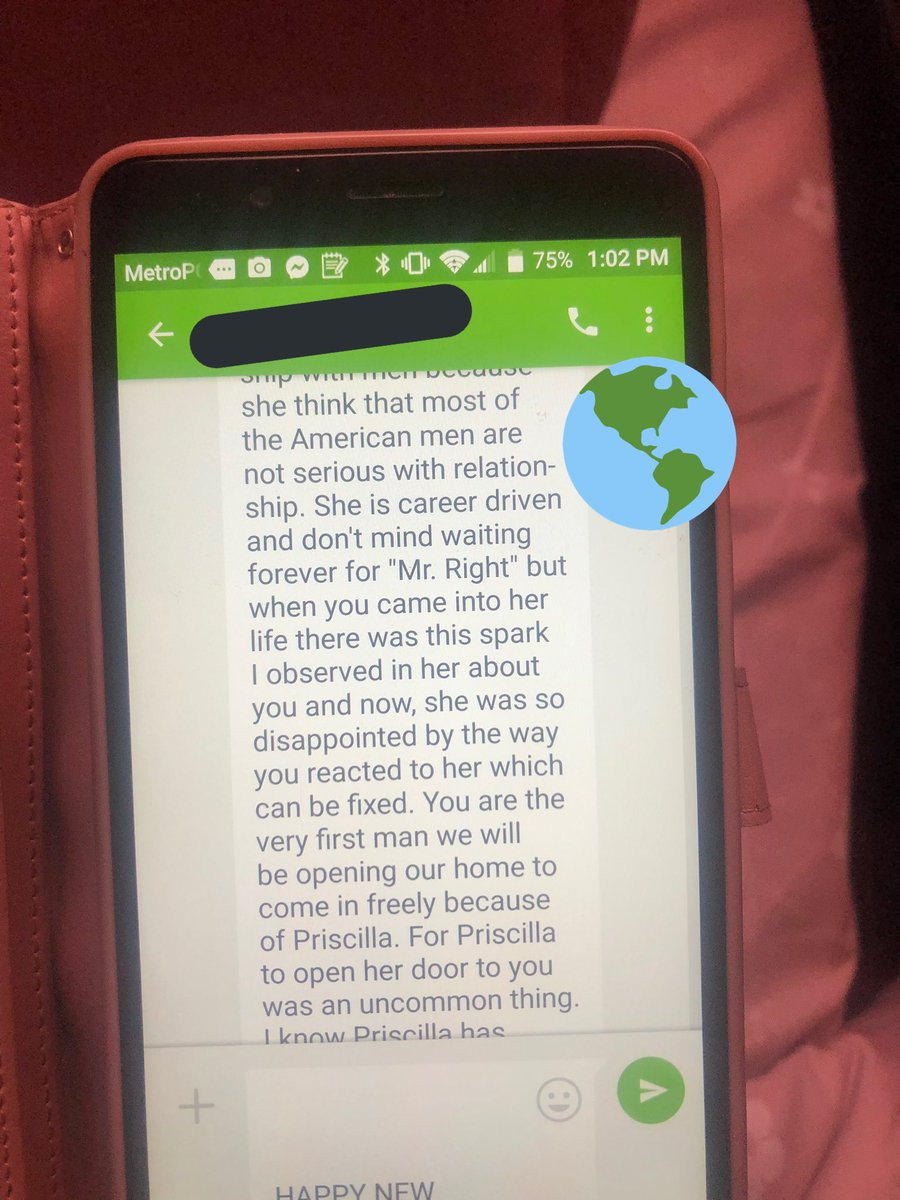 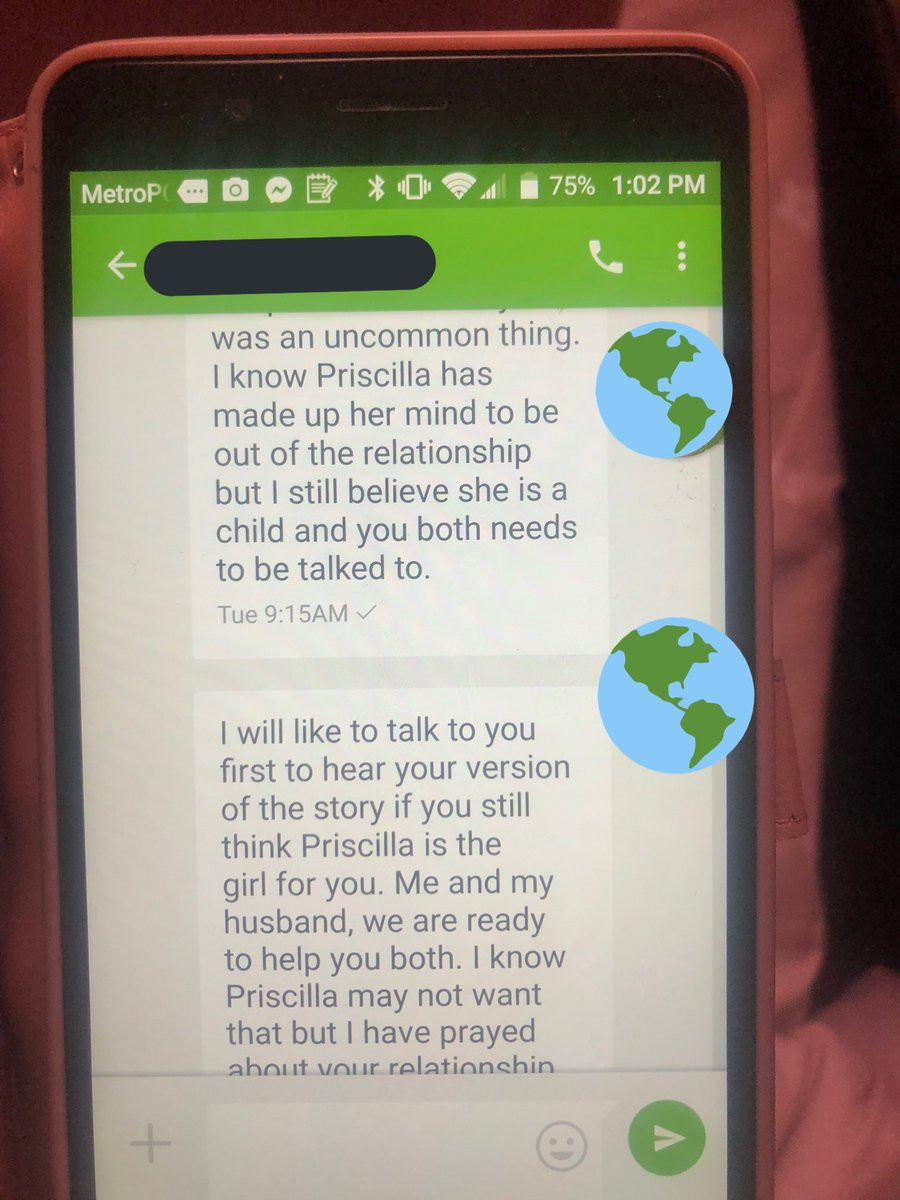 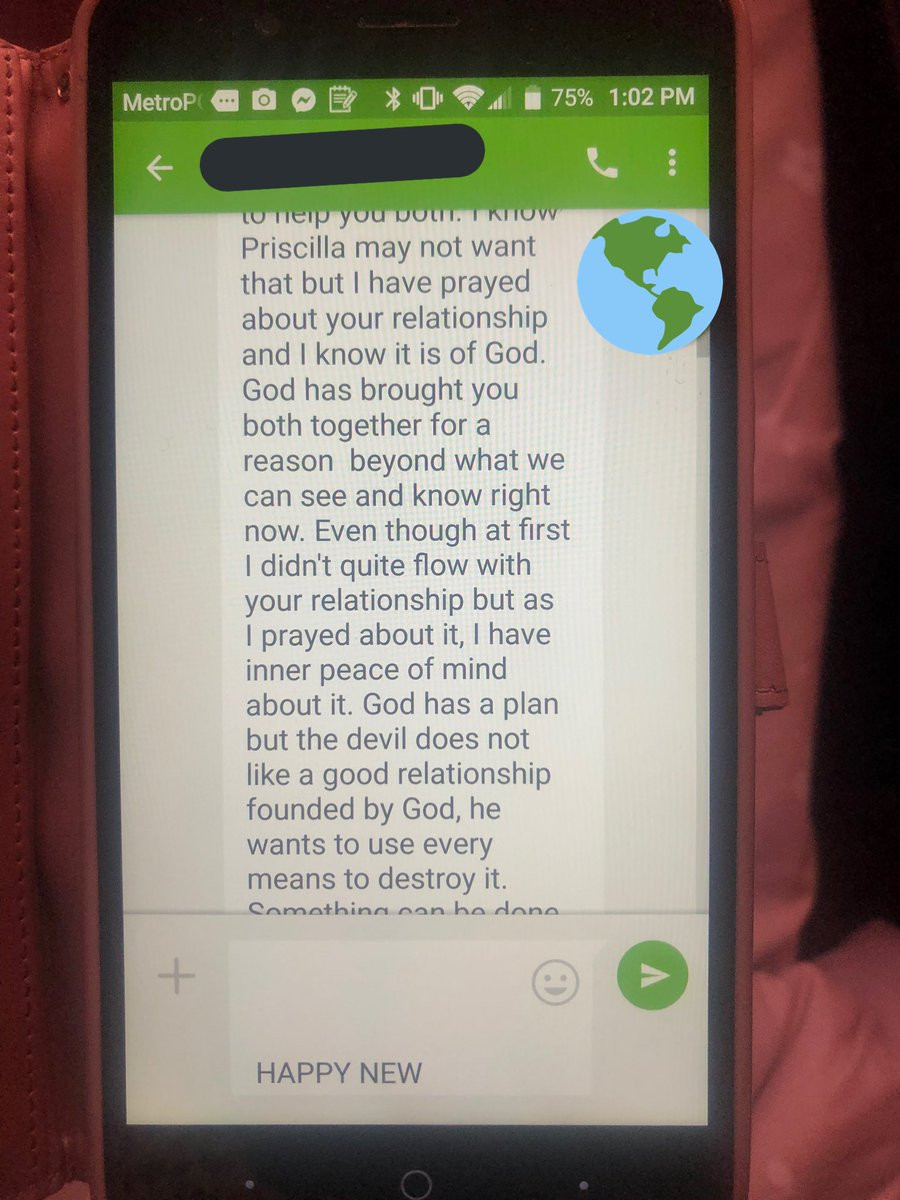 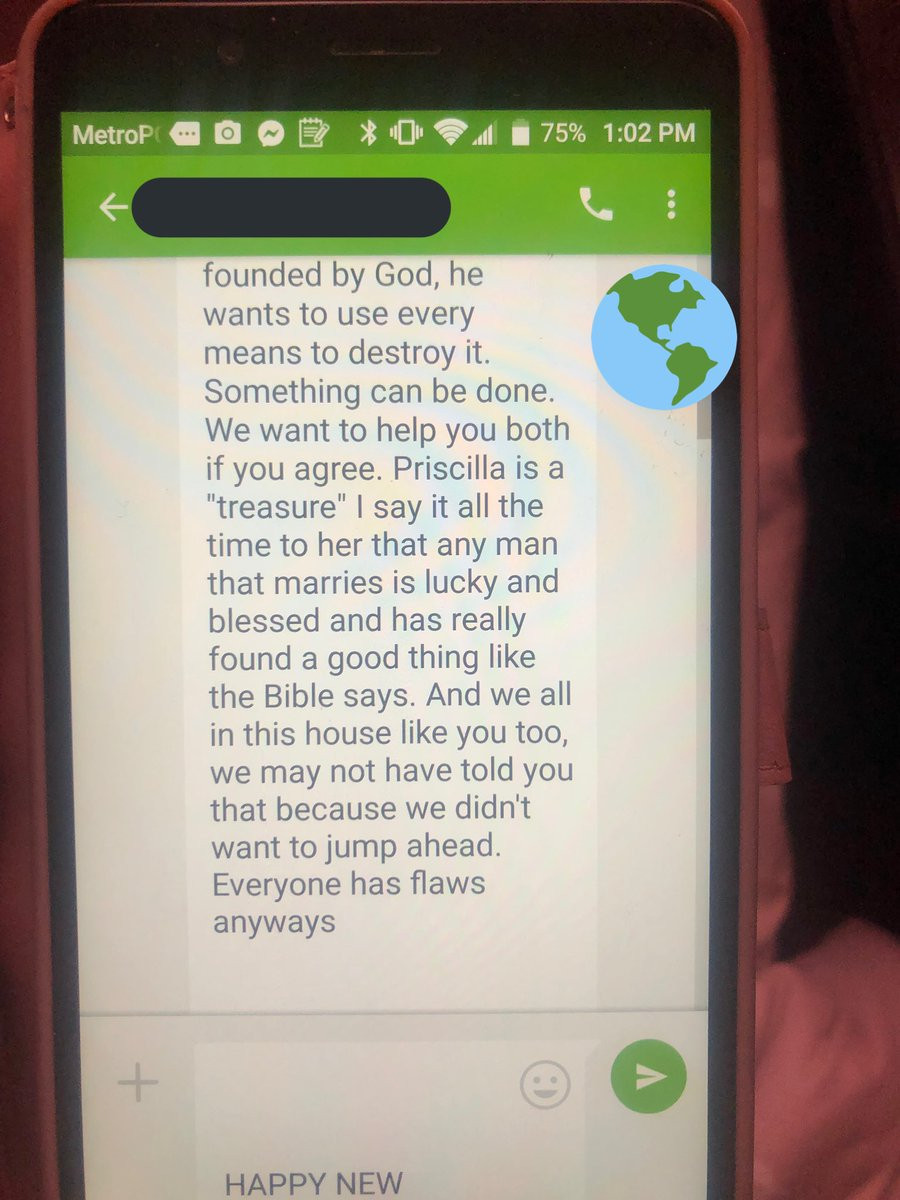 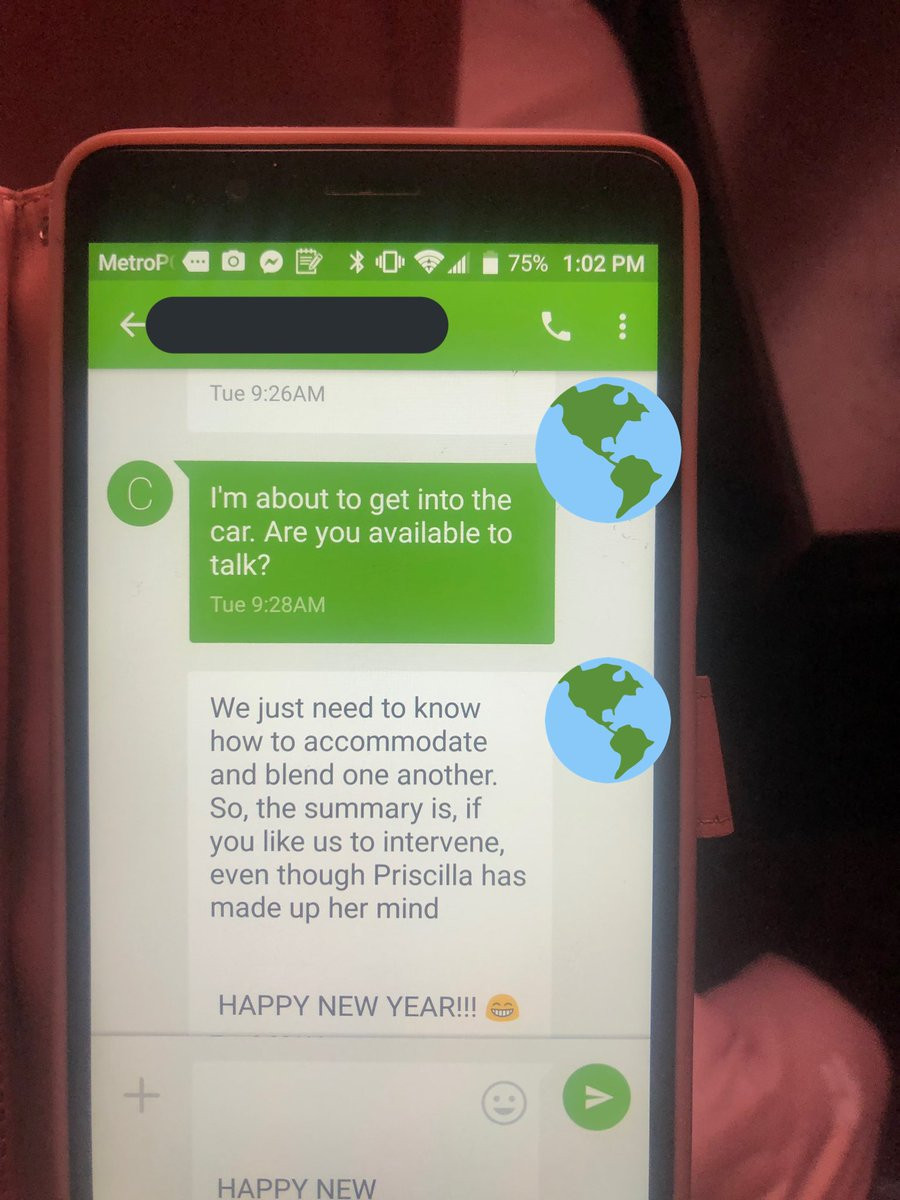 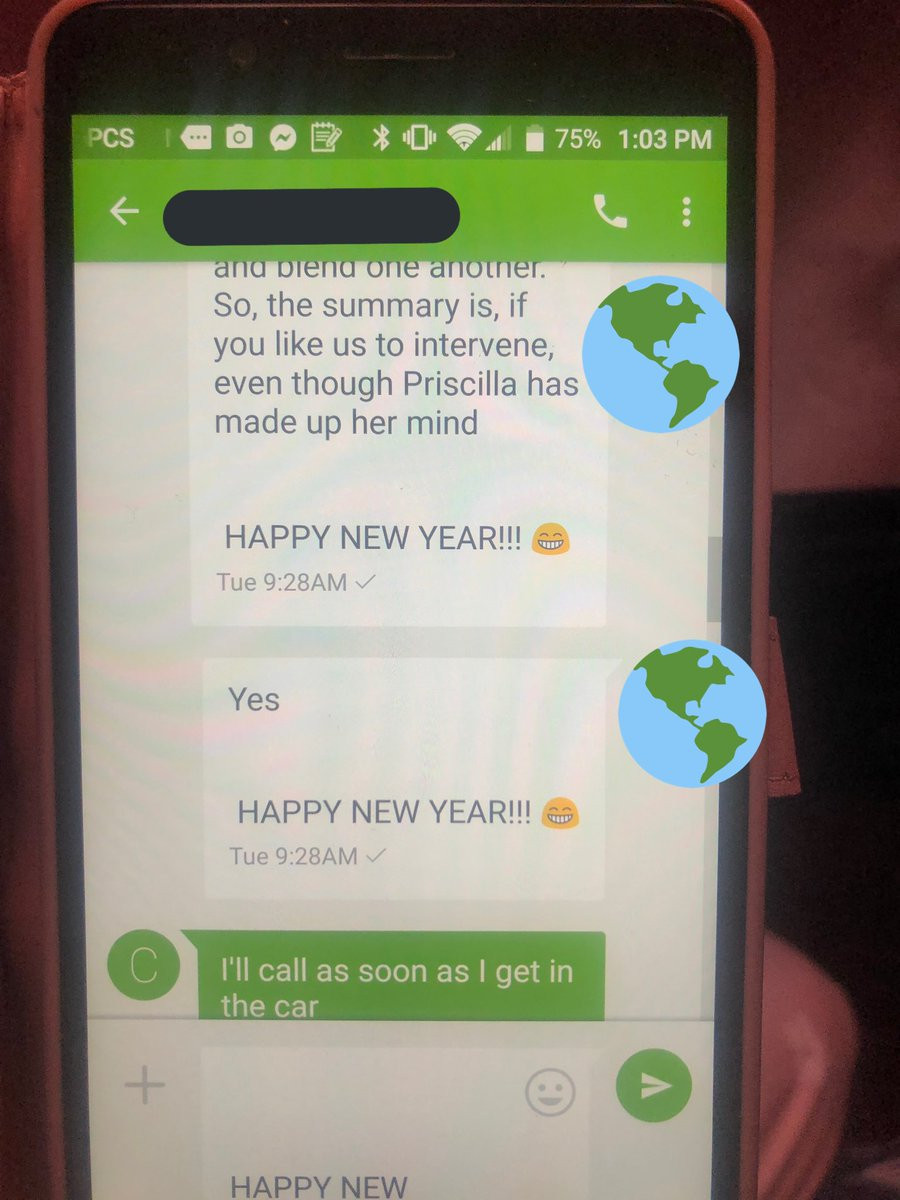 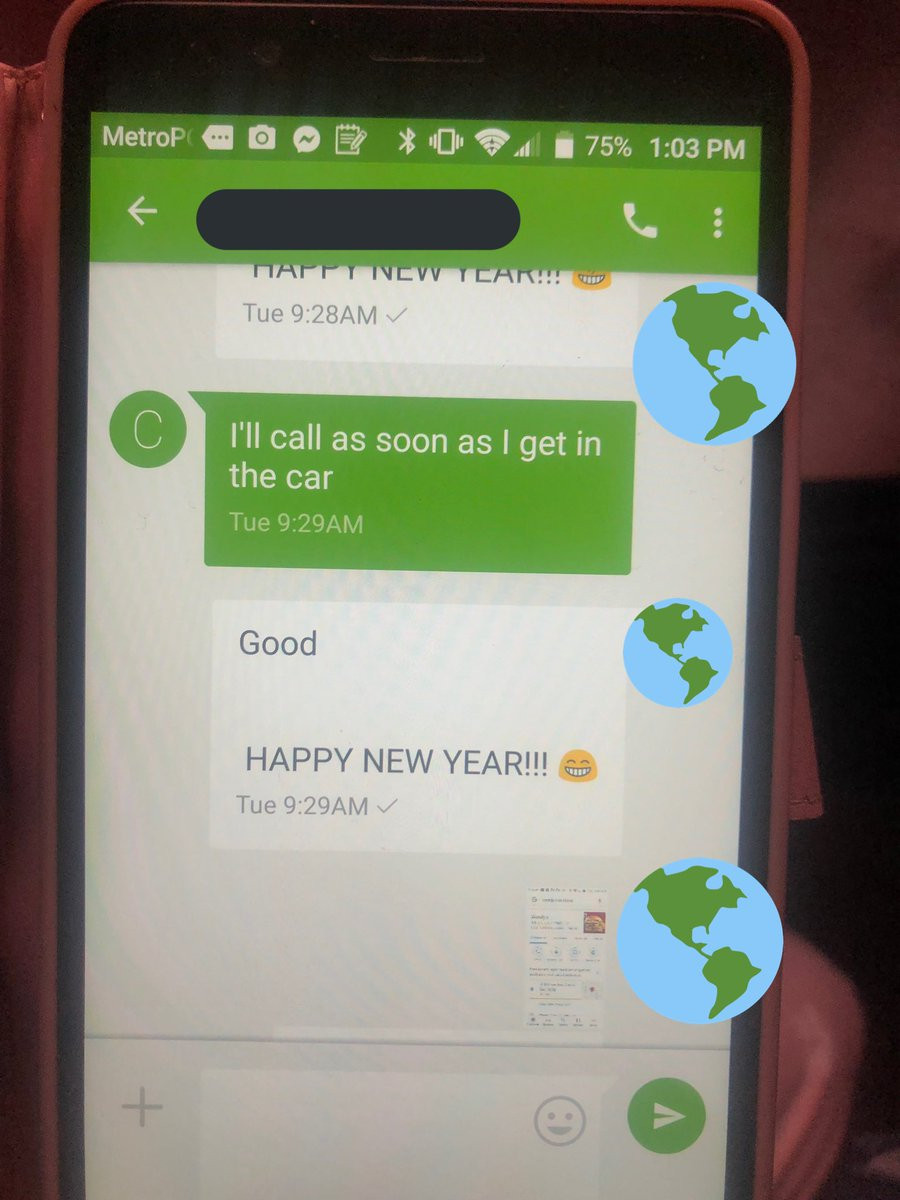