The Oluwo of Iwo, Oba Abdulrasheed Akanbi and his estranged wife Chanel Chin took shots at each other on Instagram, days after their divorce made headlines. It is the first time that the mum-of-one is reacting publicly to the announcement of their divorce which was contained in an official statement released by the monarch last week.

In an Instagram addressed to Oba Akanbi, Chanel disclosed that she is yet to speak out on what she faced in her marriage in the last 4 years out of respect for the stool. She also accused the Oluwo of Iwo of taking up a personal mission to destroy her character with fabricated stories. According to Chanel, this is not the first time her estranged husband will be fabricating stories to publicly destroy someone.

“Maturity speaks. Since The Oluwo of Iwo has gone to the media to air his dirty laundry I have remained silent. He has gone on a personal mission to detsroy my character with fabricated stories, I have remain silent. As a mother of a small baby. All of this is unnecessary and very immature.

Out of respect for the stool, I have not spoken of what I went thru in the last 4 years. Pls let MATURITY Rule.

If a king does not RESPECT himself or his stool….Who else will? People of God.

Let us be honest with ourselves, this is not the 1st or the last time we have watched this individual fabricate and publicly destroy someone…Kings are supposed to uplift and not oppress. “

READ ALSO: Popular Monarch, Oluwo Of Iwo Announces The End Of His Marriage To His Jamaican Wife & Mum-Of-One, Olori Chanel

She also shared another Instagram post in which she declared herself the “Queen Mother of Crowned Prince Oduduwa of IwoLand”.

“Prince Oduduwa is wishing Everyone a Safe and joyous Christmas holiday. Let’s not forget the Reason for the Season.

God is on the Throne. Love and Light to you all 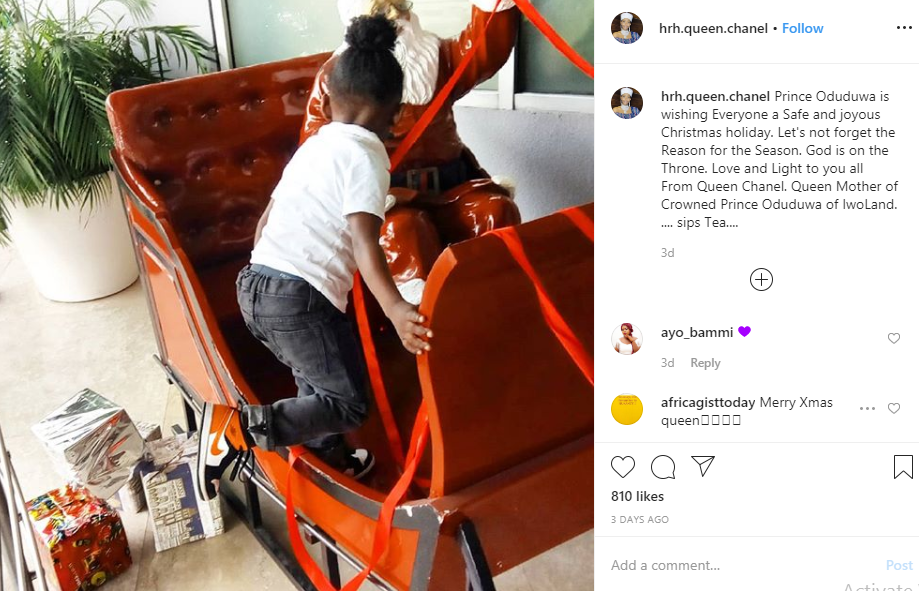 The Oluwo of Iwo in his Instagram post, debunked claims of holding Queen Chanel against her will in Nigeria. A statement released by his Chief Press Secretary, Alli Ibraheem reads;

“THE HORSE IS WAITING BUT YOU CAN’T FORCE THE PASSENGER !!!
To who cares to listen… ticket has been provided since 18th of December, 2019, 5 star hotel fully paid till date of travel !!!

And ask yourself a question….can a Canadian be stranded in Nigeria even if a ticket is not provided ?? the Canadian Embassy and Government is one of the most responsible Government and Embassy in the world.

If someone chooses to stay back for whatsoever reason, its none of our business. The needful has been done by providing the necessary travelling arrangements.”