17-year-old Hafsat, whose newborn was allegedly buried alive by her father in Bauchi has stated that she didn’t know she was pregnant until labor, adding that she cannot remember having sexual intercourse with any man.

The story for st broke about two weeks ago when the Bauchi State Police Command arrested one Bawada Audi, 50, for the murder of his newborn grandchild in Rimin, Zayam Toro Local Government Area of the State. According to the spokesperson of the command, DSP Ahmed Wakili, after Hafsat gave birth to a baby boy, the suspect snatched the child and buried him behind his house. Read previous report Here.

READ ALSO: Justice Finally Served In The Case Of Teenage Mum, Ese Oruru Who Was Forcefully Married To Her Abductor, Yinusa, In 2015

Speaking to Daily Trust, Hafsat claimed she didn’t know she was pregnant as she had been battling with an illness suspected to be mental disorder.

“I was not even aware that I was pregnant because throughout that period, my parents were busy battling to rescue me out of psychiatric challenges from different traditional healers. I spent months on medication in the house of one of the healers,”

“I can’t remember when and how I had a sexual relationship with any man.

When labour started, I thought it was the illness that triggered the blood and pain, which lasted for less than one hour,”

“It was my first experience; and thankfully, I delivered the baby safely alone.

But after he cried for a moment, he went off.

I screamed for help due to the pains. My mother came into the room for my rescue and washed my body, removed the baby from the ground and did other necessary things,”

Hafsat also debunked the report that her father buried the baby alive, claiming that the baby died after delivery.

“The baby remained in coma for over two hours. A neighbor, who is also a local midwife, arrived when she heard that I delivered and checked the baby, but said he was not alive. I feel very bad losing the baby. I was still in pain when the story of its death was broken to me.

“When my father returned home and was also told about the death of the baby, he decided to bury him beside the house fence. He buried the baby without involving anyone,”

“Later, when the story of my delivery and burial of the baby went round, some youths in the village raised the alarm and reported the case to the military formation in Rimin Zayam, alleging that my father buried his grandson alive. But it was not true because the baby died about two hours before I returned home. I want to emphasise that the baby died before my father buried him.

“When the youths reported my father to the military and the police exhumed the baby, they arrested us and dragged us to their divisional headquarters in Toro.

After spending a day, they took me back home and detained my father. I am now in double jeopardy – battling with severe body pain and health challenges.

I don’t have a dime to go to the hospital for medication because the one taking care of my health challenges has been arrested and I have no one to give me money. We don’t have food in the family because the provider is under police custody,”

“My mother is also mentally unstable; it is my father who struggles everyday to feed the family. I am appealing to both government and well-to-do individuals to come to our aid,’’

Hafsat’s mother, Jamila Bawada, corroborated her daughter’s claim, saying that when she entered the room after her daughter screamed for help, the baby was already dead.

“When I checked the baby and discovered that he was not alive, I kept him inside a wrapper and waited for my husband to return.

When he returned, I explained to him that his daughter delivered a baby but it died.

He said there was no need to waste other people’s time, so he buried it within the compound.”

Hafsat’s younger sister, Lubabatu Bwada, 15, also told Daily Trust Saturday that nobody was in the house apart from her sister, to give evidence that the child was born alive.

“My sister delivered the baby alone in our room, so no one else knows what exactly happened.

Nobody can tell the exact condition of the baby at birth.

The story of the alleged burial of the baby alive is fabricated by some hypocrites who raised false alarm.

They insisted that the baby must be exhumed so that my father would be indicted. That story is not true.’

However, the village head of Rimin Zayam, Alhaji Sabo S. Mohammed, who confirmed the incident, said that the suspect is a mentally unstable man.

“Although I did not witness what happened in Bawada’s house, there are two different stories about the incident. One story has it that his daughter delivered the baby lifeless before he buried it, while the other one alleged that he killed the baby and buried it,” Mohammed said.

What I want to tell you is that Bawada is well known as a mentally unstable person in Rimin Zayam. Everybody in the village knows him with mental illness.

He has been seeking medication from traditional healers for many years. His family has tried to take him to a psychiatric hospital but he refused and ran away,

In the process of seeking traditional medication, one day he took his daughter to one of the healers, who told him that it was an evil spirit, not a baby, that hid in her womb.

They believed it was not pregnancy. Even the young woman did not believe she was pregnant, up to the time of delivery.

Subsequently, when the baby was born, he believed it was an evil spirit, so when he returned home and found the situation, he went ahead and buried it.

From there, some members of a human rights group reported the case to security operatives, who arrested him and commenced investigation.

Right now, I and some of his relatives are on our way to the police headquarters in Bauchi to inform them of his mental illness and possibly take him to a psychiatric hospital,’ 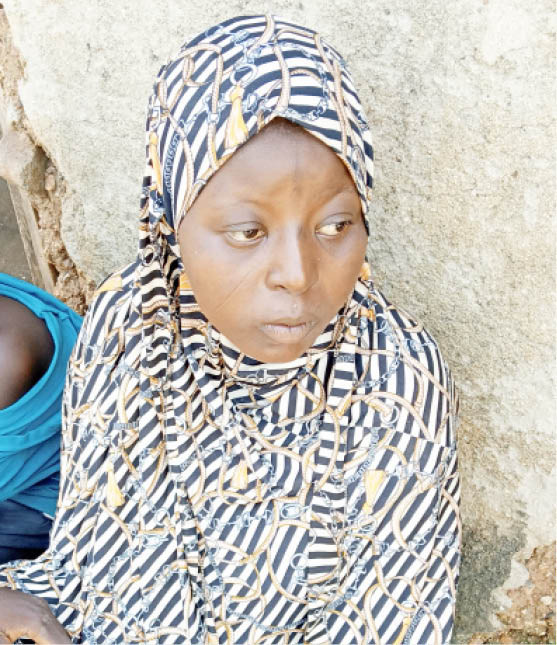