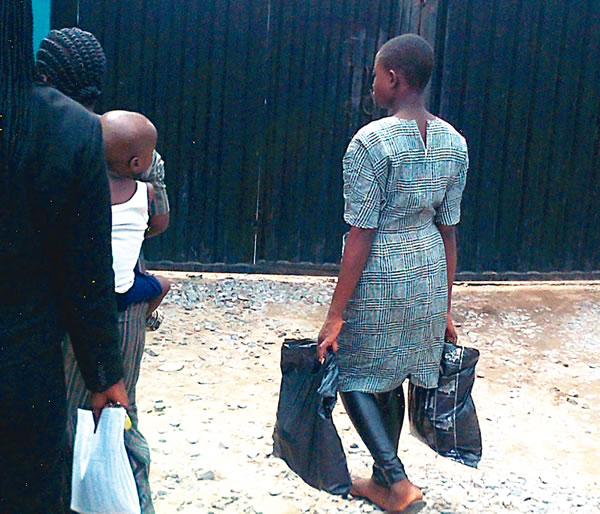 A nurse and a mother of three have been arrested in Lagos state after they were caught while trying to abort a 4-month-old pregnancy for a 12-year-old girl.

According to reports from Punch, a 12-year-old girl, simply identified as Favour, has been rescued by the police in the Mafoluku, Oshodi area of Lagos State, where her aunt, Happiness, and the husband, Johnbull Dike allegedly took her to get rid of her 4-month-old pregnancy.

It was gathered that the innocent young girl had been allegedly raped several times by her aunt’s husband and subsequently became pregnant. After they got to know about her pregnancy in February, they forced her to stay with their trader friend in Mafoluku, to hide their evil deed.

However, after a while the woman was said to have returned Favour to the couple in April, saying she could no longer  afford to take care of her, which made them decide to terminate the pregnancy.

They took Favour to a nurse in Mafoluku, on Wednesday, May 4, to get rid of the pregnancy.

It was learnt that some residents gave a tip-off to a child rights’ group, Child Protection Network, which involved the police. Dike’s wife and the nurse who was caught during the abortion were arrested by the Akinpelu Police Division.

It was also gathered that while the expectant young mum was put in police’s care, a manhunt was launched for Johnbull, a tricycle rider, who fled the area after the police rescued the girl.

According to a worker with the Child Protection Network, Ebenezer Omejalile , where favour’s case was formerly reported, he claimed Favour did not inform her aunt about the rape because Johnbull had allegedly threatened to kill her if she did.

”The case was brought to my attention by a community development committee secretary in Oshodi, Mr. Mamora. The victim was raped and impregnated by her aunt’s husband.

”I went to see the girl at the place where the aunt had taken her with the connivance of a nurse to abort the pregnancy. The girl underwent a scan before the abortion. It was a failed process because she began to bleed at the nurse’s place. The police were informed on that Wednesday and the two women were arrested while Johnbull fled.

”The policemen took Favour to a proper hospital to get rid of the remaining foetus. As it is, the suspect is on the run because he knew that the girl is with the police,” he said.

Still on the matter, Happiness, who said her husband has not called her since the incidence, had been granted bail because her last child had an infection and needed her attention.

She said: ”Our investigation shows that the nurse is a quack. She is not trained and she proceeded to do an abortion for a 12-year-old girl. The suspect’s wife has a two-year-old son who is being treated for an infection. So, she has been granted bail.

”She did not deny that they wanted to abort the pregnancy. The story they painted to the nurse was that the girl was raped by an unidentified hoodlum.”

The Lagos State Police Public Relations Officer, Dolapo Badmos, confirmed the incident, adding that the police were on the trail of Dike.

She said: ”There is a case of defilement against Johnbull. His wife and the nurse have been arrested for aborting a pregnancy. The Commissioner of Police has ordered that the case be transferred to the Gender Unit of the command.

”The suspect is on the run, but efforts are on to arrest him. Meanwhile, the wife and the nurse will both be charged to court.”