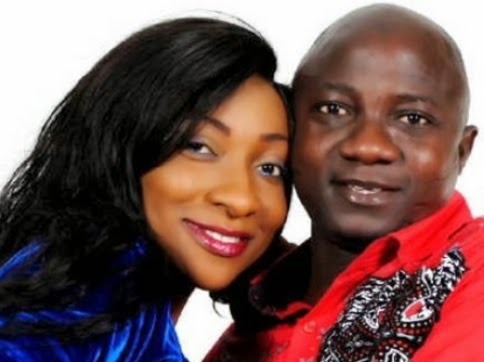 Mo’Cheddah Shares her Near Death Experience + Advice for Asthmatic Patients

Popular Yoruba comic actor, Olaniyi Mikail Afonja, popularly known as Sanyeri, is arguably one of the most sought after actors by movie producers in the Yoruba movie genre right now.

The 42-year-old father of two and his wife of 10 years, Omolara, opened up about their marital experience and many other issues in this new interview with Sunday Scoop.

Read Excerpts from the interview below:

Can you recall how you met you wife?

Sanyeri: I met her in 2004 when I want to screen my movie, Okan Emi, at the National Theatre in Iganmu, Lagos. She came there to have a good time. I sighted her and her friend from afar. I walked up to her friend and told her I liked her friend but she said I should tell her myself. So I went to her and told her I would want us to get closer but she replied that was it because I just shot a movie that made me think I could ask her out. Afterwards, she walked away. After that day, I saw her about a month later and I requested for her number. Even then, it took me a while to convince her to date me.

What attracted you to her?

Sanyeri: People always have an idea of the kind of person they would like to marry. Since my childhood, I had made up my mind that I would marry someone who is taller than me, so that our children would be of good height. So her stature was the first thing that attracted me to her. In the course of dating, I discovered that she is a nice person and we understood each other well. That convinced me that she was a good wife material.

Omolara: Even though it took me a while to accept to date him because of his profession, I was swayed by his persistence. He is a very caring, honest and straightforward person. And he is fun to be with.

Sanyeri: I didn’t even propose with a ring because there was no money then. I just told her I wanted to marry her and I knew she would make her choice whether to marry me or not. The good thing is that she understood me and accepted to be my wife. I used to work more behind the scenes then taking care of set lighting and other technical aspects of production.

Omolara: I believe that our marriage was ordained by God. I knew he wasn’t so buoyant at that time but I felt he was someone who had a bright future and he cared about me. So I decided to give him a try and I am happy for where we are today.

What gave you the conviction that you could sustain a marriage even though you weren’t well-to-do at that time?

Sanyeri: I did not look down on myself that I wouldn’t be able to make it in future. I felt that even though there wasn’t money, we had love that could sustain us.

What was your parents’ reaction to the marriage?

Omolara: They only asked me if I was certain he was my choice and when I answered in the affirmative, they supported me. They asked basic questions like where he is from and his family background. They also asked if I was sure he wouldn’t dump me when he became buoyant in future. At the end of the day, they were convinced and they didn’t say anything negative about our union.

How easy was it for you to adjust as a married couple? 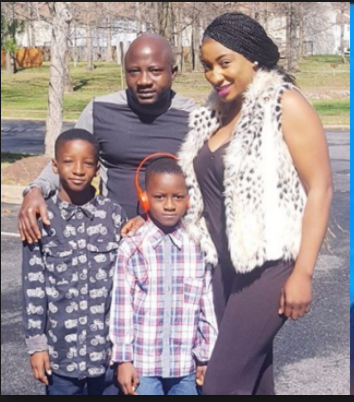 Sanyeri: There was no big deal about that because I’ve always been a homely person even though I was on the street hustling. I always spent my free time with my wife and we blended with each other well. Even when I became popular, I still maintained my lifestyle.

Omolara: Just like he said, he is somebody who is usually at home whenever he is not on set. We were able to adjust well as a married couple because we already understood ourselves even while dating.

How would you describe your marital experience?

Sanyeri: Anybody who says that his or her marriage is always smooth is not being truthful. There will always be ups and downs. In our case, we complement each other because of the understanding between us. She corrects me whenever I do anything wrong and she doesn’t even see me as a star. She tells me that it is Niyi she married, not Sanyeri. I also correct her when the occasion calls for it.

Omolara: It has been a good experience so far. As is to be expected, we fight and we also settle between ourselves. We don’t take our issues to a third party because I don’t like that at all.

How would you describe your individual personalities?

Sanyeri: My wife likes to attend comedy shows because she loves to laugh. She is even more cheerful than I am. And at times, when I get too serious or if I’m lost in thought, she would cheer me up and tell me to calm down. She likes being around people, whether young or old.

Omolara: My husband’s character is different from what people see in films. Even though he has a sense of humour, he is also someone that likes to be alone sometimes so he can think deeply. It’s not like he laughs all the time and he doesn’t talk too much. He also takes care of his family and likes moving with responsible people.

How do you settle disagreements?

Sanyeri: It is very important to understand the people close to you, even if you are not married. People always have specific times that they are receptive to correction and advice. Sometimes, it could be in the middle of the night that I would call her and bare my mind. I would make some things which she didn’t know about me before known to her.

Omolara: We settle our disagreements by ourselves. Whenever I offend him, I apologise and he also apologises whenever he offends me. I don’t hesitate to tell him the truth as I believe I’m the closest person to him who can do that. And I also implore him to call me to order whenever I do something wrong instead of telling outsiders. I don’t see him as a star but as my husband and I know how to broach certain issues with him.

Can you recall the first major disagreement you had as a married couple?

Omolara: Honestly, I cannot remember because it was a long time ago. Besides, whenever we have issues, we settle it and move on.

A lot of marriages don’t stand the test of time these days, what do you think is responsible for this?

Sanyeri: If your marriage lasts, it is by the grace of God. One also has to be very tolerating. Marriage is not easy. If anybody tells you otherwise, maybe the person is staying outside the country and his spouse is in Nigeria. But if they see themselves every day, there would always be friction. Even siblings who live together quarrel.

Omolara: Marriage is the coming together of two people from different backgrounds. They would have different ways of doing things so one has to be patient and understanding.

What is the importance of money in the success of a marriage?

Sanyeri: Money is very good and important. Most marriages that crash are caused by failed responsibilities. When one party cannot fulfill responsibilities, there would be problem in the marriage. There are some men who don’t give their wives money at home but they prefer to entice other people’s wives. I consider men like that to be senseless. I have always had it as my personal philosophy that I can never date a married woman. And I don’t pray for anyone to date my wife too. If you take care of your wife, you would have the confidence to correct her whenever she does anything wrong.

Omolara: Money is very vital because you would need to take care of the needs of your family. Some men don’t spend money on their wives and families but they prefer to go outside and spend money lavishly. That is not good enough.

How do you cope when your husband has to go on set for several days or weeks?

Omolara: I have known his profession since we were dating, so it’s not something new to me. He always tells me about his movement and he lets me know beforehand when he would be going to location. And whenever he is not on set, he would be with his family at home.

How has parenting impacted on your relationship?

Sanyeri: I pray God would give us all good children. I like it when my children are doing well and I always give them necessary advice about life. I don’t usually beat them, so when I do that, they must have done something serious.

Omolara: I spend more time with the kids so I know their individual personalities and I know how to relate with them. I correct and discipline them when needed.

How do you celebrate your wedding anniversaries?

Sanyeri: If we are in Nigeria, we would go to hotels and spend some days all by ourselves. And if we are abroad, we go to some fun places.

How do you relax as a couple?

Sanyeri: I usually make out time to relax with my wife. On occasions like that, we would travel out of the country and enjoy ourselves.

What are the most memorable moments of your marriage?

Sanyeri: I always remember those times that we didn’t have much and she stuck by me. When my wife gave birth to our first child, I had just N3, 500 with me, so it was quite tough. That’s why I always say that there is nothing I cannot give my wife. As of the time she married me, the only property I had was my tribal mark.

Do you buy gifts for each other?

Sanyeri: Yes and not just on special occasions. Anytime I travel and see fine clothes, I always buy for my wife. And the dress I buy for her often fits her more than the one she buys for herself. She also buys me gifts.

What advice do you have for young couples?

Sanyeri: We could not have a wedding anniversary celebrating until six years after we had been living together as husband and wife. And what I’m trying to say is that my wife stayed with me, right from when there was nothing.

My advice for young girls is that they should not discard suitors, just because the person is not rich. So far the person has potential and focus, take the risk and stick with him. There are some people who started off as rich but became poor over time. Nothing lasts forever.