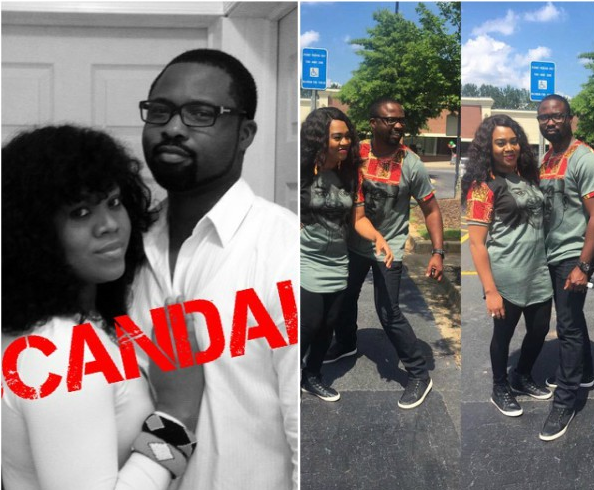 Nollywood actress, Stella Damasus who has been living in United States of America with her family, reacts to an Instagram post by her husband, Daniel Ademinokan, telling her how much he misses her.

Daniel affectionately expresses his desire for Stella to hurry back home. The post also hints that he probably suffered from mental abuse in a previous relationship.

The actress now singer who has been married three thrice, had two girls for first husband, Jaiye Aboderin who died in 2004.

READ ALSO:Did Daniel Ademinokan Just Confirm that He is MARRIED to Stella Damasus?

The lovely mother of two seems to have moved on from her past, and is enjoying every bit of her marriage with Daniel.

The stunning actress responds to her hubby’s post with equally romantic words and reveals that as much as people mock her for being married thrice, being with him makes it worth it.

Stella says she cannot wait to be back home with him too. She writes:

“@dabishop007 honey, words cannot express how you have made me feel. When people laughed at me and called me names, saying I have been married three times; it hurt me but in my heart I knew it was worth it.

Taking a chance on love again was risky for me but only God knows how many nights I cried and told him if it was not meant to be he should close the chapter. When I met you I found a friend, a father, a brother, a confidant and a business partner.

I didn’t know God had plans for me. Plans that were better Than the ones I actually prayed for. Thank you for coming into our lives. You are the most romantic, appreciative, kind, loving, caring and understanding husband any woman can ask for.

READ ALSO: Stella Damasus Gives Epic Response to Internet Trolls Who Called Her Out for Wishing Her Husband’s Son a Happy Birthday

You also helped me through my healing process boo. The girls love you so much for being an amazing dad and friend. I dey come back in two days o, tell shakiratu and the rest say the owner of your salt na kolo o, make dem travel far go find their own.

I be one man army o, make dem no try me. When I get better thing, I dey hold am TIGHT. I no dey take am play football lie lie. I love you boo. See you soon.”