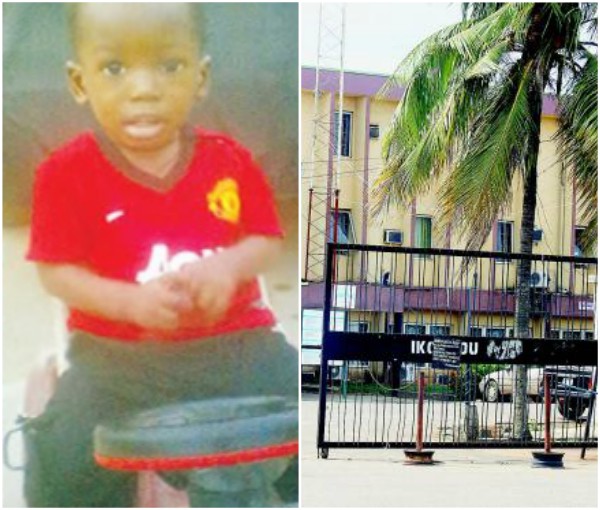 The sudden death of sick 2-year-old Christopher Mike-Ozugha, has been blamed on the  nonchalant attitude of some medical workers at the Ikorodu General Hospital, Lagos State, by his Parents.

According to Punch, Esther and Emmanuel Mike-Ozugha claimed that their only child was taken to the hospital because he had difficulty in breathing.

According to the couple, the oxygen tank their son was placed on ran out of oxygen within 30 minutes.

They said it was late by the time the oversight was discovered, as the little boy eventually died.

READ ALSO: #Justice4Chisom: Pathetic Story of How Mum of Two Died During Childbirth at Due to Negligent Lagos Hospital

But the general hospital denied the report claiming the child had severe bronchopneumonia and malaria, which killed him.

”When I was in the office on Thursday, my sister called me that Christopher was running temperature again. I rushed back home and took him to a midwife in Irawo, Ikorodu. She checked his temperature and gave him anti-malaria drugs, but there was no improvement.

On Friday, we took him to Olive Clime Hospital and a doctor at the private hospital ran a test on him. He gave us paracetamol, antibiotics, and anti-malaria drugs. The test came out on Saturday evening and my baby’s temperature was still high. The doctor said he did not have bacteria or infection and said he would continue with the anti-malaria treatment.

That Saturday night, I noticed my child was dizzy, but the doctor said it was due to some medications he took. He said he would be fine.”

Explaining further, Esther stated that the doctor told her and her husband around 11pm that their son’s breathing was abnormal and referred him to the Gbagada General Hospital.

She said they took the boy to the Ikorodu General Hospital because the former was far from them.

”He could walk and talk at that time we got to the hospital around 1am. They started complaining that why did we go to a private hospital and come to them when things were getting out of hands? A doctor told one of the nurses to prepare oxygen for Chris.

The nurse said the oxygen tank they had was not working and that we should not disturb her. Later, another nurse came and I begged her. She followed me to the Accident and Emergency Ward, where we got an oxygen tank. .

After 30 minutes, the nurse came back to check and said there was no oxygen in the tank. She quickly connected him to the central oxygen. After some minutes, it started blinking and I rushed to call the first nurse.

Later, the second nurse said the degree of the oxygen was low. By that time, my baby was no longer responding. Something was coming out of his mouth.”

Christopher’s father who corroborated his wife’s account, said their child died around 11am.

”I am a Christian; I leave vengeance to God. Actually, it (the death) was due to the hospital’s negligence. They brought an oxygen tank without oxygen and put the pipes in his nose without connecting the other ends to the oxygen tank.

When I waited for the nurse to fix it and she didn’t show up, I removed the pipes so that he could breathe normal air.

To my greatest surprise, the doctor that came to examine him instead of fixing the fault, kicked the pipes away. He only touched the baby and left.

A nurse said I was wasting the oxygen. She turned on the tank knob, but nothing came out. She said it was not working. She called a technician that brought it.”

He alleged that the man left in anger after regulating the flow to a certain degree.

READ ALSO: Facebook User Shares Story of Medical Cruelty that Claims the Life of New Mum a Day After Having Twins

”I put the pipes back into his nose. The nurse that was on night duty came and discovered that there was no oxygen in the tank. She then connected him to the central oxygen till daybreak.

”They took him to the emergency ward and he was to be placed on the central oxygen, which was not coming out. They had to call for help to get it fixed, and that lasted for about 10 minutes. Before I knew it, my son’s chest had swollen. That was when I knew he was gone,” he added.

However, a senior official at the hospital described the allegation that the oxygen tank was faulty and short of oxygen as false, adding that investigation had commenced on the alleged nonchalant attitude of the first nurse.

”The boy was diagnosed with severe bronchopneumonia and severe malaria. He had high fever and difficulty in breathing and was vomiting. When a doctor examined him, he was drowsy in a semi-unconscious state and treatment was commenced.

For four days, the parents were going from home to the hospital. The patient was referred on the 5th day when his condition had deteriorated to the Gbagada Hospital, but the parents decided to bring him here.

Ikorodu General Hospital does not charge for oxygen and it is always available in the hospital. In fact, oxygen was supplied on Saturday, August 19, and the patient came in early Sunday morning. So, there couldn’t be any issue of supply and it is not true that the oxygen tank was empty.

We operate central oxygen that is available at every bed. In situations where beds or all the oxygen points have been occupied, we resort to oxygen concentrators, which are as good as the central oxygen.”

”I picked up the symptoms of bronchopneumonia at the point when the child could be saved. To clear the record, the child was conscious when they left and his temperature had come down.

Between the time of the referral and the time they got to the general hospital, anything could have happened. I called a cab driver to carry them so that they got to where they were going on time.

I referred them to the Gbagada General Hospital initially because I thought the security situation in Ikorodu might not make it easy for the driver to get there. The driver said he could go there and of course they can go to any general hospital with the referral.”