Lately the well known General Overseer of the Redeemed Christian Church of God, Pastor Enoch Adeboye, and his wife of 50 years, Foluke Adeboye have been giving us serious couple goals.

Recently, the highly celebrated pair were pictured kissing at the Church’s event. 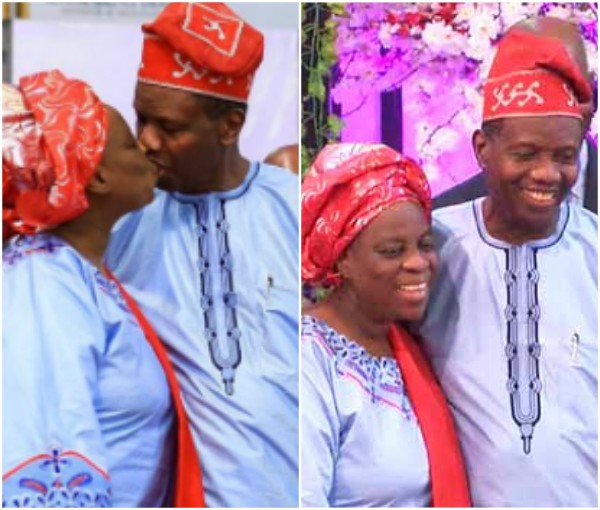 READ ALSO: 12 Ways to Say I Love You in a Marriage

Last month, while preaching at the National Headquarters of RCCG, Throne of Grace Parish, Ebutte Metta, Lagos, the popular cleric expressed profound love for his wife.

He was quoted saying, though he can’t do anything to anybody who slaps, criticizes or lies against him, but to do such against his wife, he would kill the person.

The man of God however enjoined couples to be ready to lay down their lives for their partner if they truly loved them.

Just yesterday, Mrs Adeboye surprised many with the way she gushed about him too on Twitter. The 69-year-old mother of three shared a photo of her husband on her official Twitter with a heartfelt caption:

READ ALSO: Pastor Enoch Adeboye’s Declaration of Love and Thanks For His Wife

”Just take a look at my #MCM and #MCE. I am a blessed woman. #MansTooHot.” 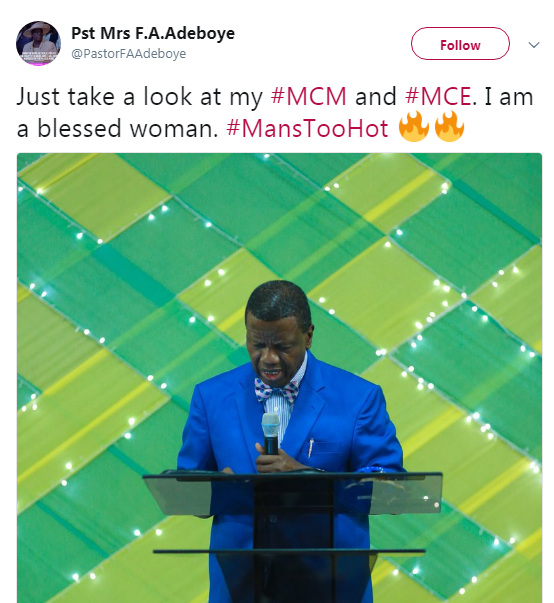 Still on his message about killing anyone who dares touch his wife, Pastor Adeboye said that he would not do the killing with knife or gun but will ask his Daddy above and the person will sleep and not wake up again.

”Be ready to lay down your life for your partner if you’re truly in love. My wife doesn’t like me saying this: “You can slap me; you can lie against me, you can criticize me, it doesn’t bother me, but touch my wife, I’ll kill you!

I want the world to hear. They’ll say if I killed, they’ll arrest me, jail me, that is if I killed with cutlass or gun. If you tamper with my wife, I will talk to my Daddy and you’ll sleep and will not wake.

If you want to marry a person who’s influential, marry a pastor. If he does not fall into sin, he’ll remain a pastor forever. Marry for love. It’ll endure. I’ve been married for 50 years and still on honeymoon. I was the poorest among those lurking around the girl I married.

One was a lawyer who had a car; I had nothing. But I told the girl that if you marry me, whatever I am, wherever I ever become, will be yours.

After our wedding in September 8, 1967, we faced challenges. The baby came 1968. It was tough. We were happy because we were in love.

I had no car, no house, a marriage into a rented room and a parlour. We have stories to tell. If you marry for love, the reason it will last is because God is love.

You must continue to tend the fire, meaning: no matter how little, you must constantly give gifts to your partner. If it’s given in love, it’ll be appreciated.

When two people are in love, they exchange gifts. Always open your mouth to say to your partner “I love you”.”