Female Drummer and Mom, Ara, Opens up on the Lessons Learnt From Her Mom About Loving a Man

Theresa Kachindamoto is a mother of five. She is a chief in Malawi, overseeing almost 1 million people, and she is rapidly becoming one of the greatest threats to child marriage in the country.

Theresa has used her position as a community chief to ensure an end to child marriage. Her dedicated passion towards the cause is a reason why she is dubbed the “Marriage Terminator”.

13 years ago, the community influencer quit a 27-year-old job as a secretary at a school located in Zomba, a southern Malawi district. 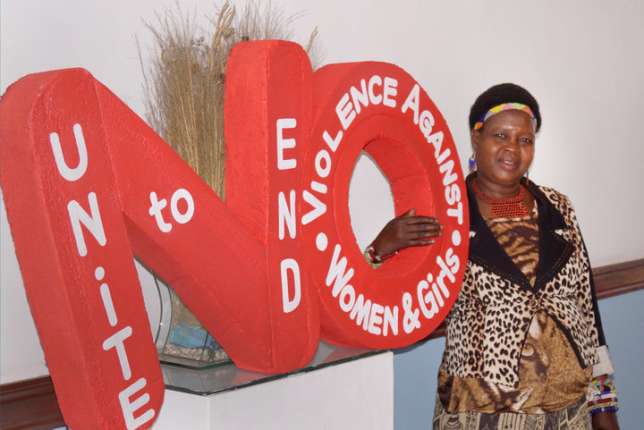 The youngest of 12 children, she was born into a family of chiefs — Malawi’s traditional authority figures — but she never expected to become a senior chief to more than 900,000 people. But when the chiefs called, telling her to pack her bags and come home, she did. She had been chosen as the next senior chief.

She was shocked when she saw girls as young as 12 with babies and teenage husbands, and after her coronation rites, she was soon ordering the people to give up their ways and terminating underaged marriages.

A 2012 United Nations survey found that more than half of Malawi’s girls were married before the age of 18, especially in rural areas where parents are eager to get girls out of the house to ease their financial burden. It ranked Malawi 8th out of 20 countries thought to have the highest child-marriage rates in the world. Last year, Malawi’s parliament passed a law forbidding marriage before the age of 18. But under the customary law of the traditional authorities, and the constitution, Malawian children can still marry with parental consent.

Early marriage wasn’t the only practice Chief Kachindamoto was against, she also banned sexual initiation rights and sexual camps. In these rural areas, parents also send their underaged children (as young as age 7) bound for marriage away to camps for “kusasa fumbi” – which means cleansing.

Reportedly, at these sexual initiation camps, the girls are taught ‘how to please men’ by performing titillating dances and sex acts.

Reports also reveal that some children “graduate” only by having sex with the teacher. Others return home untouched, only to be preyed on by a local “hyena” — men hired by parents to take their girls’ virginity — or by prospective husbands to impregnate them.

In a country where one in 10 people have HIV, these rites of passage — which rarely involve the use condoms — are sentencing girls to a lifetime of trauma, and, in some cases, early death.

One in five Malawian girls is a victim of sexual violence, as is one in seven boys, according to the UN Children’s Fund, UNICEF. And a lot of Malawian traditions promote sexual abuse within the family. If a girl’s aunt or older sister falls sick, she can be sent to look after the household, and in some cases will be expected to have sex with her uncle or step-brother.

Chief Kachindamoto has faced a lot of pushback. Many parents did not want to hear her pleas to keep their girls in school or her assurances that an educated girl would bring them a greater fortune.

The common response was that she had no right to overturn tradition, nor, as the mother of five boys, to lecture others on the upbringing of girls.

Realising that she couldn’t change the traditionally set mentality of parents, Kachindamoto instead changed the law, by getting her 50 sub-chiefs to sign an agreement to abolish early marriage under the customary law and annul any existing unions in her area of authority.

And when she learned that child marriages were still taking place in some areas, she fired four male chiefs responsible for these areas. They returned months later to tell her that all marriages had been undone.

After sending people to verify this, she hired the chiefs back. She then drew community members, the clergy, local committees and charities together to pass a bylaw that banned early marriage under the civil law.

Over the past four years, Kachindamoto has broken up more than 850 marriages and sent all of the children involved back to school. She often pays for, or finds other sponsors to pay for, the schooling of girls whose parents cannot afford to pay school fees.

We are proud of her!