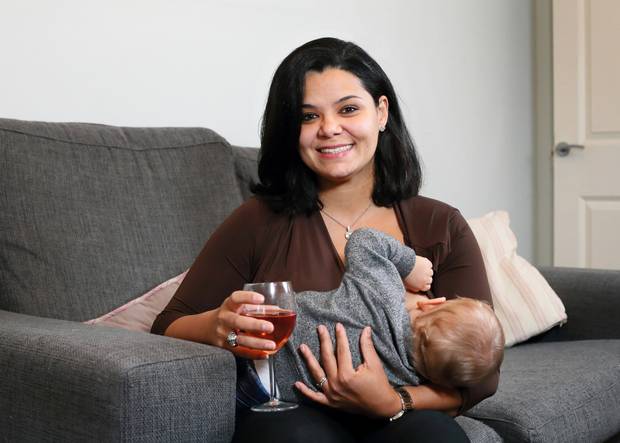 Chrissy Teigen Shows Off Her Post-Pregnancy Photos With These Words

Are you a breastfeeding mom, or “a preparing to start breastfeeding” mom? Do you love your glass of wine? Do you drink it occasionally or routinely? You may want to drop that glass of wine, and read this explicit news.

Alcohol is not safe while breastfeeding!

New moms, it’s not time for a glass of wine just yet: New research suggests it might be best if you would wait because of your baby’s brain.

The researchers analyzed more than 5,000 mothers and babies, born in 2004, from Australia. They were assessed every two years and the findings were published in the journal Pediatrics. Exposure to alcohol in breast milk was linked to a reduction in thinking and reasoning skills when kids were tested at ages 6 and 7 Dailymail reports.

“The more alcohol women drank, or the riskier their drinking patterns, binge drinking while breast-feeding, then the lower the child’s abstract reasoning ability at age 6 to 7 years,” said study author Louisa Gibson, a doctoral student in neuropsychology at Macquarie University in Sydney.

However, Gibson said there was no decline in thinking and reasoning skills seen in children of mothers who consumed alcohol but didn’t breast-feed.

“This lack of association in babies who had never been breast-fed suggests that the reduction in [thinking and reasoning] abilities was a direct result of the alcohol in the breast milk, and not because of other social aspects related to drinking,” she explained.

Dr. Michael Grosso, chair of pediatrics at Northwell Health’s Huntington Hospital in Huntington, N.Y., said the findings should still be interpreted cautiously, “as the association between the risk factor and the outcome may be the result of something unmeasured.”

Still, he said, avoiding alcohol while breast-feeding is likely the safest option for babies. Gibson agreed.

“The safest option is to abstain from alcohol completely during both pregnancy and breast-feeding. This study suggests that there is no safe level of alcohol consumption, with every extra drink causing a little bit more harm,” she said.

The findings further suggest such children’s thinking and reasoning skills are no longer affected by the time they turn 10, as well as implying that smoking while breastfeeding does not impact children’s cognitive abilities.

“The human brain is an extremely active organ in both prenatal and early postnatal life,” he said. “The take-home message is quite clear: Do not smoke and avoid alcohol while breast-feeding,” Marino said.

Breastfeeding reduces women’s risk of pain after a C-section

Mothers who breastfeed for at least two months after a C-section are three times less likely to experience persistent pain than those who do so for a shorter period of time, the study by Our Lady of Valme hospital, Seville, postulated.

Anxiety significantly increases a woman’s risk of suffering discomfort after the operation, the study also revealed.