Sexual harassment occurs when one employee makes continued, unwelcome sexual advances, requests for sexual favors, and other verbal or physical conduct of a sexual nature to another employee against his or her wishes.

Damning statistics reveal the degree to which women are subjected to sexual harassment at work, unconfined by geography or a specific industry. The harasser can be the employee’s boss, supervisor, manager, customer, coworker, supplier, peer, or vendor.

In light of this, some Nigerian women took to a thread on Twitter to narrate their experiences of sexual harassment and assault at their workplace.

It all began after a female Twitter user, Mocha@raychellered asked women to share their experiences following the naked protest done by Gugu Ncube on Wednesday.

Gugu, a Zimbabwean woman, staged an emotional one-woman protest outside the Union Buildings in Pretoria on Wednesday, claiming that she was forced to quit her job at the University of South Africa (Unisa) after allegedly being raped by a colleague.

Her decision to go nude was, in her words, because “she had been stripped of her dignity”. She was arrested for the nude protest.

Read some of their personal experiences below…

One of the OGA’s in the office, he tried on the phone and he refused to give up after I declined, still asking to come see him in his hotel room, I cannot report him no evidence, even if I do, am just serving Corp member there.

Colleague who’d kept asking me out a date left a gift box at my desk, it was lingerie. I was told “you’re too set/you carry o/your husband dey climb that thing dey enjoy/I know you will be sweet on bed” etc. and when I balked was told is just “compliments”
A supervisor asked for my opinion on a mobile app we’d been working on, gave me his phone, it was a porn playing. App hadn’t been downloaded on the phone A colleague kept trying to hug me, when I made it clear I didn’t want to be touched, he started rumors I slept with the boss.

My supervisor at my IT workplace was always passing lewd comments at me. The day I finished and went to give him a copy of my work, he grabbed me and forcefully kissed me. I reported him and a week later my work was rejected. Still got published tho, so in their faces.

I work in law enforcement. This happens all the time. The worst part is that you are not expected to react or report as it is a regimented space and as such one should not show emotion.

“Looking at your hips, you wear size 12 or 14 right?” *tries to spin me around* – church leader A pastor tried to kiss me once also. A lecturer insisted I sleep with/date him or I won’t graduate, I got an extra semester. Can’t even delve into workplace harassment.

READ ALSO: For Speaking Up In The Face Of Sexual Harassment, See The Injustice Done To Princess Alora
Zainab@zizzycarter

Oh yes. My boss at my first internship tried on couple occasions to kiss me. Then he’d asked me to sit on his legs (sometimes actually pulling me to himself) while telling me about his daughter that was my age. I was 17.

I turned down close to 3 jobs because of this, couldn’t even tell anyone, – “Your breast her well packaged, if you want me to help you, help me”. packaged lai se hamper. – “you were looking so sweet today, if I catch you lasan, I can rape you” nobody told me, to cut him off.

I experienced this at my former job, this guy will look at you and lick his lips. Then he will say your husband is enjoying o, see what he’s eating alone. Or he will purposely brush your breast or rub his dick against you. And everyone says he’s just joking.
At my former job, our CEO who doubled as pastor was a pervert. Constantly talking about yellow laps, yellow breasts, are you celibate? Hope your boyfriend is not a born again from the waist up?

I also felt like if I told someone they would immediately ask what I had done to warrant him doing that and that he was somehow doing it because of a vibe I sent out. He apologized but I had to work with him everyday and it forever changed my perception of him and sexual assault.

I had a coworker that I was just getting cool with and establishing a relationship with (we had common friends and were both black in a field with very few black people) send me a dick picture with him sitting on the toilet after an innocent conversation. I felt so dirty. 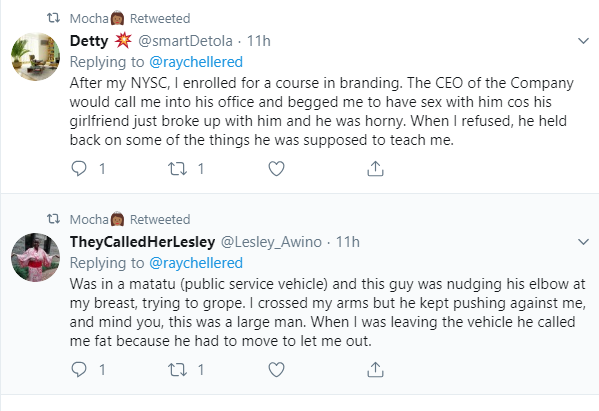 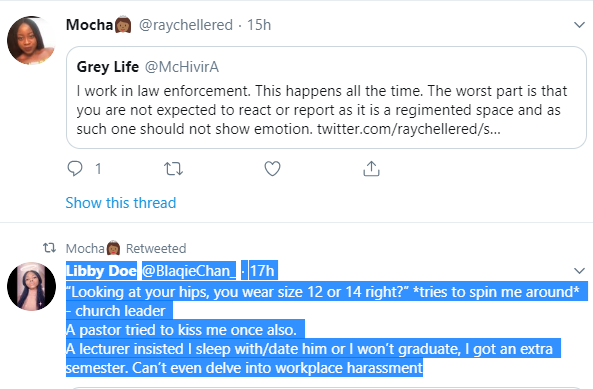 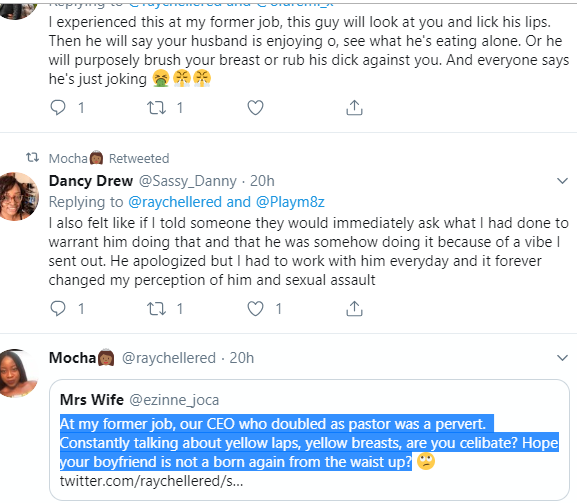