A Nigerian Food Connoisseur, Samuel Otigba, has shared his horrific sexual abuse story as a child to campaign against sexual assault against men. Child sexual abuse is real and the abusers are mostly people who are closest to us. Most of the time, we hear of the girl-child being sexually abused while we think the boy-child can defend himself or can’t fall victim.

Samuel went on to reveal that his virginity was taken by force, causing him to hate women while growing up. He further disclosed that he battled PTSD (Post-traumatic stress disorder) as a result of the abuses.

”If all young boys under 15 years old were interviewed, and all men decide to openly talk about their childhood; it would be tears and pain. Because many aunties, housemaids, female family friends, older female family members are all rapists, monsters, abusers and sex offenders.”

#NotaVictim any longer. I understand empathy, love & forgiveness, “cause the worse kind of victim is one who makes victim of another”.

#NotaVictim any longer. I understand empathy, love & forgiveness, “cause the worse kind of victim is one who makes victim of another”

Finally gave her an answer last year, my mum cried so much, she blamed herself for everything, wish she never left us at home for church, how did she miss the signs? Explained she wasn’t to be blamed for others mistakes. NCF helped, Found God, got healed.

SEE ALSO: “Pay attention to the boy-child too” – Man, Abolaji Dairo, Who Was Sexually Abused By Maid At Age 7, Writes About The Bitter Experience

I’m whole but sometimes the after effects of surviving abuse surface:

Kidnapped At 21, Married To Boko Haram Commander And Rescued: Mum, Aisha Yerima, 30, Tells Startling Story About Why She Returned To Her Abductors

8. Mood swings Relics of abuse will always be there.

I see a lot of men saying “i enjoyed it”. That’s a coping mechanism bro, the damage is alive in your subconscious but you don’t know till you make victim of others. Why most men rape & why some men don’t value women except sexually motivated.”

SEE ALSO: Nigerian Dad, Abolaji Dairo, Shares More Details Of How He Was Sexually Abused By Their Maid At Age 7

Parents, we need to pay attention to the boy child too. One of the male victims of sexual abuse once said that parents should watch out for their boy child’s compulsive behavior, his sudden mood swings… which might be his way of dealing with the insanity he was going through.

Post-traumatic stress disorder (PTSD) is a mental disorder that can develop after a person is exposed to a traumatic event, such as sexual assault, warfare, traffic collisions, or other threats on a person’s life.

These symptoms last for more than a month after the event. Young children are less likely to show distress, but instead may express their memories through play. A person with PTSD is at a higher risk for suicide and intentional self-harm.

SEE ALSO: Parents Beware! How Man Was Caught on ‘Danfo Bus’ Feeding A Baby With His Sperm 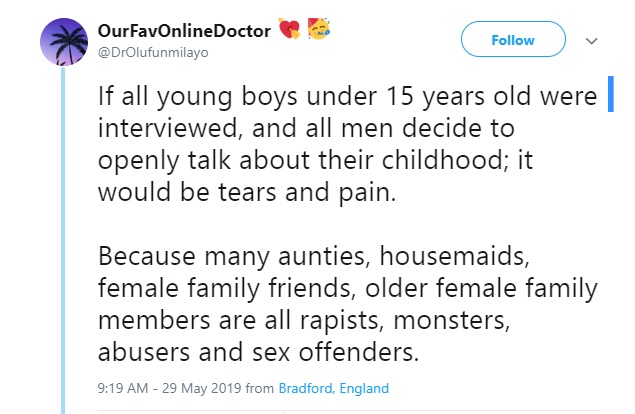 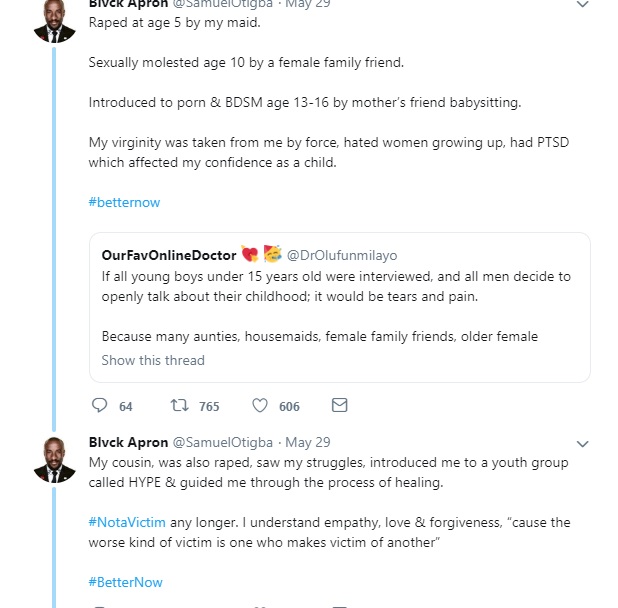