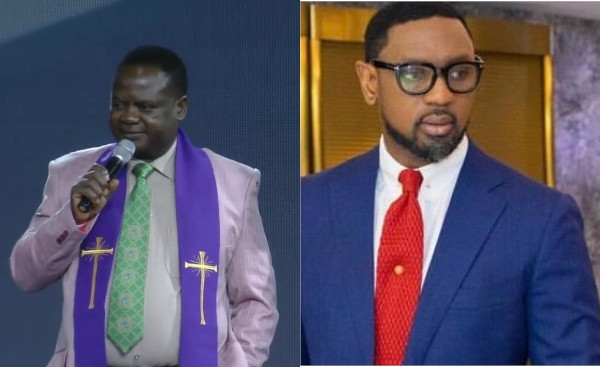 The last has not been heard of the rape scandal that engulfed the Commonwealth of Zion Assembly (COZA) church following the public interview granted by celebrity photographer and mum-of-three, Busola Dakolo where she appeared emotion-laden as she narrated how the president and senior pastor of the church, Biodun Fatoyinbo raped her multiple times when she was only a teenager.

According to new reports, Rev. Israel Akanji, the North-Central Chairman of the Christian Association of Nigeria (CAN) has thrown his weight behind the embattled COZA pastor, saying that God would restore the man of God even if he is found guilty of the rape allegation against him. The CAN Chairman backed his claim of the Senior Pastor of Commonwealth of Zion Assembly (COZA) being restored by God with the Biblical account of the condemned thief pardoned by Jesus Christ at the Cross of Calvary.

The Pastor said while preaching to his members at the First Baptist Church in Garki area of Abuja;

“”I still pray for that pastor (Fatoyinbo). I am not sure he erred; I have no right to judge because I don’t know whether the accusations against him are true or false. It has yet to be determined but even if it is true, I still pray that God will restore him fully to the work of the ministry.

Individuals locked up by the EFCC who are seen to be the worst people on the face of the earth… we pray for them. And that church, we needed to go and speak and pray with them because of what they were passing through and that is what we did.

Now, people may have different opinions but I hold the bible as the pastor, First Baptist Church, Garki, Abuja. I have no regret that I went to that church (COZA). I didn’t go there to endorse evil but I wanted to say that even if you are the worst sinner, Jesus Christ still has a place for you.

He said critics should always ask, “What will Jesus do?” before making judgments.

If Jesus were in our generation, he would be criticised for things he did. So, is it what people say that matters? Not in all cases. Yes, some things people say matter but when it has to do with eternity and the kingdom of God, it doesn’t matter what anybody says.

I pray that all those who have seen this as an entry point to fight the Christian faith in this nation will fail in the name of Jesus. God, I pray for that Pastor, Biodun Fatoyinbo. He told me he gave his life to Christ in the Baptist Student Fellowship of Emmanuel Baptist Church, Ilorin.

I didn’t go there (COZA) because he was a Baptist. I didn’t know he had anything to do with Baptist. I just went and he saw me as a father. I thank you, God. And I pray that you intervene such that the needed correction should there be any, be made

And God, you, who denied Peter after he denied you in your mercy, you will restore your servant.

I pray that the family which felt wounded, should that be true, please heal their minds, restore them as well.”

Rev. Israel Akanji had few weeks ago paid a solidarity visit to COZA with Rev Dr Samson Jonah the CAN Chairman in FCT,