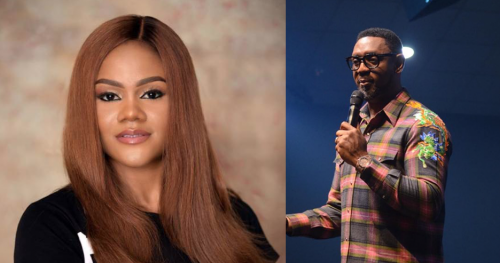 The ongoing rape case between mum-of-two, Busola Dakolo, and COZA pastor, Biodun Fatoyinbo, keeps evolving. New updates about the contents of the court papers from both ends will leave you intrigued.

According to reports, in the lawsuit filed by the clergyman on September 20, where he asked the court to strike out the rape case filed against him by the mum-of-three, pastor Biodun argued that the suit wasn’t filed within three years of the occurrence of the event complained about, and should be dismissed without the need to hear it as it had become ”Statute barred”, that is, a case that is no longer legally enforceable owing to a prescribed period of limitation having lapsed.

The clergyman also asked the court to dismiss the complaint on grounds that the allegation is ”incompetent and frivolous”. But the accuser who is also the wife of singer, Timi Dakolo, has said she is still haunted by the damage inflicted on her after.

Busola stated this in an application filed before the High Court of the Federal Capital Territory in Abuja to dismiss the preliminary objection filed against the rape case she instituted against Fatoyinbo in June.

Busola in her repsonse to Fatoyinbo’s application, told the court in a sworn affidavit filed by her counsel, Pelumi Olajengbesi, that the injuries, wrongs and damage done against her by Fatoyinbo continue to haunt her and cause her fresh emotional injury.

“That contrary to paragraph 9(a, g and h) of the applicant’s affidavit, the wrongs, injuries and damage done to her by the applicant (Fatoyinbo) are continuing and that she continues to experience fresh emotional injury from time to time due to the acts of the defendant/applicant,”

the counter-affidavit she filed in response to Fatoyinbo’s objection read in part.

Responding to Fatoyinbo’s claim that she released the legal documents of her suit against him to the media, Busola said she never wanted a media coverage adding that the suit was not leaked to the press by her or anyone close to her.

The supporting affidavit read in part,

“That she or anyone acting on her behalf did not give the origination processes of this suit to the press or anybody whatsoever for publication.

That she was embarrassed by the several media publications of Monday, September 9, 2019, as relating to the suit as she never wanted any media coverage for the matter and was unpleasantly surprised that same was leaked to the press.”

Busola in June 2019, granted a tell-all interview in which she accused Fatoyinbo of raping her. She has asked him to write a personal apology letter to her showing honest remorse for his action. She has also asked the clergyman to pay the sum of N10 million to her as the cost of prosecuting the case.