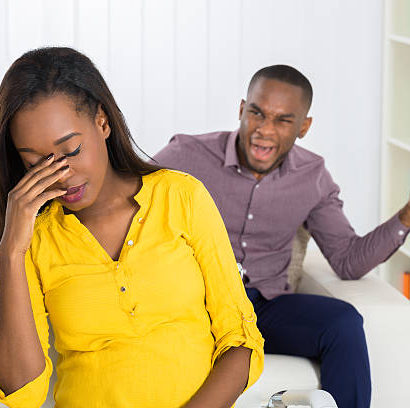 Story Of Kafayat Sanni, Nigeria’s 1st Female Fighter Jet Pilot Is Sure To Inspire You

You should count yourself lucky if you have never been a victim of emotional or physical abuse in a relationship. But even at that, abuse can still manifest itself in even the most loving relationships.

In fact, a lot of times, the love a person has for their partner can cause that individual to be blind to the abuses and mistreatment they are subjected to in the relationship. This explains why in some cases, a partner finds it hard to quit a relationship despite being abused and counselled to walk out of the union.

In such case, the partner ends up returning to the abuser and at times, it can result in more emotional or physical injury or even death.

According to experts, one thing about abuse is that sometimes it is subtle that it only takes an outsider to identify it. An abuser is usually good at practising their art subtly that it gets to a point that the victim does not even know they are being abused.

Relationship coaches, Stephanie Tran and Gemma Rudy, co-founders of Relationship Rules based in Singapore, said that love makes an individual trust their partner. Unfortunately, some individuals take advantage of the trust and use it as a tool to abuse their partners.

According to a Lagos-based psychologist and relationship coach, Mrs Esther Onifade, the signs of abuse were always there from the beginning of a relationship, except if a partner chose to close their eyes to the pointers.

Another relationship coach and Ibadan, Oyo State-based pastor, Noah Adewale, advised intending couples to stay vigilant from the onset of a relationship and “flee” should there be any sign of abuse. He said,

“I particularly caution ladies because they seem to be the ones vulnerable to abuse in relationship. Due to the society we live in, there is a form of pressure on single ladies to quickly hook up.

However, in the race to hook up, they can be exposed to danger. There are usually signs to know if a partner is abusive and when they are ignored, it can spell doom for the relationship in the long run.”

According to Tran and Rudy of Relationship Rules, abusive partners feel entitled enough to tell you how to spend or save your money and other resources. They feel they have ownership of your finances because you are in a relationship together. Be cautious if you see any sign of this in your partner. The experts also cautioned against putting up with a partner who always uses money to exercise control in a relationship.

According to Ms Bonnie Koehn, a psychologist based in the United States, abusers like to assess how much you will take. They will start out by testing you with small arguments to see if you’ll forgive them. Koehn told the HuffPost:

“Over time, these fights will get as big as you let them. They increase so gradually that you don’t realise you’re falling deeper into an abusive situation. The common element of these tests is that they usually make absolutely no sense. You will not be able to figure out what you’ve done wrong or why you’re apologising.”

At first, superiority can look like confidence, but with an abuser, it can turn out to be egomania or abrasive arrogance. At its worst, it can be sociopathic narcissism. Koehn said,

“Healthy people have no need to belittle others. They feel that everyone is equal and there is room in the world for everyone to be great. Women are love optimists and can spend years hanging on promises.

But sadly, it is just not statistically likely that an abuser will change. The world is full of healthy people and happy relationships. Don’t be afraid to trust yourself and start again. It’s not easy to walk away from an abusive relationship. But I promise you, life is better on the other side.”

According to Adewale, it may seem romantic if a partner wants to know everything about where you go or who you meet. However, when it gets to a point where a partner always asks questions like – Where are you? Where are you going? When will you be back? Can I read your texts? What’s your Facebook password? Why didn’t you call me? How did you know that guy/lady? – you need to be careful. Adewale added:

“You should not be afraid to say no. Tell your partner to respect your privacy. And pay attention to the response you get when you ask for privacy. It should be accepted without question.

SEE ALSO: A Survivor, Thembi Maphanga Shares Deep Thoughts With Women In Abusive Relationships And It Is Explicit

Onifade cautioned against marrying a partner who blames you for everything bad that happens in the relationship and never takes blame for their faults and actions.

“Abusers are messy perfectionists. They can never go wrong, so they think. They believe if anything goes wrong, it’s because you don’t know how to do it. Run away from such a fellow,” she warned.

Similarly, Tran advised lovers to be wary of those who demean or diminish someone by always hurling insults and hurtful comments on them. She said it showed that such a partner lacked respect for them.

According to Adewale, this point resonates with women more. The cleric said one sign of an abusive man was that he wouldn’t acknowledge the parts of a lady’s personality that make them who they are. Such an abusive man makes a lady down her core beliefs and principles because he feels he is the only thinker. Adewale said,

“A lady can learn good things from a man and vice versa. But, a man should not think he owns a lady and so everything he says is final. As a matter of fact, I learn a lot from my wife because I don’t silence her. I allow her to express herself and it’s been beneficial to our relationship.

“An abusive man doesn’t allow a woman to express herself and dictates how they should relate with people, whom she should see, what job she should take, how she should speak and so on.

“This attitude will increase over time if a lady doesn’t flee at the right time. If she marries such a man, she will ultimately lose her identity.”

Violence of any kind

Of course, physical abuse is the worst case scenario. An abuser may test the limits of emotional abuse for a few years before it becomes physical. Often, violence occurs once there is a certain level of commitment. According to Koehn, statistically, initial acts of violence take place after an engagement, a wedding or the conception or birth of a child. She said:

“If you see any signs of violence (physical fights, roughness with a pet or child, cruelty to strangers, damaging your belongings) prior to these milestones, get out as soon as you can. It will only get worse.”

Koehn, however, cautioned against what she described as ‘love-bombing’ should there be any reason to quit. She added,

“Abusers may use love-bombing to win you over. They’re full of compliments and offer intense attention when trying to win a woman’s heart. They will tell you you’re unlike anyone else they’ve ever met. They can’t live without you and they have never loved anyone as much as you. Putting you up on a pedestal ensures that you’re reliant on them to take you down.”

Onifade further advised against allowing partners to compare them with their exes. She said,

“For instance, if your partner describes their romance or sex life with their ex as ‘passionate,’ you should ask questions. Find out what that means.

Even if they describe their ex using derogatory terms, question it. The fact that things ended badly doesn’t mean degrading an ex is right. Assume that whatever they say about their ex will one day be said about you as well.”

Onifade urged singles to take the indicators above with seriousness to avoid falling into an abusive relationship. According to the psychologist: