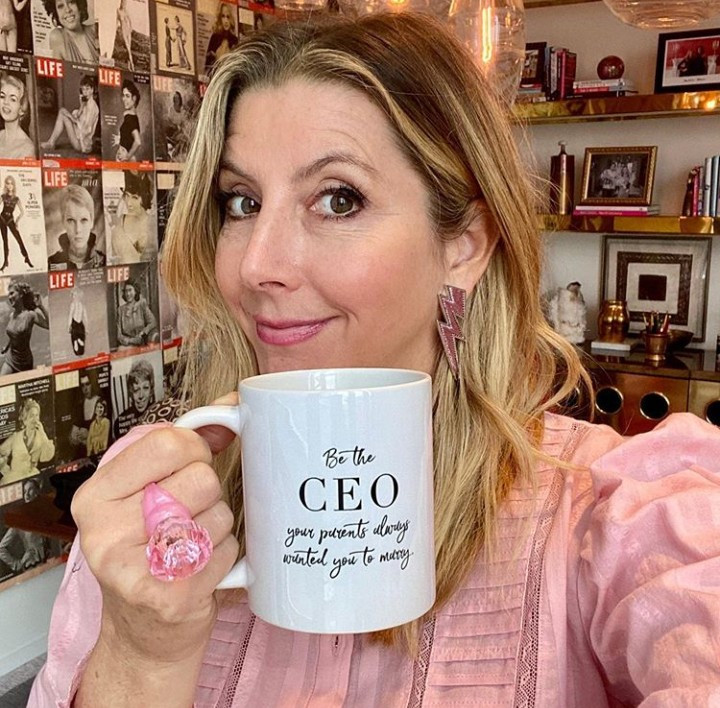 Sara Blakely, the founder of Spanx, has shared an Instagram post directed at single women who will be pressured by their family over the holiday for not being married. The self-made billionaire, who got married at 37, said she too was pressured to get married for almost 2 decades of her life. The mum-of-four revealed in her instructional Instagram post revealed that she was similarly pressured when she was a single woman.

Sara said though she was pressured to marry early, she saw the limited options her mother and grandmother had as women, and this fueled her desire to be the CEO of her own life, instead of searching for a husband. According to her, when she finally met her husband, she had already built a global brand and, so far, he has been the best husband.

She went on to advice women to “be the CEO your parents always wanted you to marry.”

Sharing a photo of herself holding a mug with those words, she wrote:

“Be the CEO your parents always wanted you to marry! As you head home for the holidays this week… a lot of you will be asked THAT question, you know, the one you hear every year, (the one I heard for almost two decades): “SO, when are you getting married?” Cue the blank stares and awkward silences.

There has always been a huge amount of pressure, especially on women, to get married… and to marry someone successful.
I didn’t get married until I was 37.

I remember going out to eat alone A LOT in my 20s and 30s and getting looks from people who felt sorry for me. Well-meaning women used to say to me, “it’s ok honey… you’ll meet a nice man someday…” It was rare that anyone ever encouraged me to stand on my own two feet and to have dreams for myself.

I saw the limited options my mother and grandmothers had and it fueled my fire to be the CEO of my own life instead of searching for a husband.

I eventually did get married to the best hubby @jesseitzler, but it was after I started @Spanx, built a global brand and became a CEO.  Tag anyone who has experienced this too. Or share your similar experiences below”