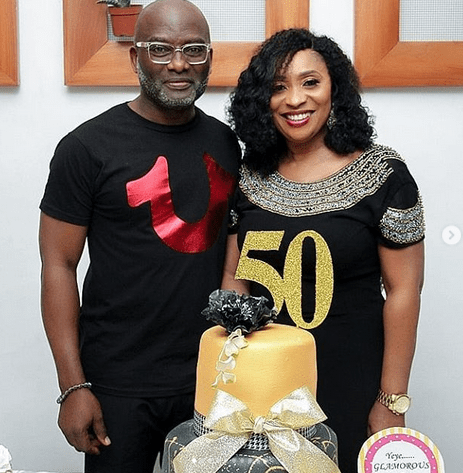 The love story of music executive and dad, Dayo Adeneye, and that of his wife, Caroline is one that will remain fascinating, no matter how often it is told. It was Caroline’s 50th birthday last weekend and the couple marked the day in style. A low-key celebration, still, the couple did not miss to reflect on their marriage of nearly two decades and how their amazing love story was birthed.

According to the love birds, they both were not contemplating a relationship, let alone marriage many years ago when their paths crossed, but Dayo, fondly called D1 who was newly divorced at the time had his father to contend with despite his own reluctance to seek love again so early.

READ ALSO: Marrying Someone With Whom You Share Many Things In Common: There’s A Lot To Learn From Prof. And Dr. Bakare’s Over 26-Year Beautiful Marital Journey

His father who apparently did not wish for his son to be unmarried for much longer deemed it wise to be on the lookout for a suitable woman for his forlorn son, and that was how Caroline came into the picture.

Recalling how she met him, Caroline who runs Sierra Global Concepts Ltd said:

“I met Dayo in his father’s house, actually through his father. I had gone visiting my aunt who was also my class teacher, whom I hadn’t seen in about 12 years.

I was unaware that Dayo’s father noticed me and took a special interest in me. He was to later direct his son’s interest to me and over time the relationship developed, from just being friends, we decided to take it further.

There must have been something my father-in-law saw in me that I don’t quite understand till date. In fact in connivance with my aunt who eventually succumbed to his constant pestering,

I began making frequent visits to her just so, he would make his son take an interest in me. Eventually, Dayo’s curiosity about me got the better of him.”

“We met through my late father. I was just newly divorced and my father was practically breathing down my neck to remarry.

He kept telling me about two ladies who frequently visited one of his tenants who happens to be Caroline’s aunt.

At his prompting, I got to meet them, that is Caroline and one of her relations. I liked Caroline instantly, asked her to dinner and the rest as they say, is history.

Even though we dated for about two years and grew to become very fond of each other,

Bolanle Ninalowo Gets More Honest On Marriage, Infidelity, Retracing His Step To Get Back His Wife And More

I knew almost immediately we met that she was the one I would eventually end up with but like I said, I wasn’t too keen on marriage having just come out of one,”

Unlike Dayo, Caroline didn’t quite know she would end up being with him.

“I didn’t quite know. I went into the relationship with an open mind but with slight reservations because he works in the media, meaning that he is a public person.

At a point I even began to withdraw because of the nature of his job but the pressure from my father-in-law was such that I had to stick with him. He monitored both of us like his life depended on it.

It was like I was dating my father-in-law. I was practically the last project he completed before he passed on two years after our marriage.

He was indeed a master strategist. But over the course of time, I got hooked and gradually began looking forward to seeing and being with Dayo. In fact three months into the relationship, he proposed to me.

Both of them have been happily married for almost 20 years now.