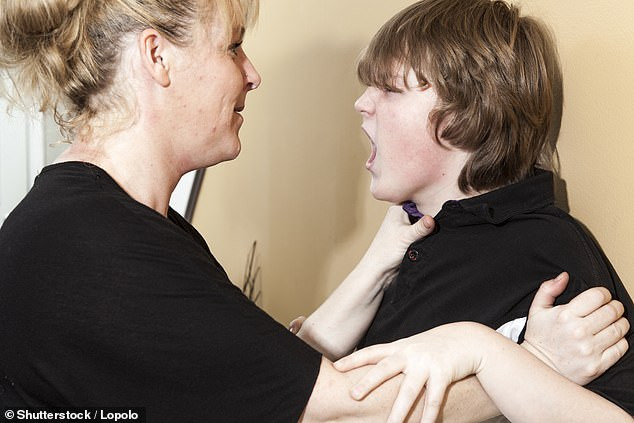 Child-to-parent abuse (CPA) is more common than we think because it is highly under reported. In the UK alone, police figures revealed a 30 per cent rise in domestic violence offences by sons on their parents since 2010, to 5,294 last year, while of violence from daughters has doubled to 1,598.

There have also been increased reports of teenagers attacking their parents during the Coronavirus imposed lockdown.

According to stories published by pegsupport.com and adoption uk.org, a lot of parents don’t report cases of violence perpetrated by their children because of fear of losing them or the shame it brings within their family or community.

Mothers who have suffered the domestic abuse of being beaten, attacked and bullied by their own children have come out to tell their stories and it is heartbreaking.

Read some of the stories below…

Cowering in her bedroom all night, Caroline’s heart pounded. She knew the chest of drawers barricading her door offered scant protection from the potential killer in her home, who had threatened to suffocate and poison her.

Caroline’s terror was complicated by a conflicting urge to love and protect, because her attacker wasn’t a hardened criminal, nor a violent husband, but her 15-year-old daughter, Daisy.

A teenager who enjoyed baking and art and whose middle-class upbringing seemed to offer stability, Daisy had nonetheless waged a two-year campaign of abuse against her mom. Caroline narrated:

”She’s a loving girl, but it’s as if she has a switch. I’ve had black eyes, cuts and bruises all over my body. It was horrific and heartbreaking. If I were being abused by my partner it would have been different. Child-to-parent violence is horrific, but it’s not spoken about. I feel I’m betraying my daughter’s trust by talking about it now.”

Daisy’s behaviour changed when she was 13 according to her mum.

‘She started pushing boundaries, swearing,’ says Caroline, who split up with Daisy’s father when she was 4 and has an 8-year-old son from a subsequent relationship.

Daisy started hitting and headbutting Caroline when she wasn’t allowed out or to use her phone. At 14, Daisy started using knives and saucepans to attack her mother. She said:

”She threw whatever she could get her hands on. Sometimes she’d scream that she hated me. I was constantly on high alert.”

If friends and family asked how she acquired her cuts and bruises, she told the truth. ”I didn’t want to minimise what had happened. They didn’t know what to say or how to help,” she says.

Daisy, nearly 6ft, used her height to intimidate her 5ft 3in mother, and started attacking her 6-year-old brother:

”She’d pin him down and punch him, or wake him up in the middle of the night and say she was going to kill him.”

In terror, Caroline moved her son into the bedroom she shares with her partner.

At a meeting with social services last July, Daisy calmly revealed she had researched how to kill her mother ‘in seconds’ using suffocation and cleaning products. ‘She said it would be “fun”.

“To hear her say she wanted to kill me and know she meant it was chilling. She was too high-risk to be taken into care,” says Caroline, who barricaded herself in her bedroom.

”I didn’t leave my room — I wasn’t prepared to play Russian Roulette with my life. I was too panicked to sleep. I felt sadness, fear and desperation.”

Catherine from Staffordshire spoke about the abuse she suffered from her 10-year-old son, Richard.

”I love him, but I don’t like him, and that’s a horrible feeling,” she says, through tears, explaining how Richard became aggressive 18 months ago after she and husband Michael, 37, bought him an Xbox.

”When we wouldn’t let him finish his game he began throwing things. When I told him that wasn’t nice, he’d retort, “What are you going to do about it?”’

”He hit me with such force I thought my nose was broken. There was blood everywhere. He didn’t apologise — he told me I’d made him angry.”

She told friends and family the black eye was caused by walking into a cupboard: ‘Above all, I feel embarrassed.’ The only person who knows the extent of the abuse is dad Michael, who Richard has never attacked.

Catherine insists if she were stricter, it would make Richard angrier still.

”I can see the anger in Michael’s face. He’s heartbroken that someone is essentially abusing his wife. A health supporter has seen him at school and said there’s nothing wrong with him— and to try to ignore it. They say he hits me because he cares about me most. But as he grows, I worry he could kill me.”

3. Miranda Rogers, whose 16-year-old son Tristan has been violent to her since he was nine also shared her sad story. In her words:

”People would be shocked if they knew ‘I’m worried about people judging me, or that I might lose the children.”

Miranda lives with her husband in a West Country village. But she says:

”I lie in bed at night wondering where I went wrong to have a son like this. I love him unconditionally, but as he gets older I worry he’ll break my bones.”

The deputy manager of a nursing home, who quit her job to raise her 5 children aged between two and 18, said she first noticed second child, Tristan’s change in behaviour after her only daughter was born 9 years ago. She said:

”He started pushing boundaries and saying he hated me.”

When Miranda caught Tristan smacking his 5-year-old brother, she intervened and he punched her in the mouth.

”I took the two youngest children to my bedroom and cried. When he calmed down he said sorry and that he “just got angry”. As his mother, of course I forgave him.”

Miranda explained the bruise to friends as an ‘accident’ and when Tristan pushed her into a door frame after an argument aged 11, she blamed that bruise on playing with her 3-year-old. She revealed:

”They have to work for their pocket money and tidy their rooms. I’ve taught them there are consequences to their actions. But if I send Tristan to his room, he’ll smash it up.”

Tristan’s rages increased as he became a teenager.

”He pushes me so hard I’m knocked to the floor,” says Miranda, who at 5ft 3in is dwarfed by her 6ft son.”

SEE ALSO: Here’s Why World Organisations, EU And UN Are Asking Schools To Include Anger Management In Basic & Civil Education

Months ago, after Tristan punched a door, Miranda took him to A&E, admitting to a nurse that it happened because of his temper:

”She said I should speak to our GP to help with his anger, but Tristan cried and begged me not to take him. And I can’t drag him there — he’s bigger than me.

Perhaps because I do most of the childcare, Tristan has never been violent to his father [a 40-year-old warehouse operator].

My husband gets angry on my behalf,’ says Miranda. But Tristan also plays us off against each other, accusing me of winding him up. After he’s been violent he usually apologises, and tells me I must hate him. I say, “I don’t hate you, but I hate the way you behave”.”