News, News Around the World, Research 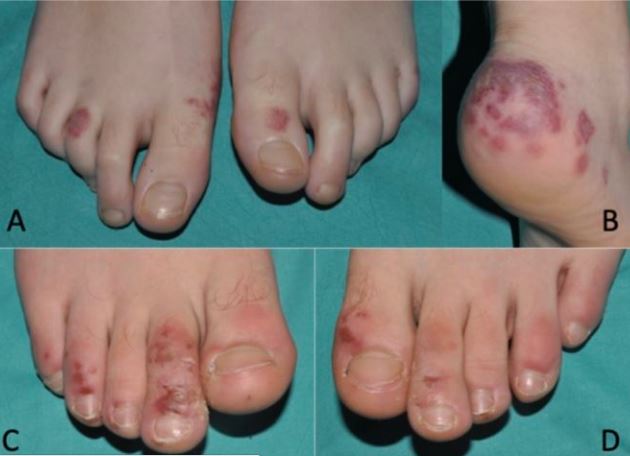 Since the novel coronavirus was discovered, researchers continue to work overtime to grasp the mysterious illness and its varied symptoms. Nearly every day, a new study reveals more insight into how the coronavirus or COVID-19 impacts the immune system.

The latest include a study that links evidence between the virus and “COVID toes,” discolored lesions that appear on feet and hands amongst children and young people.

“Our findings support a causal relation of SARS-CoV-2 with COVID toes. Endothelial damage induced by the virus could be the key mechanism causing these lesions. Furthermore, vascular damage could also explain some clinical features seen in patients with severe COVID-19.”

Another recently published study concludes that anosmia and dysgeusia, common symptoms of COVID-19 that results in loss of smell and/or taste, have the potential to linger longer than other ailments related to the virus.

The Italian-lead study relied on data from 187 COVID-19 patients who were being treated at Treviso Regional Hospital in Italy in March. It found that 113 patients — approximately two-thirds — experienced a loss of smell and/or taste up to two weeks before they tested positive for the virus.

Four weeks after the patients’ infection dates, about half stated they hadn’t fully recovered their lost senses. The researchers revealed:

“Although altered sense of smell or taste showed an improvement in most cases during the course of the disease, these symptoms were still the most frequently reported by patients with COVID-19 four weeks after testing.”

One thing that is for certain is that there’s still much more to uncover about the disease, which can manifest differently in different people.

Anna Banerji, an infection and public health specialist at the University of Toronto, suspects she contracted the virus in March and says she still can’t smell properly. When it comes to the amount of research being done on the virus, she says there’s a lot of noise out there.

“There’s a rush to get the papers out,” she tells Yahoo Canada. “That can lead to spreading misinformation.”

She points to the attention hydroxychloroquine received recently when it was suspected to be helpful in treating the virus. In the end, there wasn’t enough evidence to prove as much.

Since COVID-19 hasn’t been around for a full season, the knowledge around it is still evolving. Some predicted that infection rates would go down during the summer due to the warmer weather, but as numbers climb in places like Florida, California, and Brazil, that theory is proving to be inaccurate.

When it comes to understanding the virus, Banerji says COVID-19 is called the great imitator, since it takes on many symptoms associated with other illnesses. Patients have experienced everything from diarrhea, rashes, respiratory problems, and lung damage, to name only a few. She added:

Dr. Stephen Hoption Cann, a clinical professor in the school of population public health at the University of British Columbia, says it can be challenging to understand the symptoms of COVID-19, especially when patients are being prescribed drugs. The professor said:

“One thing we see in these patients in that they’re taking a lot of drugs, some experimental and some less experimental. You’ve got these symptoms occurring and patients are on a variety of drugs so it’s difficult to tease apart which ones the drugs people may be taking to treat the illness and those that are caused by the infection itself.”

Despite all the unknowns surrounding the virus, Hoption Cann says researchers are pretty far along. He suspects there have been approximately 30,000 medical articles published on COVID-19, and now it’s a matter of amalgamating that information.

That way, it can be passed on to subgroups, like pregnant women, elderly patients, or those with other diseases like diabetes, to help them understand what they can expect.

Another new study found that infection with COVID-19 can lead to brain damages, including delirium and nerve damage, the study by researchers at University College London (UCL) showed on Wednesday.

According to the researchers, since COVID-19 broke out, there appeared to be a “concerning increase” of a rare brain inflammation known to be triggered by viral infections.

In the UCL study, nine COVID-19 patients with brain inflammation were diagnosed with a rare condition called acute disseminated encephalomyelitis, which is typically seen in children and can affect both the brain and spinal cord. They said that some of the 43 patients studied did not have respiratory symptoms.

ALSO READ: See The Three New Coronavirus Symptoms That Have Been Added To The Official List

Dr Ross Paterson, of UCL Queen Square Institute of Neurology, and joint first author on the study, was quoted by local media as saying that “we might not yet know what long-term damage COVID-19 can cause.”

As a result, the researchers called for systematic surveillance of brain complications as a result of COVID-19 infection.