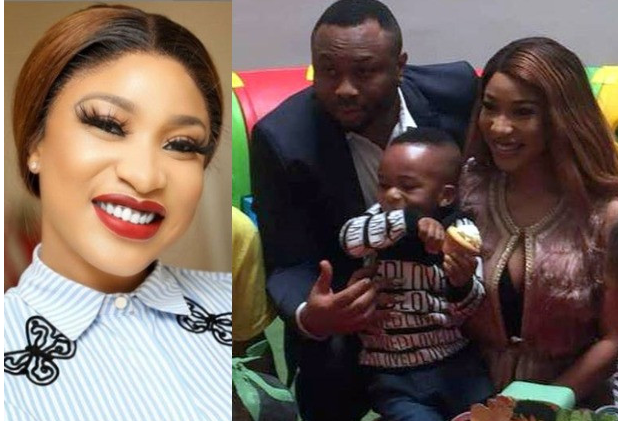 Celebrity mum Tonto Dikeh, had an interview with journalist, Dele Momodu on Sunday where she revealed that she has forgiven her ex-husband, Olakunle Churchill.

Tonto while speaking on the importance of forgiveness, said she came to the realization that forgiveness is not about the next person but about one’s self after someone she has a lot of respect for educated her on the subject.

The single mum who shared that partly forgave Churchill for the sake of their son, King Andre also said she chose the path of forgiveness after reading the bible verse that preached forgiving others a s a prerequisite for receiving God’s forgiveness.

When asked about her attitude to forgiveness and vindictiveness, she said

A man I love and respect always, talked to me about forgiveness and I have come to realize that forgiveness is not about the next person.

Forgiveness is a whole lot and I only just realized that the bible says that if we do not forgive, God cannot forgive us. All these things are in the bible but it never really made an impact to me until someone really explained it.

So today I would tell you that for me it comes really easy. I forgive alot but I just don’t like to get provoked by the things that you do after it. I think forgiveness is an essential for ones growth”

Asked if there is anyone she would never forgive in her life, she said

As of today, there is nobody I hold a grudge on but there are people who I have forgiven but I would never have a relationship with again” she said

Asked if she has forgiven her son’s father, she responded

Oh yes, especially him. I forgive him and wish him the best, for my son’s sake. I do. Why not?”

Hours after she revealed that she haD forgiven Churchill in the her interview with Dele Momodu, the actress has pointed out that she isn’t asking for forgiveness in return.

‘‘YES, I SAID WHAT I SAID..
I forgive every single person who tried to hurt me(Knowingly and Unknowingly).

I deserve all the good things of life so yes I do accept the gift of forgiveness..
`to Yes you may not DESERVE/Or asked for my forgiveness but I’m giving it anyways not for your sake but FOR MY GROWTH..
Because I love myself so much, I am giving myself a chance to also be forgiven by my Heavenly Father!!
Ooo No I AINT asking for forgiveness in return, NEVER EVER WILL..
I am doing the right thing just for ME PERIOD!!